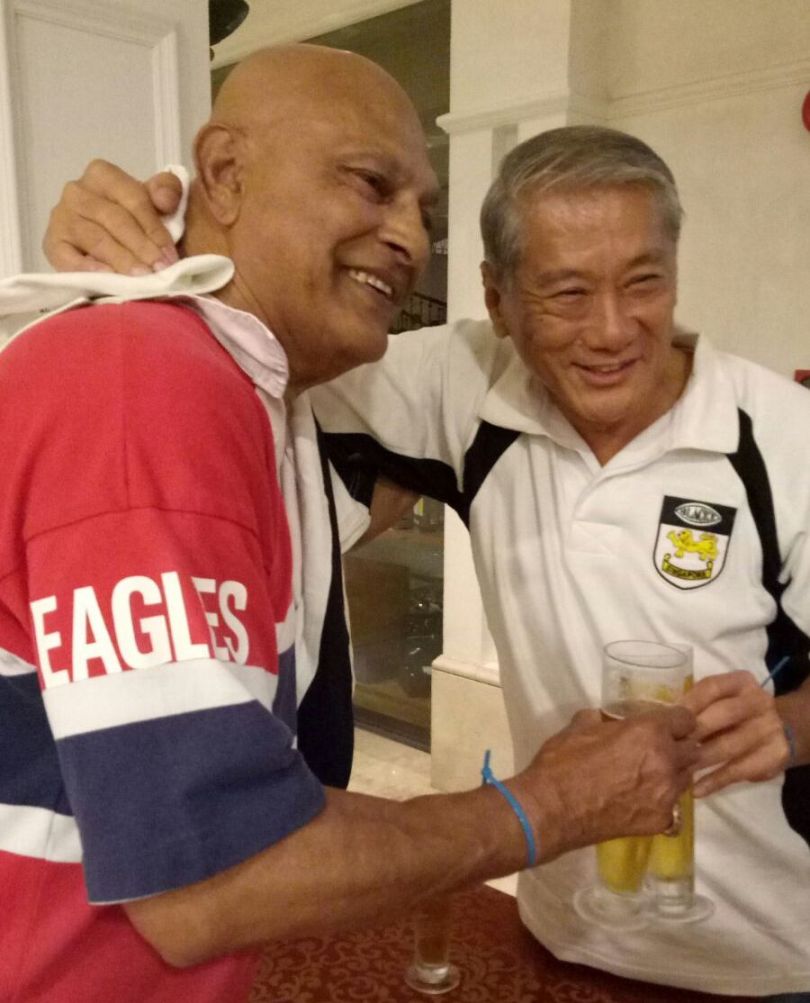 THEY started in the 1950s as a motley bunch of rugby die-hards, with big holes in the pocket, so much so that players had to provide their own jerseys and since  black-coloured tops were the easiest to find, the club started as “Blacks Rugby Football Club”.

From the darkest times of no sponsorship or support, and impoverished black jerseys for their games, rose a jewel-of-a-club that went on to produce Singapore’s finest players, in the 1960s and 70s, who played with genuine pride and passion, for club and country.

I attended the 60th anniversary of BRFC at Orchid Country Club over the weekend, and I was amazed as the founder-members, players and officials recounted the true, yet tough, beginnings and how these value-added grassroots values fired them to what, where, when, why and how they remain the oldest, yet proudest, Made-in-Singapore rugby club.

This traditionalist club still continue to open doors for the younger generation, regardless of personal or professional background, and the biggest feather-in-the-cap came in 1996 when the women’s wing was founded.

Drawn from all walks of Singaporean life and lifestyle, the fairer sex, with the injected influence of the discipline and dedication of their forefathers, stands out as the veritable driving force for the development of women’s rugby in Singapore.

“We’ve been 12 times champions of the annual National Clubs 7s and eight times champions of the National 15s Championships. Since 1998, the women’s wing has been steadily supplying its players to the Singapore 7s and 15s teams,” said BRFC President Peter Ong. “The men, too, continue to fly the flag high, with a constant flow of talent to the national team. And next year, we intend to revive the Blacks 10s, which has been a major regional tournament in the past.”

Little wonder, over the weekend, it was time for merry-making and bonding of good ‘ole ties, as past and present players celebrated the 60th chapter of an extraordinary sporting history.

From 1978 SNOC (Singapore National Olympic Council) “Coach of the Year” Natahar Bava to “Sportsman of the Year” Song Koon Poh and members of the “Team of the Year”, they hailed how BRFC has risen like the proverbial phoenix from the ashes to be the role-model flag-bearers in Singapore rugby.

This was the first-ever “Grand Slam” sweep of all three major awards in the sports accolades except for the “Sportswoman of the Year” award. The Singapore team went on to repeat another MRU Cup triumph, under coach Bava in 1982, but 1978 was indeed the year Singapore achieved rugby history by being third in Asia, first time ever, and winning the MRU Cup after 44 years.

“There is no substitution for hard smart work as running up and down Mount Faber 10 times on a Sunday morning as preliminary physical fitness preparation for the big matches,” he said. “This is one of the many components that must be addressed when preparing a champion national team. And, believe me, the results are evident and apparent.”

For the record, Bava ranks as a sterling track and field international, too, as he competed in the 1967 SEAP Games (now the South-east Asia Games) in Bangkok where he bagged a silver and bronze as part of the men’s 4x100m and 4x400m relay teams respectively.

Indeed, the Singapore-based Blacks can also take a lot of inspirational leaf from the world-famous New Zealand Blacks. President Ong said: “You have to understand, New Zealand is a very young country and rugby has put this country on the global sporting map.

“This country earned respect from the rest of the world for three things: What they did in two world wars, and to a lesser extent what they’ve done on the rugby field. So over time, rugby has become a major part of their club and national identity. And the current All Black team, the All Black teams of recent years, have always tried to add to that legacy, that history.”

Among the star-spangled founder-members were the late Koh Yeow Tong, who played in the Asian All Blues (a bunch of blue-ribboned sportsmen from Asia) in rugby, which challenged the mighty European teams. On field, he’s remembered as the demon sportsman, who played for both Malaysia and Singapore. And off the field, an impish gentleman, generous to a fault, always concerned with fellow players and officials

“In an unknown way, we wiped out the colonial-hangover mentality and proved that we could match the Caucasians. This started the rise of more Asian clubs to the fold and a new chapter in Singapore tournament history.”

For longer-term goals, with the younger core of players, President Ong says the participation mission remains high on priorities. To optimise accessibility and increase participation in modified and contact rugby through development programmes for players, teachers and coaches

“As the oldest and No 1 club, we must continue to set highest benchmarks. We’ve to seriously work on the younger generation with competition programmes which reflects players’ needs, find new heartland schools which will feed into and also facilitate transition between schools to club participation.”

And indeed there can be no resting on traditional laurels to be “rugby intelligent”. He says: “To be competitive at the highest level, we have to be smarter than everyone else. I’m not being arrogant about this: I’m merely pointing out that we have to think differently, manage our players more effectively, and constantly come up with ways of outplanning and outpreparing our opponents.

“It’s all about rugby intelligence. We don’t sit around intellectualising about the game for the fun of it. When we get around the table to map out the way forward, it’s for completely practical reasons. We tend to identify good talent earlier than most other clubs, because if we continue to get the development right – and we pride ourselves on this aspect of our rugby.”

Cheers to the good ‘ole Blackies.

Reflecting over six decades, they can distinctly look back with satisfaction at what they have achieved, both on and off the field, to be the right flag-bearers for club and country.