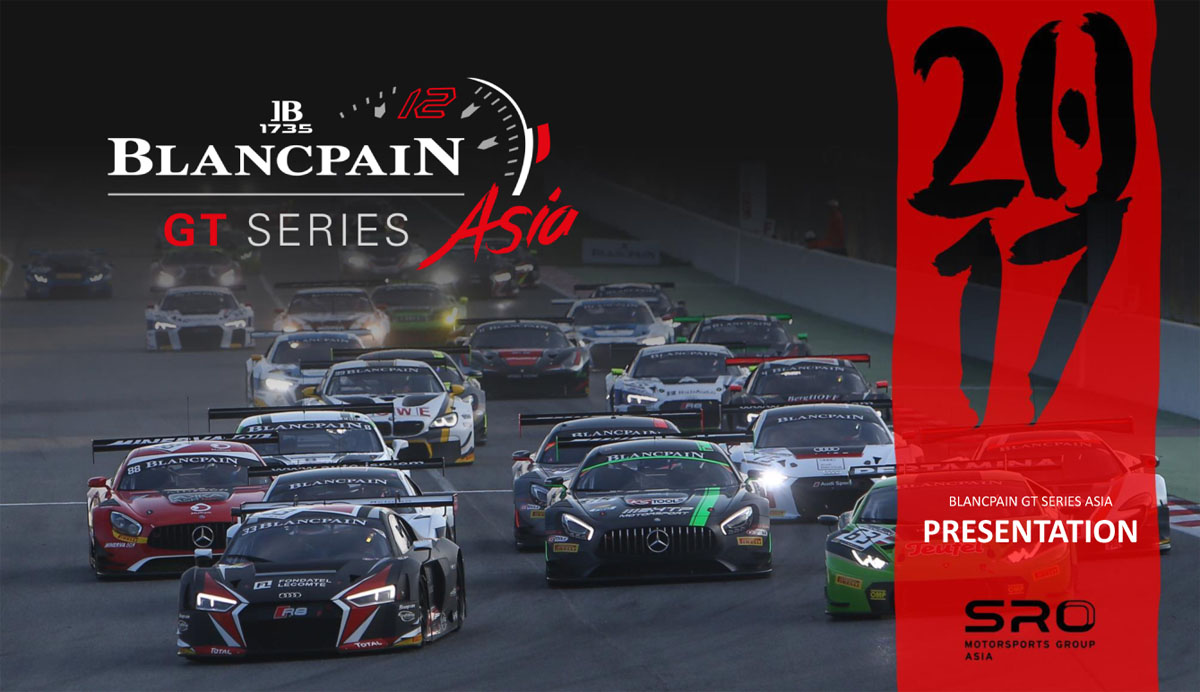 The inaugural Blancpain GT Series Asia campaign will feature a six-round, 12-race calendar in 2017, as well as a number of elements designed to offer teams greater value for money, opportunities and exposure throughout the season.

The promoter, SRO Motorsports Group, has pooled its experience of overseeing the world’s biggest GT3 Series – the European Blancpain GT Series – as well as national championships catering for GT4 cars, with that of respected leaders in Asian motorsport and its teams to devise a format and benefits specifically tailored to the region’s GT market.

The result brings together the best of both cultures to create a highly-professional platform equally geared towards professional and amateur drivers, while employing the same world-renowned BoP, sporting and technical expertise, and Pirelli tyres common across European and American GT racing.
2017 calendar.

The inaugural season’s six-round, 12-race calendar features a mix of Asia’s internationally renowned and newest domestic circuits. 2017 begins at Malaysia’s Formula 1 circuit, Sepang, in early April before moving on to Thailand’s only FIA Grade 1 track, the Chang International Circuit in Buriram, for two more one-hour races in late May.

These are followed by trips to Japan’s most internationally renowned motorsport destinations, Suzuka (June) and Fuji Speedway (August), ahead of two Chinese rounds separated by four weeks. The first of these takes place at Shanghai’s Formula 1 circuit in late September before the newly constructed Zhejiang Circuit plays host to the season finale in late October.

Scroll down for the complete 2017 calendar.

Weekend format and classes
Each Blancpain GT Series Asia weekend will follow the same format, which has been designed to maximise track time. Friday features two 45-minute practice sessions before another 30-minute session on Saturday morning. That’s followed by two 15-minute qualifying segments ahead of that afternoon’s 60-minute race. A second hour-long race then takes place on Sunday. Both races will feature a mandatory pit-stop and driver change governed by a minimum pit-stop time.

GT3 and GT4 cars will compete in the same race, albeit fighting for individual honours, which adds an exciting multi-class element. 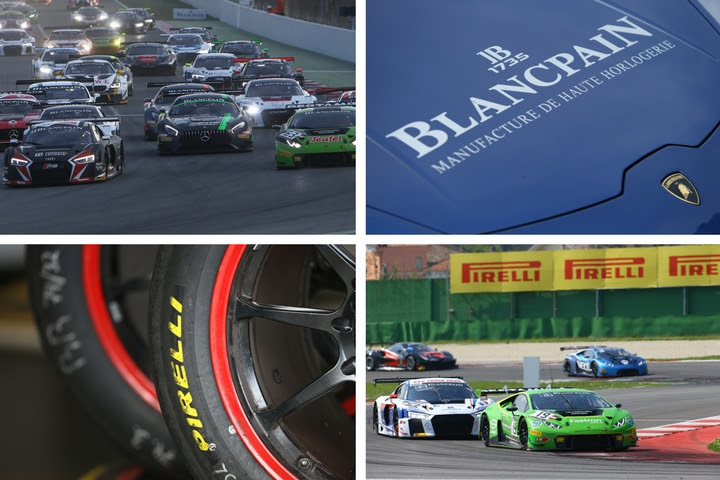 Pirelli: a tried and trusted GT partner
Pirelli has won the tender to become Blancpain GT Series Asia’s official sole tyre supplier. While other manufacturers expressed considerable interest, Pirelli’s P ZERO GT3 and GT4 tyres have consistently proven themselves in other SRO-promoted series. A sole supplier prevents teams from footing significant development costs, while the considerable existing data held by manufacturers, as well as European and US teams, can be shared.

Amateur drivers can easily switch between SRO-sanctioned series or contest one-off rounds of the Intercontinental GT Challenge without spending time and money testing unfamiliar tyres, or altering the car’s set-up and their driving style to suit. Equally, Pirelli’s GT compounds have been praised by amateur drivers for their durability, consistency and confidence-inspiring performance over a stint’s duration.

Clearly, a focus on amateur drivers proved a significant factor in Pirelli’s selection. But its continuing supply deal with Lamborghini Super Trofeo Asia (see information below) also emphasises the close cooperation between the package’s various stakeholders.

Greater value for money and prize fund
SRO has also focused on the often difficult logistics teams face when competing at venues across the continent and has taken steps to make the Blancpain GT Series Asia package more affordable.

Building on its successful European partnership, Blancpain GT Series Asia will be supported on all weekends but one by Lamborghini Super Trofeo Asia. This makes it more cost-effective for teams (and drivers, if they wish) to compete in both at the same event, while an amateur driver’s progression from one-make category to globally-recognised GT3 rules racing is also streamlined.

A further support series announcement, aimed at making the package even more cost-effective, is expected in the coming weeks. Finally, a substantial $300,000 prize fund has also been guaranteed throughout the year, with $50,000 available at each round. This will be split between the GT3 and GT4 classes, although only full-season entries are eligible to win a share of the money.

Hospitality, live TV, multi-language resources and dedicated logistics
Blancpain GT Series Asia will feature a number of elements designed to widen the exposure of its teams’ successes, enhance sponsor relations and aid general organisation. A dedicated central hospitality unit at all races provides teams with an area to wine and dine their partners. Four VIP guest passes are included with every full-season entry, while more can be purchased upon request.

In line with all Blancpain GT Series races in Europe, SRO’s Asian equivalent will benefit from professionally produced live streaming at every round, while TV exposure is also guaranteed across the continent and beyond. A dedicated logistics partner will help lower the cost associated with freighting cars and personnel across Asia, while standardised professional timing will be used at every round.

Experienced staff
Blancpain GT Series Asia will combine SRO’s world-renowned GT racing expertise with that of experienced Asian motorsport professionals. Blancpain GT Series Asia Championship General Manager & Director Benjamin Franassovici provides a wealth of experience earned over 20 years at SRO. Having first worked as FIA GT Championship Team Coordinator between 1997 and 2009, he has overseen the British GT Championship since 2011 and will already be familiar to many Asian teams through his work as Motul Sepang 12 Hours Manager and Macau FIA GT World Cup Coordinator.

Blancpain – Innovation is our Tradition
Founded in 1735 by Jehan-Jacques Blancpain, the watch brand bearing his name is the oldest in the world. Blancpain is currently engaged to the renewal of mechanical watchmaking and to passing on exceptional expertise from one generation to the next through constant investment in human resources, production facilities and research. This approach is its strength and the expression of our long-term vision, even though it goes against the tide of a certain tendency to seek immediate profit. From the creation of components through to watch design, Blancpain is distinguished by its ability to develop exceptional movements. Over the past ten years, the Manufacture has indeed developed no less than 35 new calibres. Through its various models, Blancpain preserves its heritage of precision and elegance, while also displaying an innovative and occasionally provocative spirit. Its range encompasses the sportive L-evolution line, the legendary Fifty Fathoms diver’s watch, as well as the classic Villeret collection, the high complication from Le Brassus collection and the Women models.

Pirelli – Official Tyre Supplier
Pirelli is a tyre manufacturer and world leader in the automotive industry. It has an exclusive relationship with over 50 racing series worldwide, including Formula One. Pirelli has a long and illustrious history in endurance racing, and has also claimed a huge variety of class wins in GT racing all over the world. The design of the new Pirelli GT tyres meets the needs of GT racing while maintaining the performance characteristics that endurance drivers have appreciated in the past.The slick tyres used for GT racing are branded Zero: just like the slicks that have become a central feature of Formula One. The name P Zero is used in the highest categories of motorsport such as GT racing.