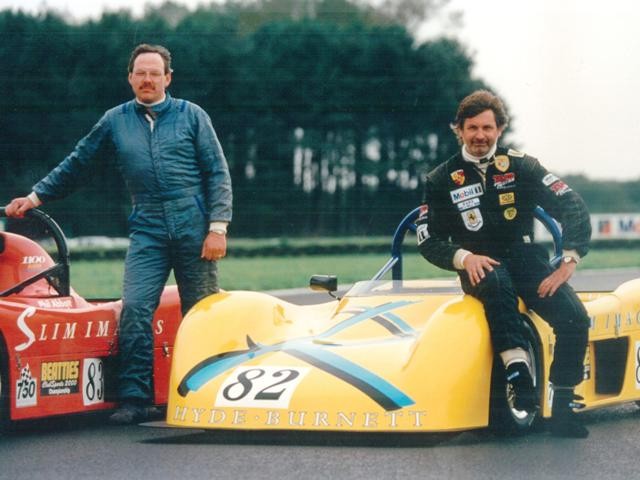 Equally you don’t call your cars Radical, unless you offer something innovative and unique, and that was exactly the philosophy of company founders Mick Hyde and Phil Abbott. They weren’t about to build ‘just another sportscar’, their approach was revolutionary and together they created a whole new niche in the world of motorsport.

Their original idea was to design a lightweight sportscar that utilised superbike technology and in doing so they conceived a car that was faster than a supercar, totally driver focused and intensely rewarding to drive. Radical was the first company to create a bespoke powertrain system for a superbike-powered sports racer. The cars were built not just for the discerning club racer but trackday enthusiasts too, and both types of driver enjoy unmatched levels of support as well as having the fastest cars on track.

Safety was always a high priority and remains so today, with Radical leading the way. It is the only manufacturer of club racing cars that can draw on knowledge from building carbon chassis LMP cars that have raced successfully at the 24 hours of Le Mans, around Europe and in the USA.

But the Radical philosophy extends much wider than just the cars. When the founders looked at the various race series available in the UK, none provided the type of racing they knew their customers would crave. So they started their own, and became the first manufacturer to bring long-format, doubleheader endurance racing to the club racer, and provided a comprehensive spares and technical support team at every event.

The iconic Clubsport model established the company in 1997, and it is still raced with enthusiasm all around the world. Its success was instantaneous and the full grids soon led to developments, the Prosport added wings, more power and wider slicks, but the team at Radical were never going to rest on their ever-growing laurels. In 2002 they launched the SR3, a genuine two-seater, road-legal track car, that wowed both the press and track drivers all over the world. It has become Radical’s most popular model to date and was soon followed by the compact SR4, a small, light and practical two-seater that proved to be the perfect successor to the original Clubsport.

Then, in 2005, Radical launched the big one.The awesome SR8, powered by the high-revving, 380bhp Powertec RPV8 engine, bringing Le Mans Prototype pace to the national racing scene. The mighty RPE RPV8 was designed, developed and manufactured in-house, and the car now holds several circuit out-right lap records, including the highly sought prize of the production car record at the Nürburgring Nordschleife. The latest-generation 2.7-litre SR8 RXsets lap times comparable to LMP machinery on a fraction of the budget, and continues to draw acclaim for established endurance racers the world over.

In 2011 Radical took the bold step of developing its first fully EC Type Approved, street-legal roadster the SR3 SL. Powered by a turbocharged Ford EcoBoost four-cylinder engine it opened up Radical ownership to a whole new market, rapidly establishing itself in countries such as Switzerland, Germany and Japan. Technology and processes developed in the design of the SR3 SL have since enabled Radical to create a ‘milestone’ car; the new RXC. Radical’s first-ever coupe is its largest and most advanced model yet and the company has high hopes for this sector-redefining GT car, delivering outstanding laptimes and usability in a package most cost-effective than any other rival.

Radical set out to create a new niche in the sportscar scene offering drivers incredible performance for a realistic price, and their success is born out in the sales figures. Over 1,600 Radical owners can’t be wrong.

Through continual product development, expansion into new markets and with a customer support framework previously unseen in the motorsport and track car industry, Radical Sportscars has now grown to become the world’s largest producer of racing and track cars.

During the company’s short but very full 17-year life it has written its own very successful chapter in race and road car
manufacturing. This has included designing the world’s favourite racing car, the SR3 RS (900 units sold over 11
years), designed and constructed its own racing-spec V8 engine (up to 480bhp yet weighing only 92kg), contested Le Mans five times (Radical SR9) and driven around the Nürburgring Nordschleife faster than any other road registered and road-legal car (6 minutes 48 seconds).

This,in addition to a host of other lap records and accolades from the global motoring press. The launch of the EC Type Approved SR3 SL in late 2011 put Radical on the extreme road car map, immediately scooping Evo magazine’s Trackday Car of the Year prize and obliterating Autocar magazine’s test track lap record at MIRA.

EC Type Approval was an ambitious step but though considerable investment and time the SR3 SL has become a European success story, opening up wide-scale Radical ownership to markets such as France, Germany, Switzerland and Eastern Europe.

Radical’s continuing commitment to reducing the cost of racing saw a raft of changes in 2013, including the launch of a new championship for novice racers, the SR1 Cup, which continues to be successful with a second successful season just completed and the champion crowned.

At the opposite end of the scale, Radical’s Masters Euroseries offers racing at Europe’s best GP circuits – such as Spa, Monza and Barcelona – with lap times comparable to LMP machinery but at far lower cost. Radical’s first closed-cockpit trackday and race car the RXC has been critically acclaimed by the motoring press for taking the Radical experience to a new, wider audience with a bigger platform and more advanced specification than any previous Radical.

The RXC V8 has already become a proven race winner against GT3-specification machinery costing over twice the price, and is rapidly gaining a reputation as the car to beat in Pro-Am GT, sportscar and endurance racing championships.

There is a Radical sportscar racing ladder that can take drivers from trackdays all the way to Le Mans and now the SR3 RSX joins this extraordinary range of cars, adding something new and attracting a wider audience to the Radical brand than ever before enhancing the ‘spirit’ of Radical by continuing to produce the most focused yet accessible and affordable track and road cars available anywhere in the world.