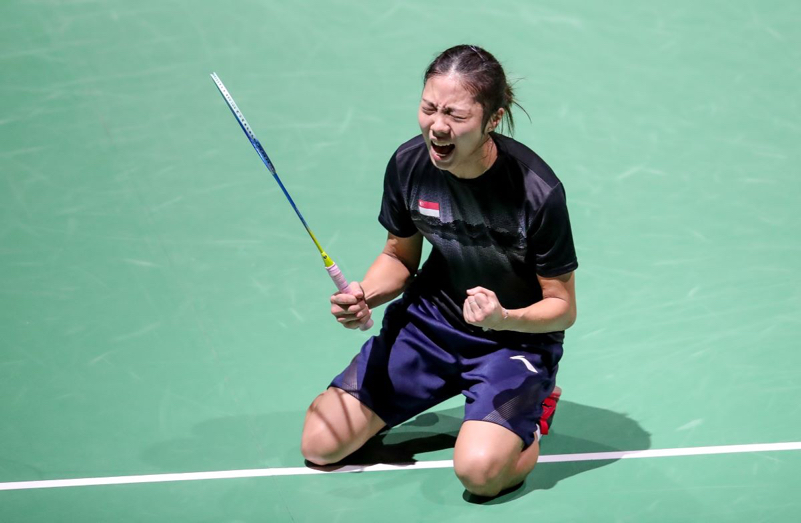 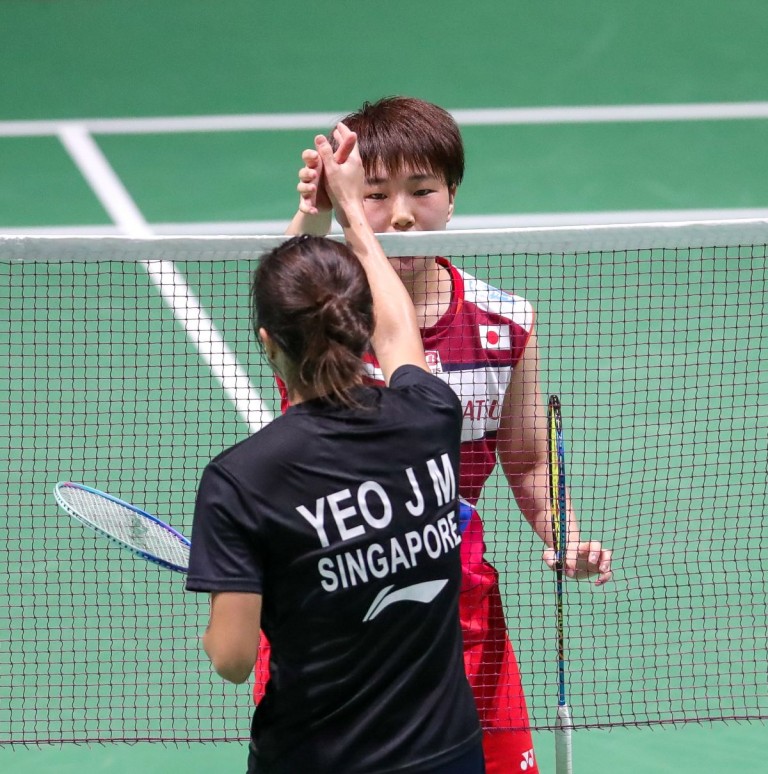 A soft-spoken Singaporean let her racket and steady shot-making do all the talking this evening as she sensationally ousted women’s singles top seed Akane Yamaguchi in the second round of the TOTAL BWF World Championships 2019.

Homegrown talent, Yeo Jia Min’s stock rose appreciably inside St. Jakobshalle as she earned loud applause for her 21-14 21-18 triumph over the world No.1 in just 40 minutes. The 20-year-old sank to her knees and yelled in delight at toppling one of the title favourites.

“From the start, I tried to focus on every point and not to make simple errors like I used to do and I tried to control my emotions,” said the winner.

“She is very good in defence so I tried to be patient and find chances to attack.”

And attack she did – unleashing an array of precise and powerful strokes; one scything through the hapless Yamaguchi as her rival closed in on the first game.

Yeo’s success came on the heels of her teammate, Loh Kean Yew’s upset of No.10 seed, Sameer Verma, in men’s singles last night. That result, plus their overall friendship, played a part in her victory.

“I think we motivate each other because we travel a lot together. We learn from each other.”

Refusing to get carried away as her achievement sank in, Yeo said: “I try to learn and improve from every match. This result will give me more motivation. My goal was to beat a seeded player because I knew I would face one quite early in the tournament. I’m happy but I still need to concentrate because every day is new.”

In addition, the giant killer hopes this outcome will inspire other youngsters in Singapore.

“In Singapore not many players train full-time, not many would stop their studies (for badminton). I hope more young players will want to do badminton full-time.”

As for her third-round encounter versus Vu Thi Trang of Vietnam, Yeo admitted “I don’t know her very well” but vowed to do the necessary homework in preparation for a shot at reaching the quarterfinals.

Meanwhile, Yamaguchi put on a brave face as she explained her lacklustre performance.

“I could not get into my rhythm. I was surprised by the opponent and got lured into her style of playing,” the Japanese star told media.

“Also, I was playing the shuttle into areas where my opponent wanted it, instead of into difficult areas. Those are the main reasons for my loss.”

The 22-year-old downplayed speculation that a recent hip injury may have contributed to her demise, noting it doesn’t hurt anymore. However, she conceded that it affected her training for the World Championships.

“I was not in peak condition and I did not reach some parts of the court as fast as I usually do.

Asked about her feelings, Yamaguchi replied: “I wanted to perform better but it doesn’t matter how I feel. I just want to move on and improve for the next tournaments rather than reflecting on this loss.” BWF