Home 2022 Byeong Hun An is #TOURBound after Eclipsing Points Threshold 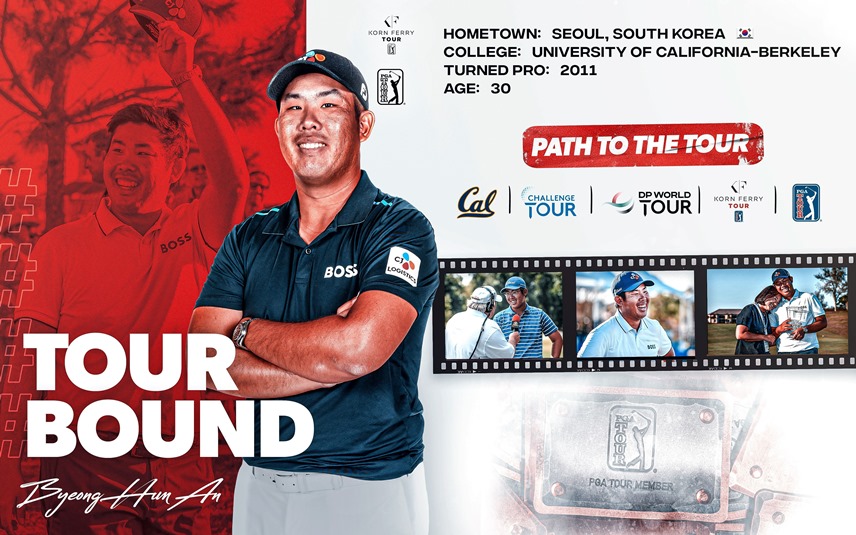 With a win at the LECOM Suncoast Classic in February, a T2 last month, and another trio of top-25s this season, South Korea’s Byeong Hun An (BEE-yong HOON AN, commonly referred to as Ben An) surpassed the new #TOURBound fail-safe threshold of 875 points.

The Korn Ferry Tour is now using 875 points as a fail-safe threshold to officially declare a member PGA TOUR-bound for the 2022-23 season.

“It’s great to be back on TOUR,” An said. “It was my main goal for this season, and to accomplish it early makes it extra special. There is always room for improvement. I’m still lots of points behind the leaders, so I’ll continue to grind my way up the list.”

An, who entered the 2022 season with three worldwide victories (most recent were a pair of 2015 wins), earned his first PGA TOUR-sanctioned win at the LECOM Suncoast Classic, held at Lakewood National Golf Club just outside of Bradenton, Florida. Roughly two months later, An posted a T2 at the Veritex Bank Championship. Those two finishes account for 745 of An’s 890 points this season.

A native of Seoul, South Korea who now resides in the Orlando area, An played predominantly on the PGA TOUR since he earned Special Temporary Membership in 2015-16 after a T2 at the 2016 Zurich Classic of New Orleans. An climbed as high as No. 24 in the Official World Golf Ranking, qualified for four consecutive FedExCup Playoffs (2017-20), represented South Korea in the 2016 Olympic Men’s Golf Competition, and played for the International Team at the 2019 Presidents Cup throughout his time on TOUR.

Prior to tenures on the PGA TOUR and Korn Ferry Tour, An left South Korea for the United States in December 2005 and attended the David Leadbetter Golf Academy in Bradenton, Florida.

An toured the junior golf circuit in the United States and eventually became the youngest winner of the U.S. Amateur Championship, capturing the 2009 title at Southern Hills Country Club as a 17-year-old with a resounding 7-and-5 win over Ben Martin.

An spent one season (2010-11) at University of California-Berkeley, where he played alongside four-time PGA TOUR winner Max Homa and PGA TOUR member Brandon Hagy.

An turned professional in summer 2011 and immediately made his way to the Challenge Tour, where he spent the next three seasons (2012-14). An played the DP World Tour in 2015, winning the BMW PGA Championship and earning Sir Henry Cotton Rookie of the Year honors. An’s other international victories came at the 2014 Rolex Trophy on the Challenge Tour, and 2015 Shinhan Donghae Open on the Korean Tour.

An worked his way toward Special Temporary Membership amid the 2015-16 PGA TOUR season via three World Golf Championships events and the 2016 Arnold Palmer Invitational presented by Mastercard, gaining entry into those events by virtue of either his standing on the DP World Tour Order of Merit or Official World Golf Ranking.

An gained entry into the 2016 Zurich Classic of New Orleans, where he solidified Special Temporary Membership with the first of his three career runner-up finishes on the PGA TOUR, via the Commissioner Exemption.