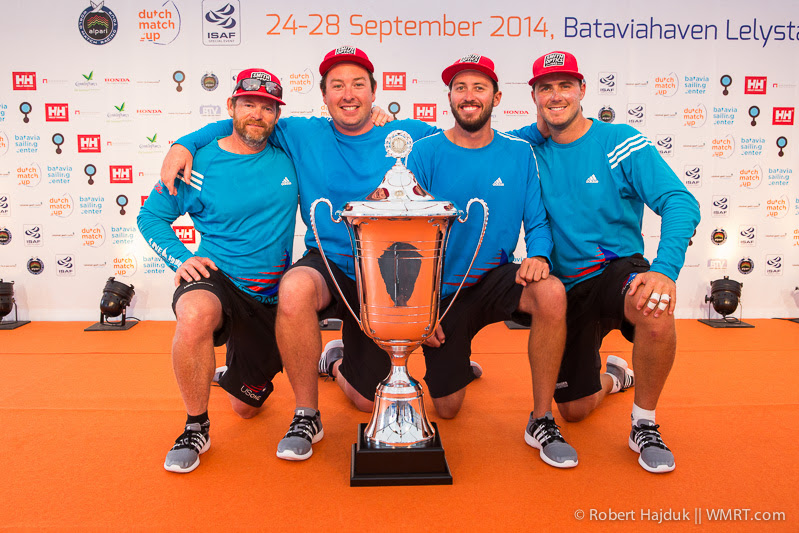 Taylor Canfield and US One have won the inaugural Dutch Match Cup after a thrilling final against arch-rival Ian Williams and GAC Pindar. The breeze was very light and patchy, creating multiple opportunities for lead changes. No race lead, however big, was ever safe.

Matches between the world’s top two match racing skippers are always aggressive affairs on the Alpari World Match Racing Tour (AWMRT). In the pre-start of the first match, Canfield stuck two penalties on Williams, leaving the British boat playing catch-up. However on the downwind leg, Williams found a sliver of stronger breeze by the harbour shore close to the cheering crowds in Lelystad. The British came close to rolling over the top of US One but failed to keep clear from a Canfield luff. Another penalty for Williams, then another penalty towards the leeward gate, and Canfield was uncatchable. 1-0.

In the second match, Williams got the slightly better start and converted that into a five-length lead by the first windward mark. Canfield sailed over to the shore on the second beat and used the cheers of the crowd to waft him closer to Williams. GAC Pindar was still in the lead at the final turning mark, but US One again went shoreside and managed to sneak ahead of their opponent just before the finish. 2-0, and the Dutch Match Cup went to Canfield.

In the Petit Final to determine 3rd overall, Mathieu Richard took the first match but David Gilmour bounced back to win the next two and secure his first podium finish at a Tour event. The LunaJets skipper will be kicking himself for some unforced errors earlier in the day, particularly at the finish of match 4 in his Semi Final against Williams. Richard had to offload a penalty at the finish, although he had a huge lead and was not under too much pressure. When the crew went to lower the spinnaker before turning up to begin their 270-degree penalty turn, the sail dropped in the water and started trawling behind the boat like a fishing net. In just 4 knots of wind, the boat’s all-important momentum was lost, the French boat hit the finish mark as they took their penalty around it, and Williams breezed past to secure his spot in the Final.

It was that kind of day – very, very easy to make mistakes or to fall into a hole as you watched your opponent sail on by. Gilmour took an easy win in his first Semi Final match against Canfield and was showing the kind of form that could have yielded overall victory. However in another match Gilmour seemed to have an unassailable lead but allowed too much separation on the final run. So often the chasing boat would take its chances by the shore, and would be frequently rewarded for doing so. You can’t give Canfield too much rope. Give him an inch, and he’ll take a mile, all done with an assassin’s smile.

Canfield’s laid-back demeanour serves him well when the conditions get squirly. “It was never-say-die out there,” said Canfield, “and I have to pay tribute to my crew, Rod Dawson, Mike Rehe and Hayden Goodrick, for keeping at it, however we were doing in the race.” It was a vital win for the reigning World Champions who have a lot of work on to defend their crown against the frighteningly consistent GAC Pindar.

Williams might have lost the battle, but the four-time World Champion is still winning the war. “Of course we’re disappointed not to have won here today, but we’re pleased to have made this the sixth final in a row that we’ve reached on the Tour, stretching back to Monsoon Cup last year. Congratulations to Taylor and US One, they sailed extremely well, and we look forward to the next one.” That ‘next one’ is the Argo Group Gold Cup in Bermuda in three weeks’ time. After the light and responsive Maxfun25s used in Lelystad, the larger and heavier International One Designs present a different kind of challenge.

This was the first time that Holland has been represented on the Tour, and Canfield paid tribute to the organisers and people of Lelystad. “This has been a fantastic event, great people, great racing, and we can’t wait to come back next year.”