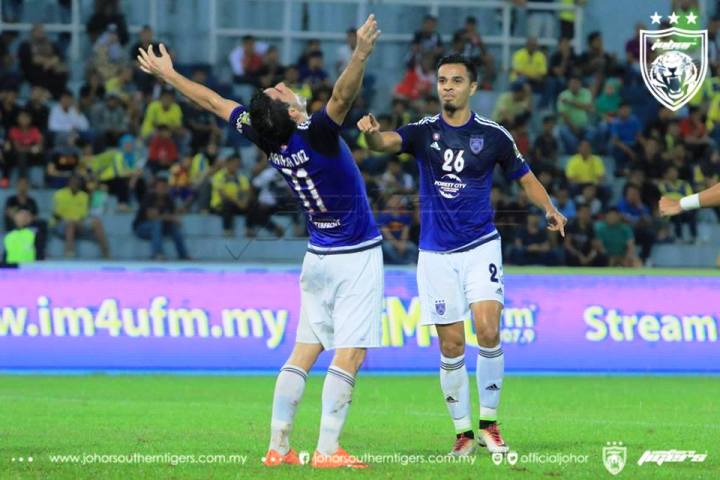 # Penang surprise Felda United with a 2-2 draw in Jengka

# Another Kelantan player red carded in as many matches

# Perak hit for three at home by Sarawak

Felda United slipped and defending champions Johor Darul Takzim (JDT) are the new Super League leaders after running riot against Pahang at the Darul Makmur Stadium in Kuantan on Saturday.

The huge win surprised the Southern Tigers who could only manage a 3-0 win over Pahang in their last first round fixture at the Larkin Stadium in Johor Bahru on Wednesday.

Argentine sharp shooter Jorge Pereyra Diaz was the toast of JDT with a grand hat-trick against the bewildered Elephants who remained in relegation zone with only nine points to show after 12 matches and are second from the bottom in the 12-team league.

Diaz’s clinical finishing saw him get into the score-sheet in the 29th, 56th and 77th minutes while compatriot Juan Martin Lucero hit a brace with goals in the seventh and 48th minute. Another of JDT’s foreigner Marcos Antonio got one in the 34th minute.

While the Southern Tigers roared in Kuantan it was the opposite for previous leaders Felda United at the Tun Abdul Razak Stadium in Jengka – as the Panthers – as Penang are also known – took the fight to Felda.

Felda were ahead after 10 minutes through Syamim Yahya. But it was 1-1 at halftime when Penang earned a penalty and Reinaldo Lobo made no mistake from the spot kick just before the breather.

And Penang took off from there in the second half and were 2-1 up after 66 minutes with Osas Ikpefua on target. Liberian international Francis Forkey Doe came to Felda’s rescue with a 81st minute equaliser to share the spoils.

In a surprise turn of events Selangor hammered a belequered Kelantan 5-2 to give new coach Velizar Popov plenty to swallow in his first home match.

Kelantan went ahead after 11 minutes through Baze IIijoski but the Red Giants came back charging with goals by Hafiz Kamal (17th), R. Gopinathan (23rd), Nazmi Faiz Mansor (38th) and Hazwan Bakri going on a scoring spree after Dramane Traore pulled one back on 60 minutes.

Three minutes later Kelantan were reduced to 10 players after Wan Zahrulnizm Zakaria was given the marching orders. It was the second time in four days that Kelantan had a player sacked.

Sarawak also pulled off a big surprise when the Crocs showed the bite that had been missing in the first round with an impressive 3-0 win over Perak at the Perak Stadium in Ipoh.

A penalty goal by Junior Aparecido in the 31st minute paved the way for Sarawak’s win – only their third in 12 matches. Australian Ndumba Makeche (65th) and Gilmar Filho (70th) competed the scoring for Sarawak.

In Kuala Terengganu, a late penalty gave Terengganu a 2-1 win over T-Team. Joseph Kalang Tie converted the spot kick in the 90th minute after Norshahrul Idlan Talaha gave the Turtles a fourth minute lead. Asrol Ibrahim scored for the Titans in the 64th minute.

Liridon Krasniqi saved Kedah the blushes with a 90th minute goal which earned the Red Eagles a 1-1 draw against Police at the Shah Alam Stadium..

Meanwhile in the only Premier League match played at the Hang Jebat Stadium in the Malacca the homesters regained their place at the top of the league with a 3-1 win over Armed Forces who are still winless after 12 matches.