Home News Champions JDT show their might at Larkin 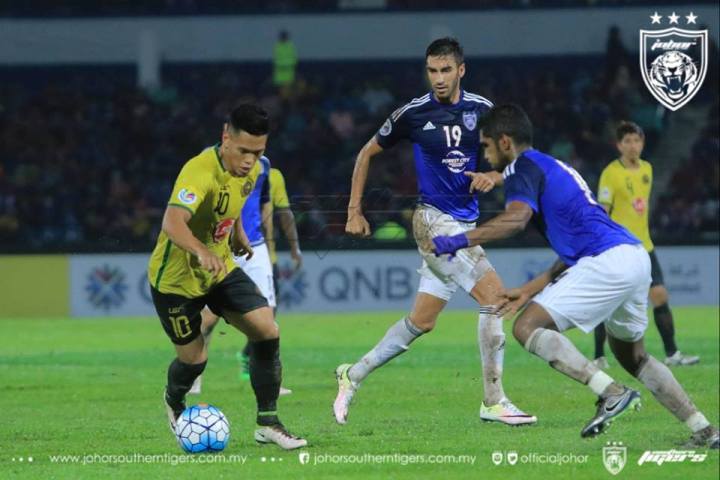 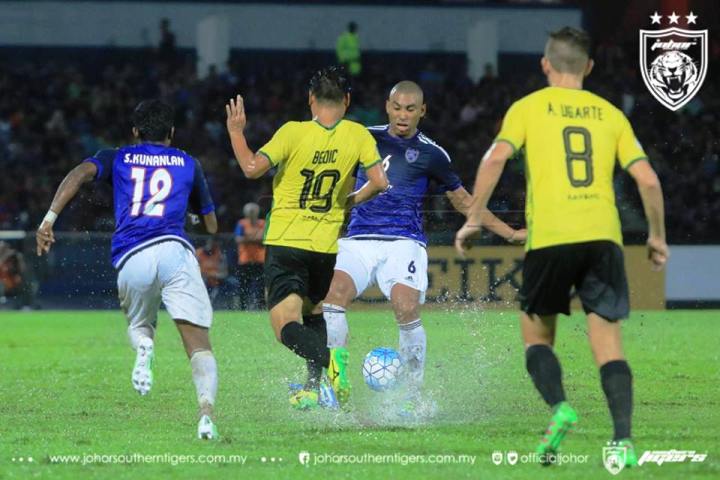 # Soggy pitch is no problem for the Southern Tigers

# Argentine show as Lucero and Diaz show their class

# Azamuddin Akil gets a brace

The heavy rain before the match came as a blessing for the Southern Tigers blasted Kaya FC of the Philippines 7-2 on a soggy Larkin Stadium pitch in Johor Bahru to march into the AFC Cup quarter-finals.

It was masterly display of strong signals that JDT have only grown stronger in their bid to retain the AFC Cup while firing on cylinders in local competitions and have already won the Charity Shield and the FA Cup.

Juan Martin Lucero fired a hat-trick on a cold and chilly night with his first coming off a curling freekick over a five-man Kaya FC wall and it was the beginning of a nightmare for the visitors.

Goalkeeper Matthew Acton had to pick the ball from inside his net for six more times. For Kaya FC skipper Aly Borromeo it was not a night for him. First he gave away the freekick which resulted in JDT’s first goal.

And in the 23rd minute it Borromeo again when he had a say in JDT’s second goal when he fouled Jorge Pereyra Diaz inside the box and the Argentine picked himself up to score from the spot.

Then it was Azamuddin Akil’s show. The Pahang-born international who moved to JDT this season made it count twice in a spate of seven minute.

First in the 33rd minute he put the finishing touches to a Diaz cross from the left and on 40 minute he scored the goal of the night in the match – with a curling righter footer that sailed into the top left corner of the net in a three-man move which began with a long punt by JDT keeper Izham to Diaz.

Kaya FC struck out of the blue in the 53rd minute when Jose Porteria managed to get the ball into the JDT net from an acute angle on the left.

However, a minute later JDT increased their tally to 5-1 when Lucero fired home a stinging shot from a Diaz set up. Substitute Mahali Jasuli, who has earned a national call-up from coach Datuk Ong Kim Swee, headed home Diaz cross before Lucero completed his hat-trick and JDT’s seventh in the 71st minute.

Antonio Ugarte pulled one back for Kaya FC in the 88th minute.

In another Round of 16 match at the Mongkok Stadium in Hong Kong, India’s JSW Bengaluru qualified for their first AFC Cup quarter-final with a 3-2 win over Kitchee FC.