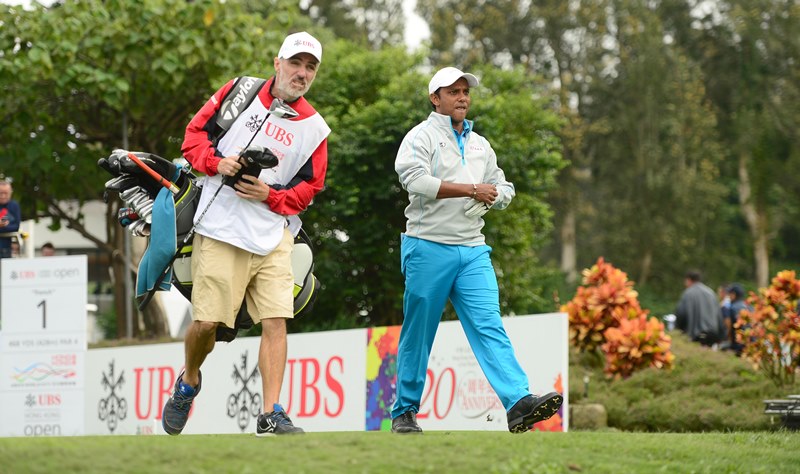 India’s S.S.P. Chawrasia doubled his overnight advantage to two when he carded a second round four-under-par 66 to continue leading the UBS Hong Kong Open on Saturday.

Despite the gusty conditions at the Hong Kong Golf Club, the six-time Asian Tour winner remained unperturbed as he even extended his lead to five at one stage after birdies on holes three, seven, eight, 10 and 13.

His card was marred by a lone bogey on the par-four 14 and with South Africa’s Thomas Aiken returning with the day’s lowest score of 64 to take second place, the Indian’s lead was eventually cut to two.

Thailand’s Poom Saksansin’s two-day total of five-under-par 135 saw him take a share of third place and kept him within sights of Chawrasia as he conquered his nerves to remain in contention for his third Asian Tour victory.

Newly-crowned Asian Tour winner, Micah Lauren Shin of the United States continued his good form by returning with a 69 to be among the front runners in tied-seventh place at the US$2 million event.

Tournament drawcards Justin Rose and Sergio Garcia meanwhile kept the galleries happy as their respective 137 and 140 total was enough to see them progress into the weekend rounds.

It was a great round today.  I was five-under at one time but then three-putted 14. I hit a good tee shot, good second shot to within 10 feet. My first putt went pass the hole by about three feet and I continued to miss from there. But still, it’s a good score. I’m happy. I think the greens are very fast here and a little bit windy, of course.  That’s why I think the players are struggling. I’m just following my game plan.  Same thing, I’m playing last two days, exactly the same strategy. I don’t want to change anything.  I’m feeling more confident today than yesterday.

I still feel very nervous each time I play in big events like this. This is especially so when I first tee off. I just hope to have a good drive each time I tee off. But I’m feeling good because I’ve been driving the ball very well these past two days. My irons and putting have been good. I just made a little mistake on the greens as I found it tough to read them

The win in Manila was a confidence booster.  But I still have to play well here as it’s a different tournament. I still need to work hard and try my best to try to finish well. I’ve been putting really well.  I’m kind of disappointed with how I’m driving the ball right now but hopefully over the weekend, I can hit more fairways so that I can get more birdie chances.

It wasn’t easy out there.  The course is playing I think really firm right now because it’s really tricky.  You miss greens, it’s very hard to get a ball up and down.  The lies around the greens are very awkward. Obviously with the wind gusting, it was hard to hit greens early.  Very hard to judge the ball in between the trees.  I think it was very cold and windy early in my round. Love to have limited a couple of the mistakes, but overall I think it was kind of a fun round.  Disappointed to drop five shots but at least I made six birdies.  It wasn’t easy out there. But I feel like I’m in good position

I played terrible the last two days.  At least I managed to hold it together to make the cut, but I didn’t feel comfortable at all with my swing, and didn’t putt that great.  It’s been a tough couple of days, but hopefully get better on the weekend. Obviously these weather conditions make it a little bit tougher, but you know, I had the idea that the course was going to play fairly difficult, even if the weather would have been with no wind. Mainly because the greens are firm.  They are not that easy to hit it close to the pin.  There’s a lot of tight drives there on the front nine more than anything.  That’s kind of it. Obviously I would love to play a little bit better, more like I played last week.  Hopefully I’ll be able to find it.

Leading Scores after round 2 of the UBS Hong Kong Open Championship 2017 being played at the par 70, 6710 Yards Hong Kong GC course (am – denotes amateur):