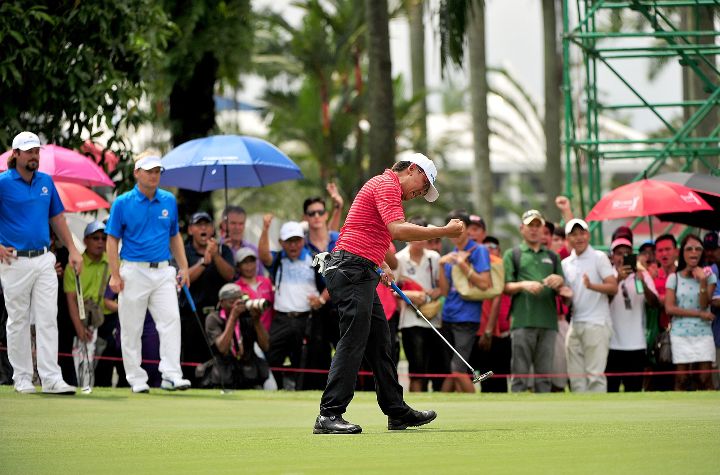 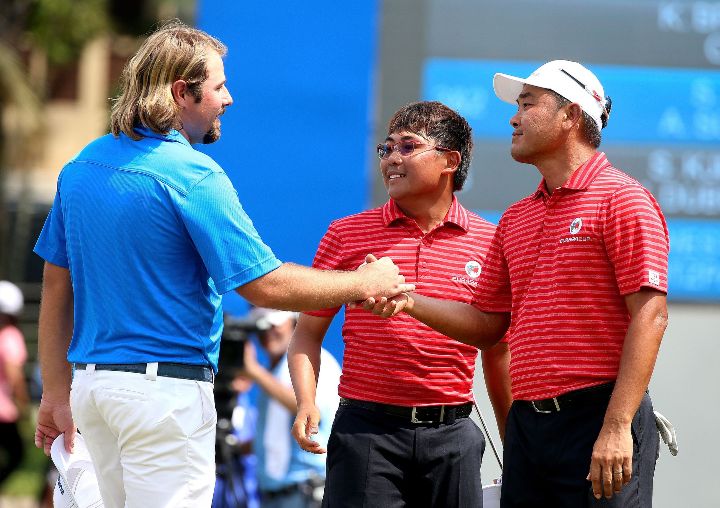 Danny Chia and Nicholas Fung produced yet another gutsy performance for Team Asia to secure their second half point in the foursomes session at the EurAsia Cup presented by DRB-HICOM on Saturday.

The Malaysian duo, facing Victor Dubuisson and Soren Kjeldsen for the second straight day, were two-up at the turn at Glenmarie Golf and Country Club but required a brave six-foot par putt by Fung at the last hole to ensure they remained as the only players undefeated in Team Asia.

The Darren Clarke-led Europe dominated the session by winning four matches while Asia won one match through Kiradech Aphibarnrat and S.S.P. Chawrasia, who beat Kristoffer Broberg and Chris Wood by 2-holes.

Fung and Chia’s match was all square through 15 holes but Fung won the 16th hole with a 10-foot birdie to go 1-up. He missed a short par putt on 17 which led to a dramatic conclusion to day two’s proceedings where Team Europe lead Team Asia 9 to 3.

“Danny and I started good on the front nine. We were 2-up so I told my partner lets just try to to hit more fairways, more greens but then we collapsed. We kept missing fairways after that,” said Fung, who is a captain’s pick.

“We were square until the 15th hole but we managed to get back a birdie on 16. Coming into 17 and 18, I was so nervous. I’m still very happy with our half point, and I holed the putt on the last hole. It’s very important to get a half point at least,” he added.

Chia, a two-time Asian Tour winner, said it was a miss-read on the 17th hole which led to the bogey but heaped praise on his partner for pulling through on the last.  “It (the putt) looked pretty straight to all of us. We said it is right inside and the ball just broke more than right inside, and it’s as simple as that. The whole day, he (Fung) was holing a lot of clutch putts after putts, and it is not anybody to be blamed,” Chia said.

Chia was picked by captain Jeev Milkha Singh to go out in the first singles match against an in-form Ian Poulter while Fung will face Lee Westwood, a former world number one. The European pair have won their two matches thus far.

“I didn’t hit it great and they still can’t beat me,” said Chia. “I just have to hit it decent and I’ll have a fighting chance. It doesn’t matter who it is that I’m playing tomorrow.”

Reigning Asian Tour number one Anirban Lahiri of India praised the Malaysian duo for their fighting spirits and rallied his teammates to emulate their never-say-never attitude.

“Looking at the way Danny and Nicholas have played, they have played with their hearts on their sleeve. They have given it everything and I think that is what is needed. I think we need to go out there and give it absolutely everything. We have to play our best golf. We have to forget about who we are playing against, because at the end of the day, it’s still golf.

“As a team, we haven’t made enough birdies this week, and tomorrow, all of us are going to go out there and just be aggressive. I think that’s what Captain Jeev has told us. He believes in us, and he just wants us to go out there and show everyone our spirit, our character and just go for everything,” said Lahiri.