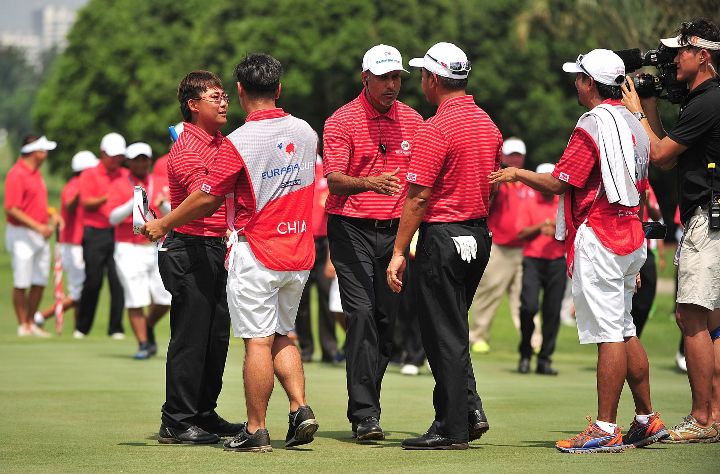 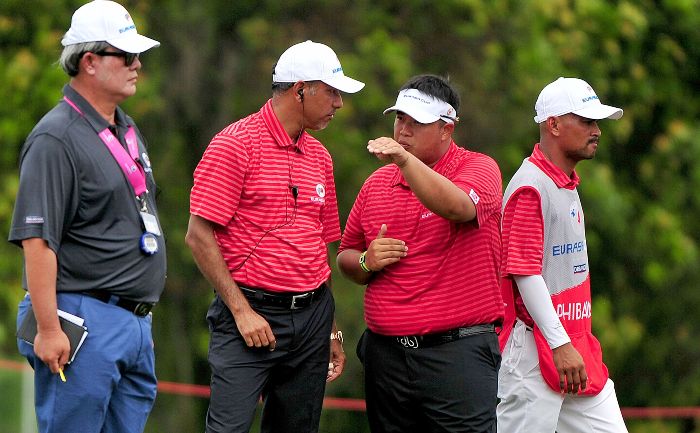 Team Asia Captain Jeev Milkha Singh has rallied his men to re-live the spirit of ’14 as they go into Sunday’s singles session of the EurAsia Cup presented by DRB-HICOM trailing Team Europe by six points.

With 12 points at stake on the final day, Europe only require 3 ½ points to become the first winner of the EurAsia Cup after the inaugural edition ended in a memorable 10-10 draw following a fightback from Asia who trailed by four points going into the singles.

Singh said: “Looking back two years ago, we were in a similar situation and the boys pulled through. And I still believe with the pairings that have come out, my boys are going to do well tomorrow.

“I think in golf, I believe in the saying, anything is possible until the last putt is not holed out. So I’m hoping and I believe that my boys are going to go out there and give it their best shot. I just told them, and I’m going to repeat myself … you know, when your back is against the wall, the only way is up, or you’ve just got to push yourself. So I think that’s what they are going to do. I think there’s no other option.

“And they said, ‘yes, we are going to give our best’ and I believe them. They want to go out there and they want to give their best shot possible.”

With an uphill task, Singh, as expected, loaded his singles line-up with players who have shown form at the EurAsia Cup and Malaysian golf fans will be in for a treat with local number one Danny Chia, who is undefeated in two matches, playing the first singles match against Europe’s talisman Ian Poulter.

The second Malaysian, Nicholas Fung, will square off against former world number one Lee Westwood in match seven. Byeonghun An and Thongchai Jaidee, who have one win from two matches each, and Kiradech will feature in the second, third and fourth matches against Danny Willet, Andy Sullivan and Matthew Fitzpatrick respectively while newly installed Asian Tour number one Anirban Lahiri, who has lost two matches here, will face Shane Lowry in the fifth match.

Singh is determined to prevent Europe from grabbing the early points needed to win the EurAsia Cup on Sunday.

“I sent Danny Chia out first. I think he’s really playing well, and in front of the home crowds, he’s handled himself well. He would be fantastic to go out, because I think the Malaysians are going to cheer him on. I want to get some momentum going for my team,” said Singh.

“And after that, I have loaded the team off with the top players. In the end, I’ve loaded with some experienced players if it comes down to the wire, and I have a feeling these boys are going to push themselves to the limit.

Singh was full of praise of Chia and Fung again, as the latter needed to hole a pressure-packed six footer for par at the last hole to ensure a half with Victor Dubuisson and Soren Kjeldsen, whom they also halved their fourball match with on Friday.

“Danny and Nicholas, amazing. I think it’s great to watch these two. I think when I asked them early, I said, “What do you think about playing with each other?” They said, “We’re brothers.” I said, “This is it. You’re made for each other,” and I think they have proven it,” said Singh.

“I think the way they handled themselves was fantastic, especially Nicholas holing the last hole, six-footer, to get half a point for Team Asia, I think that was fantastic to watch.”

Singh, a former two-time Asian Tour number one, is hoping his men will have better joy on the greens on Sunday. “I think the Asian players, my team, where the boys have lacked is putting. I think they have hit the ball really well. I’ve been watching them and they have missed a lot of putts. I think to get the momentum going, you have to hold putts in match-play situations,” said Singh.

“When you start missing a few early on, it kind of gets a player down, but I’ve been telling them, ‘I said, you’ve got to keep your spirits up. You’ve got to keep going, because it’s a new hole. Like when Nicholas missed the putt on 17, I just told him, it’s a new hole, 18. You don’t need to putt your chin down. Just keep your chin up and you just go out there and do a good job.”