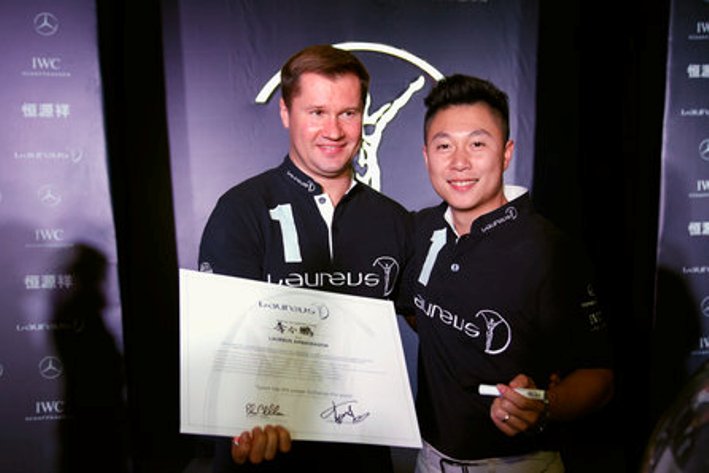 One of the world’s greatest gymnasts Li Xiaopeng has been named the newest Ambassador for the Laureus Sport for Good Foundation. He said: “This is a great honour. I would like to thank the Laureus Academy for putting their faith in me.”

Li Xiaopeng, who won four Olympic gold medals and eight World Championships, was inducted into the Laureus Family by fellow gymnast and Laureus World Sports Academy Member Alexey Nemov, during a visit to interact with Special Olympics athletes in the Pudong Special Education School in Shanghai.

Special Olympics is the world’s largest sports organisation for children and adults with intellectual disabilities and is supported by the Laureus Sport for Good Foundation.

Later in the day Li Xiaopeng opened a unique photo exhibiton at the Oriental Pearl Tower on the riverfront in Shanghai, sponsored by HengYuanXiang Group (HYX), the official Host Partner of the 2015 Laureus World Sports Awards in Shanghai.

Li Xiaopeng said: “To become a Laureus Ambassador and to take part in two such special events in my own country has made this an unforgettable day. Our visit to the school was really emotional and I’m sure it meant a lot to the children that we were able to go and meet them. It certainly meant a lot to me. This is so exciting and so rewarding for me to see Laureus committed to a wonderful project like this in my own country. I was so happy to be there and meet the children and the staff. I look forward to supporting many more projects like this in the future.”

Alexey Nemov, who won 12 Olympic medals in his career, said: “I most warmly welcome Li Xiaopeng as an Ambassador, especially because he is from my own sport. I can tell everyone that he is one of the greatest who ever competed. Our social work in China is only just beginning and I know that he will play a massively important part in expanding that throughout the country.

“We want to be able to carry the message of our first Patron, Nelson Mandela, to this great country that sport has the power to change the world. We will be holding the Laureus World Sports Awards in Shanghai next year, but I hope this visit to Pudong shows that the work we do to improve the lives of young children goes on around the year, not just at the Awards Ceremony.”

During their visit to the school, Li Xiaopeng and Alexey Nemov took part in classroom lessons and shared games time with the pupils. Under the slogan of the 12th Special Olympics Shanghai World Games ‘I know I can’, the school carries forward the spirit of Special Olympics and runs a wide variety of sports including gymnastics, basketball, football, table tennis, golf, bowling and hockey, with the support of the Laureus Sport for Good Foundation.

Gymnastics is one of the Special Olympics sports in which the school specialises. The school formed its first gymnastics team in 2003 and since then it has won numerous awards. In 2011, the team participated in the 13th World Special Olympics in Athens and won 25 gold, six silver and two bronze medals.

The Laureus photo exhibition, which will be held at the Oriental Pearl Tower from October 17-21, consists of four elements: the history of Laureus; the Laureus Sports for Good Foundation; flashbacks of the 15 years of the Laureus World Sports Awards, capturing the glamour and excitement; and the story of Laureus in China.

HYX Group General Manager Mr Chen Zhongwei said: “HYX has consistently shown enthusiasm and experience in successfully sponsoring sports events, so that the co-operation with Laureus, we believe, will be a valuable partnership – what we call harmony in China. This splendid exhibition, which informs people about Laureus, is also a wonderful collection of photographic art and is the perfect start to the build-up to next year’s Laureus World Sports Awards. We are delighted that Li Xiaopeng was able to open this exhibition and we congratulate him on his commitment to Laureus as an Ambassador.”

The Laureus Sport for Good Foundation addresses social challenges through a worldwide programme of sports related community development initiatives. Since its inception, Laureus has raised over €60 million for projects which have helped to improve the lives of millions of young people. The mission of the Laureus Foundation is to use sport as the means to combat some of the world’s toughest social problems facing young people today such as juvenile crime, gangs, HIV/AIDS, discrimination, social exclusion, landmines awareness and health problems like obesity. Laureus currently supports more than 150 sports-based projects in 34 countries.

In 2008, after suffering from a serious toe injury, he came back to record the most emotional successes of his career, in front of his own supporters at the Beijing Olympics, where he won gold medals for parallel bars and in the team event. These were his 15th and 16th world titles – made up of four Olympic gold medals, eight World Championship titles and four World Cups – and meant he had overtaken his idol, Chinese gymnastic legend Li Ning, who won 14 world titles.