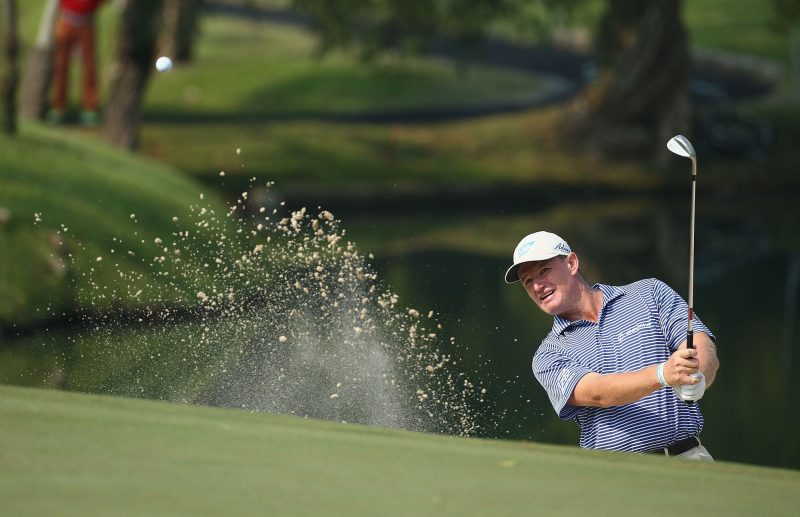 Ernie Els of South Africa added the icing on his 45th birthday cake by grabbing the halfway stage lead in the US$1.3 million Hong Kong Open on Friday.

Overnight leader Jyoti Randhawa of India, who opened with a 64, struggled to a 70 to share fifth place alongside 10 other players which included Angelo Que of the Philippines, Lu Wei-chih of Chinese Taipei and Marcus Both of Australia.

Meanwhile Prom Meesawat of Thailand, runner-up here last year, aced the second hole with a nine iron en-route to a 66 for tied 35th position in the event sanctioned by the Asian Tour and European Tour.

Els enjoyed a hot start when he birdied four in five holes starting from the 13th hole before adding two more birdies after the turn. His only blemish was on hole four where a lapse in concentration resulted in him hitting his tee shot into the trees before finding the bunker with his second attempt.

“The course is there for the taking. When I’m on, I’m playing nicely. I lost my concentration a little bit after the fourth hole. I’d like to improve on that. But I feel really good about my ball striking and I’m putting nicely too,” said Els, who totalled nine-under-par 131.

“The fourth hole was a bit of a bummer but, you know, I feel like my game’s right there.  I love the golf course and I love the old style conditional golf that we play here, and the greens are great.  So if I’m on tomorrow, you know, we’ll try and shoot something low.”

Els, an Honorary Member and International Ambassador of the Asian Tour, will only allow himself a quiet birthday celebration as he takes aim at winning the Hong Kong Open in his first appearance in the country since playing in the 1996 Alfred Dunhill Masters.

“Yeah I’ll celebrate but without any alcohol, you know, I’ll have a bit of cake and go back to the hotel, have a shower, relax and see what we do for dinner tonight,” smiled Els, who is nicknamed the ‘Big Easy’.

The big-hitting Hend, who won three Asian Tour titles last year, was rewarded for his patience on the course with a bogey free round highlighted by two birdies in each half.

“It’s one of those golf courses where you can’t overpower the golf course.  You just have to take your ticket and wait for your number to come around before you make a birdie and that’s how you have to look at it,” said Hend.

“It’s a good start to the week. It will be cool to try to chase down Ernie over the weekend and hopefully hole a few more putts, and who knows? I haven’t been playing very well of late so I am trying to change that around. I have been working hard on it and there are some promising signs,” he added.

Filipino Que bogeyed the last hole but he is still within sight of Els. Currently ranked 40th on the Order of Merit, Que needs a huge result this week to secure an Asian Tour card for 2015.

“I really wanted to play with Ernie, but maybe on the last day.  I’ve just got to keep my composure and be relaxed and just keep doing what I’m doing. My goal this week was just to finish in the top-10 actually, because I’m just trying to keep my card this year.

“We are getting towards the end of the year.  I just want to have a spot next year, have a spot on the Asian Tour. My target, my expectations are actually pretty low.  Not trying to set it so high that I won’t be disappointed. Don’t want to stress out too much,” said Que, who placed tied fifth here last year.

The halfway cut was set at one-under-par 139 with a total of 66 players making the weekend rounds. However, Miguel Angel Jimenez of Spain will not be one of them as he struggled with a stomach bug to return with a 70 for a 142 total.

“These two days, I walk the golf course like a phantom.  I’m trying hard, make some birdies but also make too many bogeys. My condition is not 100 per cent. Of course I will come back next year.  I love this place. I love Hong Kong. I love the golf course,” said Jimenez, a four-time Hong Kong open champion.

Scores after round 2 of the Hong Kong Open Championship 2014 being played at the par 70, 6699 Yards Hong Kong GC course (a- denotes amateur):