Home News Others Classic Rally in the Bergisches Land 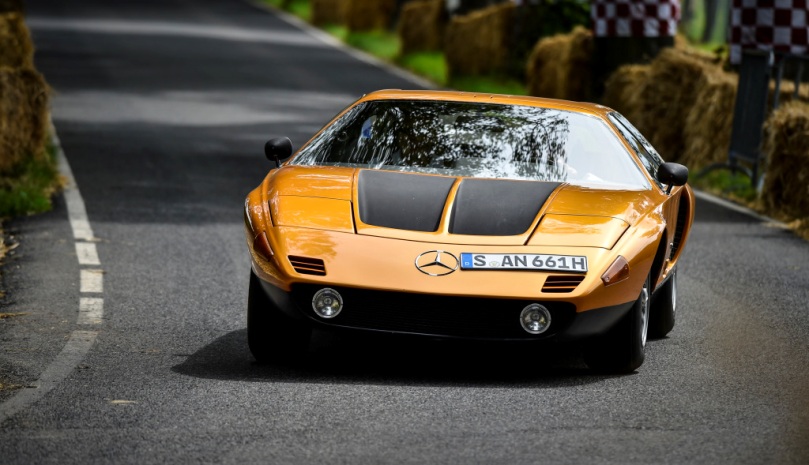 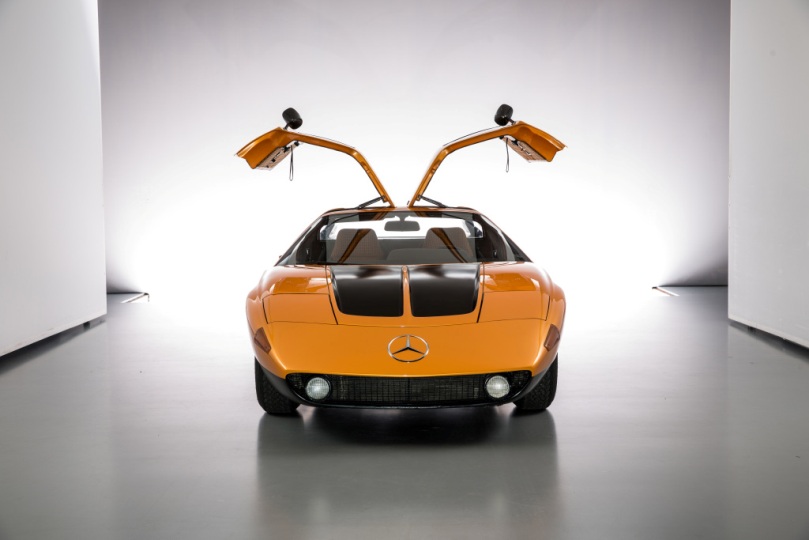 Mercedes-Benz Classic is entering two legendary sports cars in the Schloss Bensberg Supersports Classics (SBSC): the Mercedes-Benz 300 SL Roadster (W 198) celebrated its premiere in 1957, whilst the experimental vehicle C 111 dates back to 1970. As part of the rally for classic sports cars and young classics up to 1997 the SBSC will also be presenting current super sports cars this year.
Mercedes-AMG, the Mercedes-Benz performance brand founded 50 ago as an engineering office, is present here with two models from the Mercedes-AMG GT model series family (fuel consumption combined: 11.4 -9.3 l/100 km CO2 emissions, combined 259-216 g/km*).

This year the Schloss Bensberg Supersports Classics (SBSC) rally is offering lively dialogue between historic and modern super sports models. For both at the classic rally through the Bergisches Land region on Saturday, 1 July 2017 and at the Concours d’Elégance on 2 July current super sports cars are joining the impressive parade of classic cars and young classics.

The vehicles are driven and presented by personalities such as the racing drivers and Mercedes-Benz Brand Ambassadors Klaus Ludwig and Jan Seyffarth.

Founded in 2009, the Schloss Bensberg Supersport Classics is being held around the Baroque hunting lodge in the Bensberg area of the town of Bergisch Gladbach. Today the 18th century palace houses the Althoff Grandhotel. The hotel, together with the specialist media “Auto Zeitung” and “Classic Cars”, organises the SBSC. The event starts with a welcome for the participating vehicles on the Friday evening (30 June).

On the Saturday (1 July) the rally starts at 9 a.m. In total around 260 kilometres are covered in the Bergisches Land in this challenging regularity race. Along the route the participants can expect five checkpoint controls with presentations of the vehicles to the public in Wermelskirchen, Lindlar, Ehreshoven, Bergisch Gladbach and Blankenberg. There are also twelve allocated time stages on the rally schedule. The vehicles are expected back in the palace courtyard at around 4.30 p.m.. The modern super sports cars head the rally in front of the peleton of classic cars and young classics. Entry to all the day´s activities is free.

On the Sunday (2 July) all the vehicles participating in the rally will be presented at the Concours d’Elégance. A special presentation is devoted to the current super sports cars. Individual entry to the exclusive festival of automotive sportiness costs 8 euros (including programme booklet) and the price for families is 12 euros (maximum 2 adults and 2 children, including 1 programme booklet). Children under 14 are admitted free of charge.

Honoured with the title of “King Ludwig” by his fans, the outstanding racing driver and three-times DTM Champion Klaus Ludwig began his motor racing career in the early 1970s with slalom races, orientation rallies and touring car races. His first major successes included the German Motor Racing Championship (DRM) title in 1979 and 1981, and victories in the 24-hour race at Le Mans in 1979, 1984 and 1985. Ludwig came to the German Touring Car Championship (DTM) in 1985, where he initially competed for Ford and won his first title in 1988. In 1989 he moved to the AMG-Mercedes team, with which he won two championship titles (1992 and 1994, runner-up in 1991) and a total of 19 race victories in the years up to 1994. In 1995 and 1996 he competed in the ITC (International Touring Car Championship) for Opel Team Rosberg. He subsequently returned to AMG-Mercedes, winning the driver and team trophy in the International FIA GT Championship together with Ricardo Zonta in 1998. He subsequently officially retired from motor sport, but competed once again in the new German Touring Car Masters (DTM) in 2000, ending the season and his motor racing career with a third-place finish in the overall rating in a Mercedes-Benz CLK-DTM.

The racing driver Jan Seyffarth is an official Mercedes-AMG test and development driver and an instructor at the AMG Driving Academy. Since 2015 Seyffarth has been involved in developing the Mercedes-AMG GT3, which celebrated its customer sports premiere in the same year. The racing driver brings the requisite experience through numerous successes in motorsport: back in 2003, at the age of 17, he entered the world of professional motorsport after taking 2nd place in Formula König. This was followed by wins in Formula 3 and the Vice Championship in the Porsche Carrera Cup in 2008. Since Mercedes-AMG entered customer sports in 2011 Seyffarth has been committed to this exciting world. His major successes include two 3rd places in the 24 Hours race on the Nürburgring (2013 and 2016), a victory in the VLN Nürburgring long-distance championship (2013) and 2nd place in qualifying for the 24 Hours race on the Nürburgring in 2016. 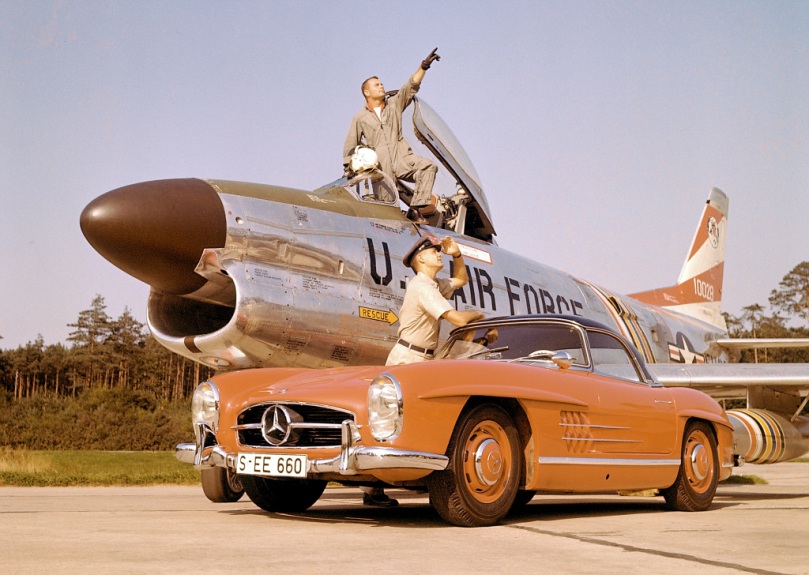 At the Geneva Motor Show In March 1957 Mercedes-Benz unveiled the 300 SL Roadster (W 198) as the successor to the 300 SL (W 198) “Gullwing” Coupé unveiled in 1954. On a technical level, the open-top sports car was very like the Coupé, although the modified space frame allowed the installation of conventionally attached doors, which were necessary for open-top driving. The suspension was likewise modified: the single-joint swing axle with lowered pivot point on the 300 SL Roadster was equipped with a compensating spring for the first time. From 1958 onwards the roadster was also available with a detachable coupé roof on request. It was from the standard-production 300 SL Roadster that the Mercedes-Benz engineers developed the 300 SLS racing variant with which Paul O’Shea won Category D of the American Sports Car Championship in 1957. So we´ve come full circle, as the model series 198 of the 300 SL is based on the W 194 racing car of the same name which was used very successfully in motorsport in 1952. Production of the 300 SL Roadster was discontinued in 1963 after seven years, during which time only 1858 units of the highly exclusive sports car were built.

Mercedes-Benz presented the C 111 at the Frankfurt Motor Show (IAA) in September 1969. With its extreme wedge shape and gullwing doors, the research vehicle had a glass-fibre-reinforced plastic body and was powered by a three-rotor Wankel engine with an output of 206 kW (280 hp). This futuristic sports car could reach a speed of up to 270 km/h. The following year, the revised C 111-II version was shown at the Geneva Motor Show – except now with a four-rotor Wankel engine delivering 257 kW (350 hp). This version could accelerate from 0 to 100 km/h in 4.9 seconds and reach a top speed of 300 km/h. It was this second version of the research vehicle that served as the basis for a V8 variant of the C 111 containing the M 116 production engine with 147 kW (200 hp). Mercedes-Benz engineers and technicians used the car for the purposes of comparison with the rotary-engined sports car. Despite numerous orders, the C 111 remained a purely experimental vehicle and never entered production. Mercedes-Benz instead went on to develop a series of record-breaking vehicles based upon it: the C 111-II D (1976) and the C 111-III (1977–1978, both with a five-cylinder turbodiesel engine) and the C 111-IV (1979, V8 petrol engine with turbocharging).