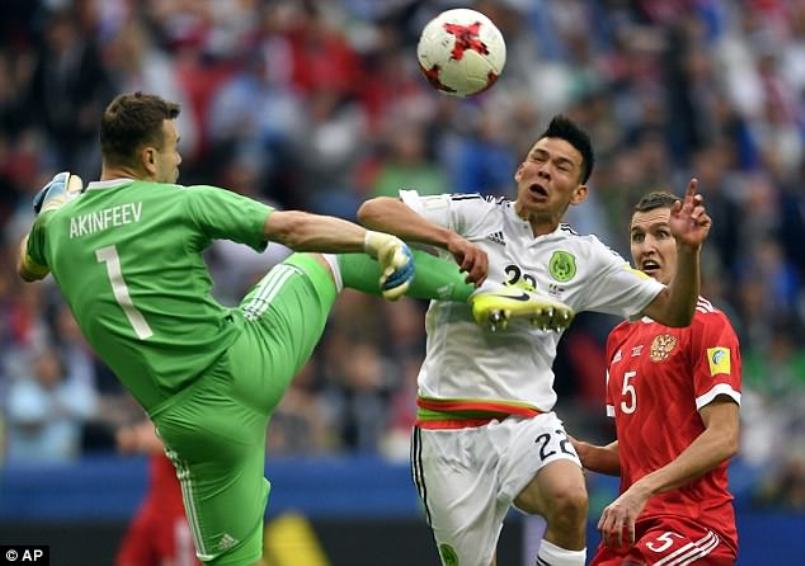 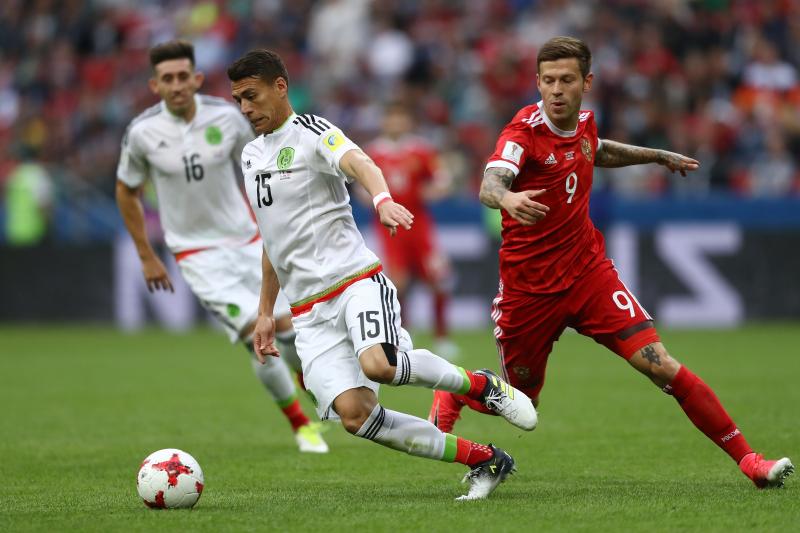 Hosts Russia took a deserved 25th-minute lead in Kazan through Aleksandr Samedov, but Nestor Araujo equalised for Mexico with a looping header on the half hour.

New PSV Eindhoven signing Lozano then headed Mexico into the last four as he beat Russia goalkeeper Igor Akinfeev to Hector Herrera’s towering kick from inside his own half on 52 minutes.

Russia’s hopes of a comeback were further hampered in the final 20 minutes when Yury Zhirkov was sent off for a second yellow card.

“We knew it was going to be tough, we played well against them,” said Mexico coach Juan Carlos Osorio.

“We are building a team which has the skills and determintion to play against any team. We could have scored more goals if we had moved the ball around better.”

While the hosts bow out, Mexico progress as Group A runners-up to play the winners of Group B in Sochi next Thursday.

“It was an interesting match for sure, we knew we had to win and did everything to tip the game in our favour,” said Cherchesov.

“Unfortunately, we didn’t react to their goals and then had a man sent off, even then we tried to score. My team did the best they could.”

Having made eight alterations for the team which beat New Zealand, Osorio again rang the changes against Russia with only defender Araujo and forward Giovani dos Santos retained in the starting line-up.

Just as they did in the 2-2 draw with Portugal and subsequent victory over New Zealand, Mexico made a slow start and again fell behind.

Mexico captain Andres Guardado picked up an early booking that will rule him out of the semi-final, while the video assistant referee was summoned to reject Russian penalty claims after Fyodor Smolov went to ground in the area.

Russia went ahead though as Smolov hit the post, with Aleksandr Erokhin knocking the rebound to Samedov who drilled past Mexico goalkeeper Guillermo Ochoa.

But the goal sparked Mexico into life and they were level just five minutes later.

Porto midfielder Herrera fired in a deep cross to the far post where Araujo lifted the ball over Akinfeev and into the opposite corner.

Mexico lost Diego Reyes to injury just before the break when the Espanyol defender rolled his ankle making an innocuous pass.

The linesman’s flag denied Spartak Moscow’s Samedow after he put the ball in the net early in the second half, and Mexico forged ahead as Lozano’s brave gamble paid off.

Herrara’s thumping clearance was allowed to bounce just outside the Russian area, with Lozano clattered by Akinfeev as he nipped in front of the keeper to head into an unguarded net on 52 minutes.

Mexico then had another goal ruled out for offside following more consultation with the video referee, and Russia suffered a further blow when Zhirkov was dismissed on 68 minutes.

Substitute Igor Smolnikov blazed over from close range with quarter of an hour remaining to compound Russia’s misery. – Agence France-Presse