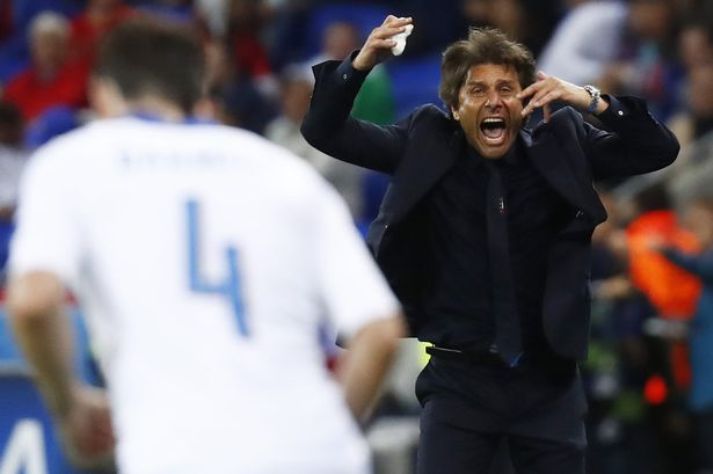 A “great” Italian feat toppled Spain at Euro 2016, but Antonio Conte’s touchline theatrics were just as dramatic for Italian fans during an emphatic 2-0 win over the defending champions.

Former Juventus coach Conte was widely applauded on Tuesday for transforming a “mediocre” squad of players into contenders for this summer’s European Championship in France.

But as Italy’s fans hailed a brilliant collective performance that avenged their 4-0 hammering to Spain in the 2012 final, Conte’s energetic, and sometimes hilarious touchline antics had Chelsea fans champing at the bit.

As Spain coach Vicente del Bosque sat on the bench patiently waiting for a reaction to Giorgio Chiellini’s 33rd-minute opener, Conte was constantly on his feet, screaming at players and officials and gesticulating wildly at almost every kick of the ball.

When a UEFA official was slow to respond to Conte’s request to help him make a substitution in the second half, the Italian unashamedly screamed at him: “Faster! Faster!”

Conte’s emotions ran over in hilarious fashion in the 75th minute when an angry reaction saw him take a dramatic swipe at the ball and kicking it into touch.

And when Graziano Pelle hit Italy’s second goal to seal their win at the death, Conte’s epic celebration saw him sprint to jump on to the roof of the dugout to salute fans.

It was later jokingly suggested he had covered as much ground as his players on their way to ending Spain’s hopes of a historic third consecutive trophy.

Conte admitted: “Our fitness coach did suggest hooking me up to GPS to see how many kilometres I cover, and at what intensity.”

It is no wonder, after Chelsea finished the Premier League season in 10th place to miss out on Europe, Blues fans can’t wait for his arrival.

“Don’t think I’ve been this excited to see a manager at Chelsea in a long time!!!” said Twitter user TweetChelseaFC.

Conte may no longer have the legs that helped Juve to the Champions League crown and five Serie A titles during a 12-year playing spell that forged his reputation as one of the Turin giants’ most tenacious and hard-working captains.

But as a coach, the 46-year-old has energy to spare, and his trademark tenacity is intact.

After his distinguished playing career, Conte took over as coach of Juventus in 2011 and led them to three consecutive Serie A crowns.

Despite lingering doubts over his appointment after Italy suffered their second successive first-round exit from the World Cup two years ago in Brazil, Conte has been quick to silence his detractors.

Italy had not beaten Spain at a major finals since their 2-1 quarter-final win over ‘La Roja’ at the 1994 World Cup, when the Azzurri were beaten on penalty kicks by Brazil in the final.

Having admitted Italy no longer boast world-class players, Conte struck a defiant psychological blow in the lead-up to the match against Spain.

“If Spain want to stop us from going through, they’re going to have to work hard. We won’t be sacrificial lambs for anybody,” said Conte.

After an epic last 16 clash that ended Spain’s long reign as the European champions, even Del Bosque tipped his hat.

“We didn’t score and for sure Italy played better,” said the Spain coach.

Conte now faces the “titanic” task of beating Germany in Bordeaux for a place in the semis.

But fans, of Italy and Chelsea, would endorse his philosophy.

“Since I took over, right from the start I said the only way we could achieve a semblance of success is to try and be a like a club team,” said Conte.

“There is no point in hiding it, this is not the rosiest period for Italy in terms of talent.

“Given the fact we can’t fall back on a selection of good players we have to be a collective.” – Agence France-Presse