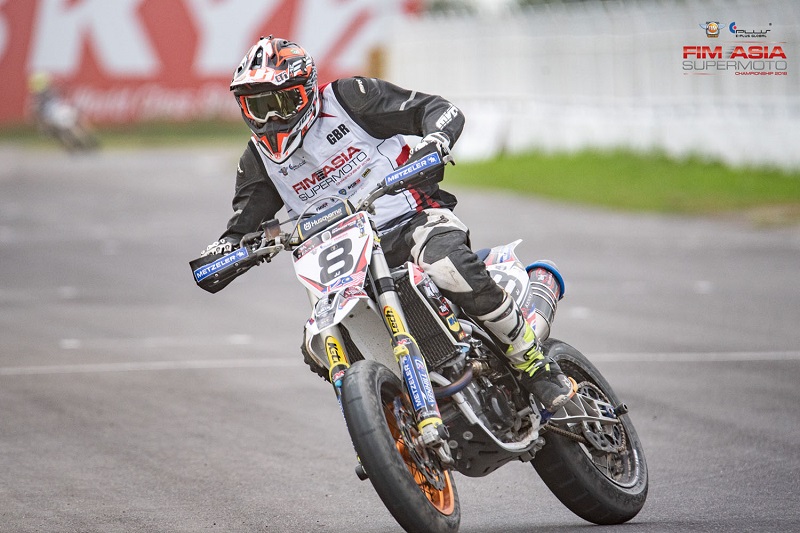 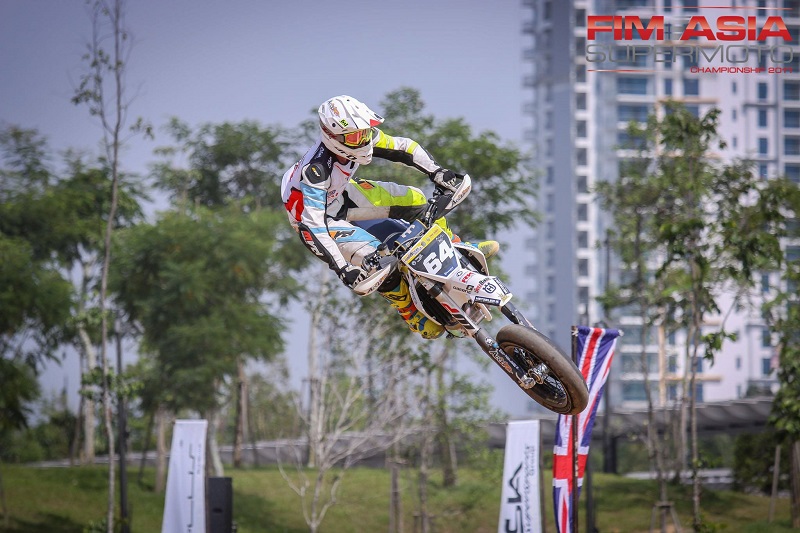 Day two of the second round of the FIM Asia SuperMoto Championship 2018 commenced with a packed schedule of activities.

Taking place at the iconic Philippine landmark of the Quirino Grandstand in Manila, the day’s proceedings kicked off with the third of the free-practice sessions followed by the official timed practice ahead of qualifying. Rounding off the day’s action was the SuperChrono shootout session for the top six riders from the qualifying session.

Carrying the momentum of his double win in Thailand, it was Denmark’s Simon Vilhelmsen who took top spot in the afternoon’s 20-minute qualifying session following a hard-fought battle.

Topping the timesheets with a 41.068s, the Dane was able to fend off the charge from Malaysia’s Mohammad Khairi Zakaria who managed a strong session to clock in a time of 41.409s just four-tenths off of Vilhelmsen’s time.

Coming in with the third fastest time was Muhd Habibullah or Gabit as he is more popularly known, with his time of 41.487s.

Also progressing into the SuperChrono session was local ace Kenneth San Andres after his strong qualifying performance, finishing the session in P4 ahead of championship contender, Lewis Cornish from the United Kingdom qualifying fifth fastest. Also booking his berth into the top-six shootout was Malaysian youngster, Ahmad Danial Haiqal who managed a solid time of 41.991s.

After an action-packed qualifying session, the top six riders still had it all to do as they battled it out once more in the 20-minute SuperChrono shootout, vital in determining their starting grid positions for Sunday’s Moto1 race.

Utilising a different strategy from the previous session, it was Cornish who claimed the pole position start with a scorching lap time of 40.055s, narrowly beating out Vilhelmsen by one-hundredth of a second.

Scoring another front row start for Sunday’s Moto1 race was Gabit, after he too went under the 41second mark with a time of 40.956s. The second row of the grid will be headed by Mohammad Khairi in P4 ahead of San Andres in P5 and Ahmad Daniel in P6.

Commenting on his maiden pole position start of the season for Sunday’s Moto1 race, Cornish notes, “I was really happy with the qualification. It was a close fight between Simon and me just like in Bangkok at the last round with less than 0.1 second separating us. The qualifying lap was maybe not the hardest but it was the smartest. My aim was to not make any mistakes by being perfect with my line choice and staying reserved and going full gas when I can!”

The Moto1 and Moto2 races will take place on the third and final day of action on today. Both races will be streamed live through its OTT channel partners, twenty3.tv and twowheels.tv