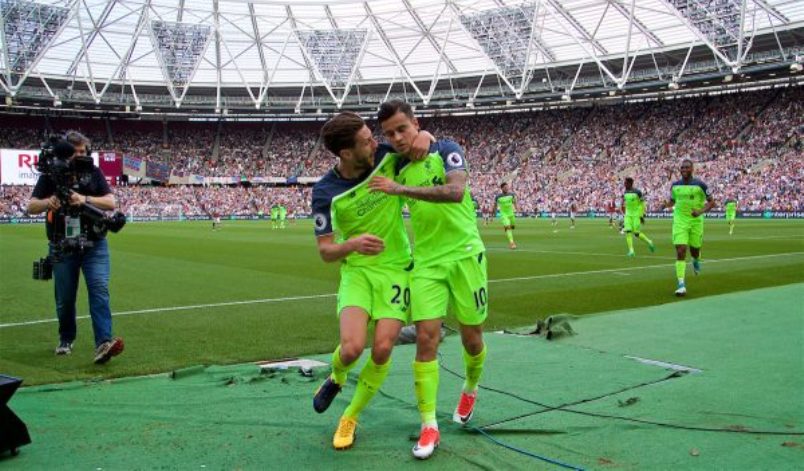 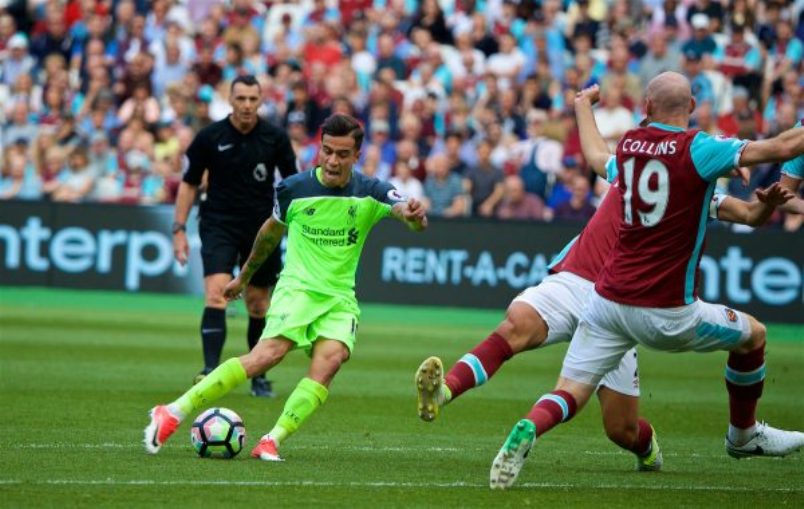 Philippe Coutinho fired Liverpool within touching distance of the Champions League as the Brazilian’s masterclass inspired a 4-0 demolition of West Ham on Sunday.

Jurgen Klopp’s side took the lead when Coutinho’s sublime pass was converted by Daniel Sturridge in the first half at the London Stadium.

Coutinho stole the spotlight again in the second half with a superb solo strike and a cool finish to put Liverpool three goals ahead before Divock Origi netted to cap the Reds’ swaggering display.

Liverpool moved back one point above Manchester City into third place in the Premier League.

Although City and fifth placed Arsenal both have a game in hand, Klopp’s men will be guaranteed a Champions League berth if they beat relegated Middlesbrough at Anfield next Sunday.

In the unlikely event Arsenal lose at home to relegated Sunderland on Tuesday then Liverpool will clinch a top four spot without playing.

It might have been different if West Ham had capitalised on two early chances.

Sam Byram fired inches past the post before Edimilson Fernandes forced Liverpool goalkeeper Simon Mignolet into a smart save.

Sandwiched in between was Liverpool’s first chance of the afternoon after 11 minutes.

Coutinho’s corner was met by Joel Matip whose header bounced down and off the crossbar as West Ham somehow scrambled the ball clear.

Liverpool began to find some momentum and Sturridge freed Adam Lallana, who shot straight at Adrian.

The Hammers goalkeeper also had to be alert to keep out James Milner’s low drive before watching Coutinho’s long-range effort drift just over the top of his crossbar.

Milner dragged his shot wide when well placed but the breakthrough arrived via Sturridge in the 35th minute.

Coutinho split open the West Ham defence with a majestic long pass and Sturridge strode through, rounded Adrian and slotted home his first goal since January 2.

West Ham manager Slaven Bilic has made no secret that Sturridge is on his transfer wish-list.

For now, Sturridge was focused on sending Liverpool closer to the top-four but their lead should have evaporated moments before half-time.

Manuel Lanzini’s corner found its way to Andre Ayew but the striker hit the post from two-yards out before incredibly repeating the trick from the rebound.

That could have changed the course of the match but instead, Liverpool took full control.

Adrian foiled them on three occasions in quick succession.

Origi’s low shot was pushed out before Lallana’s drive was blocked by the Spaniard’s feet.

When West Ham failed to clear, Emre Can freed Georginio Wijnaldum and Adrian again came to the home side’s rescue at his near post.

The crossbar was still shaking from Wijnaldum’s fierce volley when Coutinho gave Liverpool breathing space in the 57th minute.

It was game over when Coutinho struck again five minutes later on the counter-attack.

West Ham were angered that Matip escaped with an elbow on Winston Reid but Liverpool broke and Coutinho danced past Collins easily before netting.

There was still time for Origi to stab home from close-range in the 76th minute following Wijnaldum’s miscued shot. – Agence France-Presse