Home News Curry helps get Warriors back on track 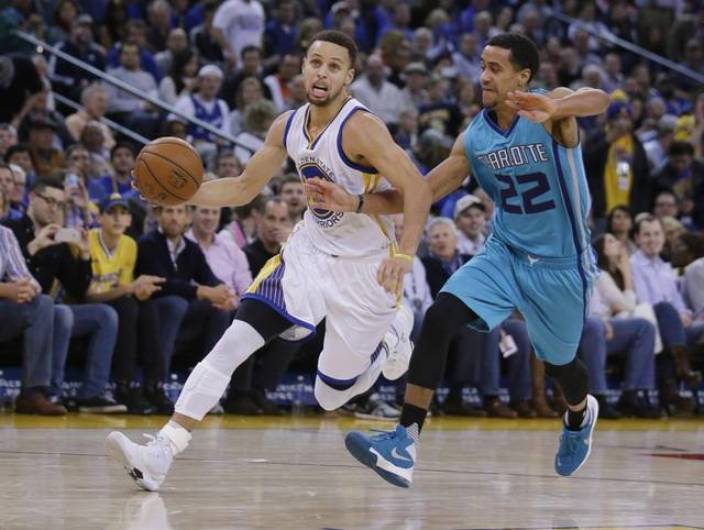 Stephen Curry secured his dominance over his hometown team Monday as the Golden State Warriors stretched their home-winning streak to 35 straight with a 111-101 win over the Charlotte Hornets.

Curry scored 30 points in 31 minutes of playing time after having his previous outing cut short because of a recurring left calf injury.

“I was just trying to go as hard as I could and not feel pain on any of the moves that I made,” Curry said.

Curry went to Charlotte Christian high school and his father Dell Curry works as a colour commentator on the Hornets’ broadcasts.

Reigning league MVP Curry, who appeared unlikely to play earlier in the day, sank 12-of-21 from the field.

“Nothing surprises me with him,” Warriors interim coach Luke Walton said of Curry. “If he’s going to play, then I’m never surprised he’s going to score 30 points.”

The Warriors used an explosive third quarter to pull away from the Hornets with the help of Klay Thompson who nailed two clutch baskets to spark an 18-4 surge that put them in command for good.

Draymond Green posted his seventh triple-double of the season with 13 points, 15 rebounds and 10 assists for the Warriors, who have struggled to close out games recently.

Seeking to avoid getting swept in the two-game season series for the second year in a row, the Hornets clung within 66-65 in the fourth minute of the third quarter after an 11-4 run to begin the second half.

Thompson answered with 16- and 28-footers, the latter a three-pointer. He finished with 30 points, a majority of which came on six-of-11 shooting from beyond the arc as the game turned into a long-distance shooting contest which played into the Warriors’ hands.

Centre Marreese Speights recorded a season-high with 15 points and forward Harrison Barnes, playing for the first time since suffering an ankle injury on November 27, tallied eight points in 18 minutes.

Kyrie Irving scored a season-high 25 points and all five Cleveland starters finished in double figures as the Cavaliers crushed the Toronto Raptors 122-100.

Irving added eight assists and six rebounds, and forward LeBron James had 20 points and seven assists while sitting out the fourth quarter.

“He’s much better than an all-star,” James said of Irving.

“If he continues to play the way he’s been playing but also continues to progress with his game over the years, he can do something that’s very special around this league.

“I’m not going to put too much pressure on him right now, but I know what he can become in this league and tonight he showed it.”

J.R. Smith made a season-high eight three-pointers, accounting for all of his 24 points in front of a crowd of 20,500 at Quicken Loans Arena.

“One hundred points should be good enough to win in this league,” Raptors coach Dwane Casey said. “But until we turn it on defensively, we’re kidding ourselves.”

Guard Kyle Lowry had 23 points and 10 assists, and DeMar DeRozan had 19 points for the Raptors, who twice rallied from big deficits.

Forward Chris Bosh scored 31 points and grabbed 11 rebounds, and guard Dwyane Wade added 27 points to lead the Miami Heat to a 103-100 overtime win against the Indiana Pacers at AmericanAirlines Arena.