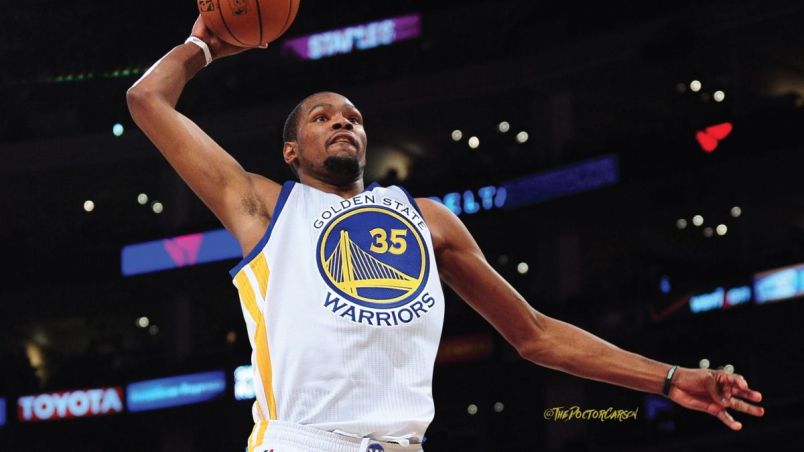 Kevin Durant is set to make a new contract deal and stay with the Golden State Warriors, but the new NBA champions did lose a legendary player on Monday.

Multiple reports said Durant, the Most Valuable Player of this month’s NBA Finals triumph over Cleveland, will opt out of his contract but re-sign with Golden State in a money-saving move under NBA salary cap rules.

But the Warriors lost Jerry West, a member of the team’s executive board who on Monday was named a consultant to the Los Angeles Clippers.

The 79-year-old Hall of Fame guard was an iconic star for the Los Angeles Lakers and the NBA’s logo is designed around his silhouette.

Durant, who joined the Warriors last July after finishing his contract with Oklahoma City, plans to decline his player option for the 2017-18 campaign and become an unrestricted free agent on July 1, according to reports.

The 10-year NBA veteran would then re-sign with the Warriors, the move enabling the team to have more money for contracts with forward Andre Iguodala and other players.

Durant was to be paid about $28 million in salary next season, but he will take about $4 million less than the maximum deal he could have been paid.

That will better enable the Warriors to keep together the championship roster that includes Iguodala, Shaun Livingston, Georgian center Zaza Pachulia and reserves.

Durant won his first NBA crown and helped Golden State claim a second in three seasons by averaging 35.2 points, 8.4 rebounds and 5.4 assists in the best-of-seven NBA Finals, which the Warriors won over Cleveland in five games.

Warriors guard Stephen Curry becomes a free agent, but has taken less than maximum money in recent years to set up an expected five-year deal worth $205 million. Curry made $12.1 million last season.

West spent the past six seasons with the Warriors. The two-time NBA executive of the year was Lakers general manager/executive vice president of basketball operations for 18 years during which the team won four NBA crowns. He also served as the president of basketball operations for the Memphis Grizzlies from 2002-2007, the team making its first three playoff appearances during West’s tenure.

As a player, West was a 14-time All-Star who went to the NBA Finals nine times but won only once. He averaged 27 points, 6.7 assists and 5.8 rebounds for his career. – Agence France-Presse