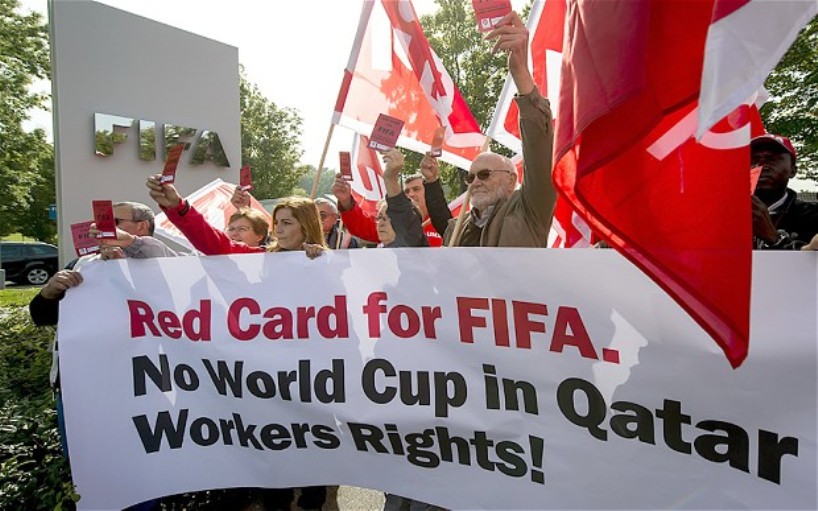 The Netherlands’ largest trade union and one of its members are threatening to sue FIFA for failing to halt alleged abuses of workers’ rights in 2022 World Cup hosts Qatar, the union said on Monday.

The FNV Bondgenoten “together with (a) Bangladeshi worker wants to take FIFA to court to demand an end to modern slavery”, the union said in a statement.

It served a summons against FIFA on Monday, saying: “FIFA has three weeks to react to the demand, after which a case will be opened at a Zurich court,” where football’s governing body is situated.

The summons comes after rights groups accused Qatar of abusing the rights of more than 5,000 workers helping to build the facilities for the Gulf state which will host the 2022 World Cup.

In March, Amnesty International published a report saying workers at the Khalifa International Stadium, mostly from Bangladesh, India and Nepal, were lied to about their salaries, went unpaid for months and were housed in squalid accommodation, which it claimed amounted to forced labour.

One of the workers is Nadim Shariful Alam, 31, who belongs to the FNV’s international branch, and is a co-plaintiff in the 1.1 million-member FNV’s case.

“In exchange he had to unload ships for a year-and-a-half as a modern slave, live in dreadful conditions with thousands in a specially-built camp and had to hand in his passport,” the union said.

In a 127-page summons, the FNV said that apart from Alam, it is also suing on behalf “of thousands of male migrant workers employed under dire circumstances”.

It has demanded that FIFA “take responsibility and end the exploitation of labourers in Qatar,” as it “is the owner of the World Cup”.

It also wants FIFA to “enforce the rights of World Cup-related workers” and pay Alam 10,000 euros in compensation.

Qatar, which has responded to the criticism and already in 2014 vowed to improve workers’ conditions, has insisted the Amnesty report painted a “misleading picture”.

FIFA confirmed on Monday it has received the letter, but added it “has not been served by a court with any claim related to this matter”.

FIFA chief Gianni Infantino announced in April it will establish a body to monitor working conditions in Qatar. – Agence France-Presse