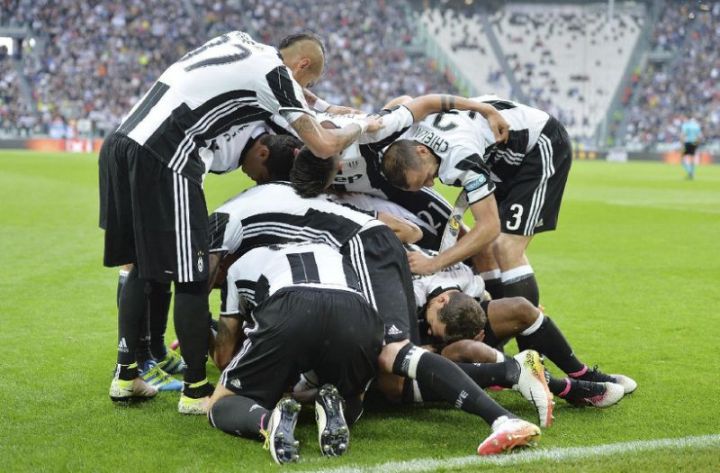 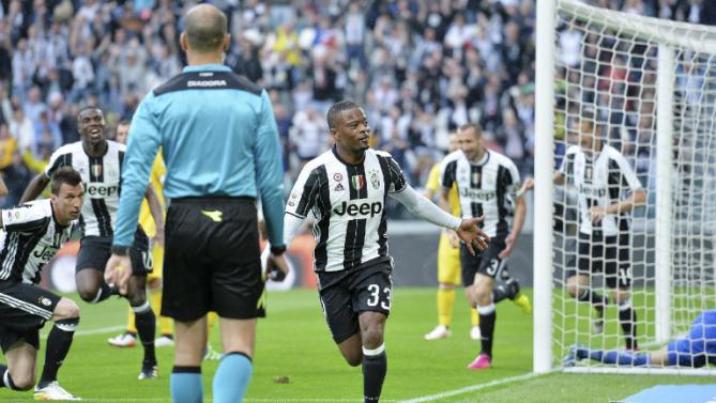 Paulo Dybala hit a brace and provided an assist as Italian champions Juventus capped their sterling Serie A season with a 5-0 rout of 10-man Sampdoria on Saturday.

Juventus secured a record-equalling fifth successive title without kicking a ball last month thanks to Roma’s late 1-0 win at home to Napoli.

In their final home match of the league campaign, Massimiliano Allegri’s men were looking to put the cherry on the cake — and the Bianconeri delivered in style.

Minutes later, Juve got in front when French wing-back Patrice Evra sent a diving header into the top corner from Dybala’s free-kick, despite appearing to be in an offside position.

Dybala opened his account from the penalty spot on the quarter-hour when Mario Mandzukic was hauled down by Martin Skriniar, who saw red as he was the last man.

It was the Argentine’s 22nd goal of the season and meant he overtook the 21-goal tally set by compatriot Carlos Tevez in his debut season with the Turin giants.

Tevez left a huge impression on Juve’s fans in a two-year spell at the club before leaving for Boca Juniors last year, and Dybala suggested no one expected him to surpass his compatriot’s goalscoring achievements in his first year.

“I think no one expected a season like that after Tevez’s first year. I’m delighted, it’s been a great day and we get to lift the trophy in front of the fans,” Dybala told Sky Sport.

Juventus face AC Milan in the final of the Italian Cup next Saturday. As holders, and given Milan’s current woes, they will be expected to prevail.

But after a rollercoaster season that saw Juve launch a dramatic fightback thanks to a 26-match unbeaten run that included 25 wins, Allegri said: “I’m happy because it’s been a wonderful day. The lads achieved something truly unbelievable, winning 25 games from 26.

“They deserve huge applause for the way they worked for the club, and for each other. They never gave up, even when things weren’t going well for us.”

Juve could have had more, Dybala forcing Serie A debutant keeper Alberto Brignoli into action before Stephan Lichtsteiner’s glancing header came off the crossbar.

A Mandzukic shot was deflected just wide of Brignoli’s upright and after sending a great chance over the bar Dybala hit his second, and 23rd of the season, with a great left-foot strike from outside the box.

It was all one-way traffic and after Paul Pogba shot wide, Juve’s celebrations were complete when defenders Giorgio Chiellini and Leonardo Bonucci added their names to the scoresheet in the final quarter hour.

Chiellini, making his first start since April 2, sent a half-volley from a deflected corner past Brignoli in the 77th minute, with Bonucci tapping home from close range three minutes from the end after striker Alvaro Morata nodded on a corner.

Juventus, who finish the season on 91 points, hold a 12-point lead on second-placed Napoli.

Napoli are two points ahead of Roma in third and will look to hold on to the league’s second automatic Champions League qualifying place when they host already-relegated Frosinone later Saturday.

Maurizio Sarri’s men have extra incentive as they failed to qualify for Europe’s premier club competition this season after a summer play-off defeat to Athletic Bilbao.

A slip-up at the San Paolo would be welcomed by Roma, who face Europa League-chasing AC Milan at the San Siro.

In Saturday’s other match Sassuolo, in sixth place with a one-point lead on Milan, host Inter Milan. – Agence France-Presse