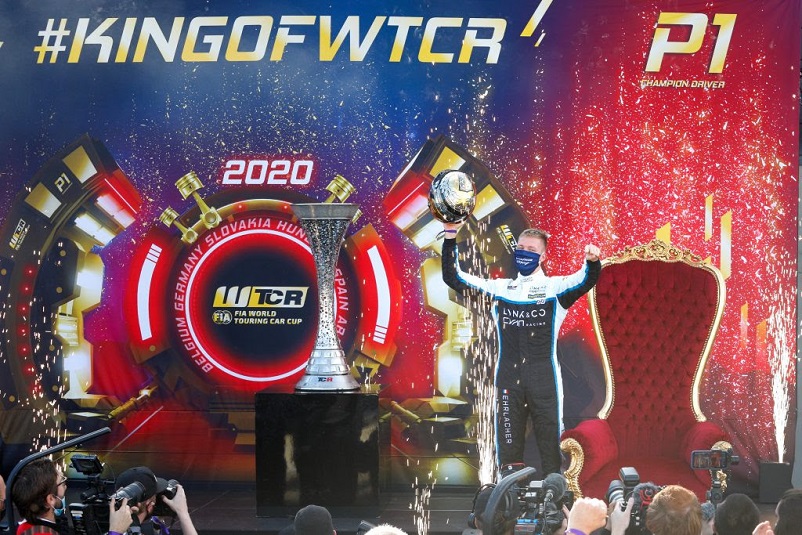 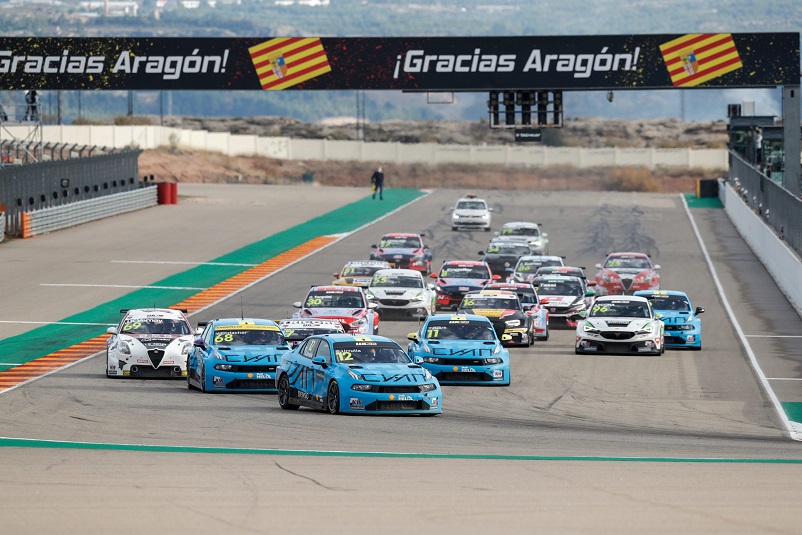 Another WTCR − FIA World Touring Car Cup season decider packed full of drama began with a sensational victory for Ehrlacher’s chief rival Esteban Guerrieri − from P16 on the grid − but ended with a first WTCR title for France following on from success for Italy’s Gabriele Tarquini and Hungary’s Norbert Michelisz in 2018 and 2019 respectively, plus a breakthrough maiden race win for Uruguay’s Santiago Urrutia.

Ehrlacher, whose uncle Yvan Muller has four FIA World Touring Car Championships to his name and won Race 2 for Cyan Racing Lynk & Co, has worn the coveted yellow jacket as the Goodyear #FollowTheLeader all season.

Despite Guerrieri’s victory for Honda-powered ALL-INKL.COM Münnich Motorsport trimming his title advantage to 16 points after Race 1, Ehrlacher remained composed starting Race 2 and he duly became King of WTCR when Guerrieri was forced to pit with damage.

But Ehrlacher’s title didn’t hinge on the results of the WTCR Race of Aragón weekend. A three-time winner in 2020, Ehrlacher belied his lack of experience to win World Touring Car racing’s biggest prize on the back of an impressive campaign.

The previous youngest FIA World Touring Car title winners were Andy Priaulx and José María López, who were both 31 when they became champions for the first time in 2005 and 2015 respectively.

Muller, who fittingly won the race in which his nephew became King of WTCR, was one of the first to congratulate Ehrlacher amid emotional scenes in the MotorLand Aragón pitlane. And by finishing fourth in Race 3, Muller secured the runner-up spot with fellow Frenchman Jean-Karl Vernay taking third and the WTCR Trophy for independent racers.

Guerrieri appeared to have done enough to beat Vernay to third place after Attila Tassi, his fellow Honda-powered driver, slowed to hand him the vital point he needed to beat his rival. But a 30-second drive-through penalty for track limits infringements dropped Guerrieri down the order to leave Team Mulsanne-run Vernay to celebrate third position after an impressive season in his Alfa Romeo Giulietta Veloce TCR by Romeo Ferrraris.

After losing out on the WTCR title at the season finale for a third successive season, Guerrieri can nevertheless lock back on a stellar campaign in his Honda Civic Type R TCR. As well as setting the record for the most WTCR wins, Guerrieri’s Race 1 triumph was the stuff of legend, although he owed a huge debt of gratitude to his team-mate Néstor Girolami.

Guerrieri’s fellow Argentine also opted for slick front Goodyear tyres and wet-weather rear covers and excelled by charging from P11 on the grid to lead by the end of lap one. But with Guerrieri desperately needing as many points as possible, Girolami moved over on the final lap to allow Guerrieri to win for a fourth time in 2020.

Gilles Magnus, who won the WTCR Rookie Driver award at the penultimate event of the season, overtook his Audi-powered Comtoyou team-mate Nathanaël Berthon in Race 1 but lost out on a second top-three in Race 2 when home hero Mikel Azcona demoted him to fourth on the final lap in his Zengő Motorsport-entered CUPRA Leon Competición. Azcona finished behind Vernay and winner Muller with Vernay joining winner Urrutia and second-placed Ehrlacher on the Race 3 podium.

Urrutia’s first victory in his Cyaan Performance Lynk & Co 03 TCR follows on from him becoming the TAG Heuer Most Valuable Driver at WTCR Race of Spain earlier this month, an award shared this time by Muller and Vernay, who both scored 49 points to conclude the 2020 season.

Norbert Michelisz’s tenure as the King of WTCR ended with a weekend-high fifth in Race 2 for BRC Hyundai N LUKOIL Squadra Corse, while Azcona was three times in the top three as Thed Björk took sixth in Race 3 for Cyan Performance Lynk & Co.

RACE WINNER QUOTES
Race 1: Esteban Guerrieri (ALL-INKL.COM Münnich Motorsport, Honda Civic Type R TCR)
“It was crazy actually. It was a crazy start to the day. It’s sunny but this track, we knew when we came here [for testing] in March that it’s got some similar conditions to this and we were wondering why it takes so long to dry – and it was kind of the same thing, so we said ‘OK, let’s do it’. Also, in the warm-up laps coming out of from the pits I had wets on the rears and I had cars in front with full slicks and they couldn’t drive. Then we went to the grid, we huddled together and said ‘look, there is nothing to lose here, we better gamble’. We know this track is extreme on drying slowly, even though the sun was scorching the Tarmac. We did the right strategy, Obviously it was not easy because we were all starting out of the top 10. But we climbed the order, we were very smooth on the overtaking, trying not to get any hit or anything. We kind of kept pushing until three-quarters of the race in case the track gets dry or there’s a safety car. But in the end we just knew we had it in the bag and Néstor let me by on the last lap. Obviously I’m very thankful to him. We did the team strategy because obviously I need the points. It’s going to be very difficult to be honest, but these five points are important. It’s his win, but the points in the end are what matter. We are very happy with the one-two, we have very small tool and weapons to fight this weekend, because the others have a gun and we have a knife. But we still play very well with our concentration, with our heads, and we played smart and it paid out. So, I’m very thankful to the team, to Honda. So yep, it’s a win and a one-two, so very happy.”

Race 2: Yvan Muller (Cyan Racing Lynk & Co, Lynk & Co 03 TCR)
“Winning was not my priority, I could have won one at Budapest, but I gave that to Yann. My target was to help make Yann the world champion and he is now. I made a good start, then I pushed hard for five laps, then I said OK, keep cool a bit. Then there was the safety car so I lost everything. But I had some tyre left so it was OK. When I came to see François Ribeiro [WTCR promoter] when Yann was 17 years old I said you should put some money on him because he will be world champion, and now he is.”

Race 3: Santiago Urrutia (Cyan Performance Lynk & Co, Lynk & Co 03 TCR
“To finish the season with a win is awesome. But I have to look back a little bit. I was in America with nothing when I received a call from the team. Then we had a test at Anderstorp and they decided finally to sign me, so I became a professional driver for the first time. They gave me the chance and believed in me, even if they didn’t really know who I was. They trusted in my talent and we win the championship with Yann and we win the championship with Cyan, so it was not just a good year for me but for the whole team. First of all I have to say thank you to Cyan, without them I wouldn’t be here taking this win today. And about today, all I can say is I got a good start, then I knew I had Yann behind and he was already champion. He was probably a little bit quicker than me, but he stayed behind me so thank you to Yann. For me this was a season to learn, to understand the championship. To race with the best drivers in the world is not easy, sometimes it is very hard, you need to be really 100 per cent on every weekend if you want to fight and win races. This is just the first season I hope of many, now we go to Uruguay tomorrow to enjoy a bit of time and the summer holidays, and I hope I can come back next year to fight with my team for more.”