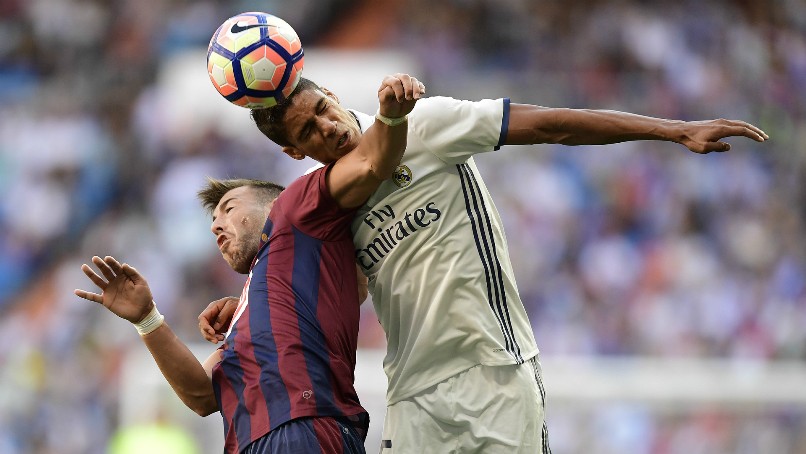 Real Madrid surrendered top spot in La Liga as they failed to win for a fourth consecutive game in a 1-1 draw at home to Basque minnows Eibar on Sunday.

Atletico Madrid now lead their city rivals on goal difference at the top of the table despite missing two penalties as Antoine Griezmann and Kevin Gameiro netted in a 2-0 win at Valencia.

Barcelona can go top with victory at Celta Vigo later on Sunday.

The population of Eibar would fit into Madrid’s Santiago Bernabeu stadium three times over, and the travelling fans celebrated their first ever league goal against Madrid when Fran Rico headed home Pedro Leon’s cross despite Keylor Navas’s best efforts after just six minutes.

Normal service appeared to have been resumed just nine minutes later when Cristiano Ronaldo’s lofted cross to the back post was headed home by Gareth Bale for his 50th La Liga goal.

However, Real were met with a cacophony of whistles at full-time as they failed to convert their pressure into a winner after the break.

The European champions badly missed the presence of Luka Modric, who is set to be sidelined for a month after undergoing knee surgery on Sunday morning.

Eibar could even have retaken the lead when Leon waltzed past Danilo before his rising drive was beaten behind by Navas.

Real took almost an hour to get firm control of the game and Ronaldo had the chance to snatch the three points when he blasted over from point-blank range.

A super Bale header also came back off the post and substitute Alvaro Morata had a goal rightly ruled out for offside as Eibar held on for a historic point.

Earlier, Valencia goalkeeper Diego Alves’s heroics couldn’t deny Atletico as he extended his exceptional penalty record with stops from Griezmann and Gabi either side of the Frenchman’s opener just after the hour mark.

However, Gameiro finally sealed a deserved three points for Atletico in stoppage time.

New Valencia coach Cesare Prandelli watched on from the stands before officially taking charge on Monday, but other than Alves taking his record of saved penalties to 22 from 45 faced in Spanish football, there were few positives for the Italian.

“It doesn’t make any difference to me. I wanted to win the game, which was the most important thing,” Alves told BeIn Sports Spain.

“If I save penalties and it helps the team I am delighted, but if we lose I don’t care.”

The Valencia stopper made a spectacular save to turn a fierce Griezmann effort onto the roof of the net early on.

Alves’s best stop was still to come, though, as the visitors were awarded a penalty two minutes before half-time.

Griezmann had hit the bar from the spot against Bayern in midweek, but there was little more the French international could do as his well-struck penalty was brilliantly turned behind.

However, Griezmann has now missed four of the six penalties he has taken for Atletico.

Atletico’s quality off the bench paid dividends when they finally made the breakthrough in the second half.

Substitutes Yannick Carrasco and Fernando Torres combined and despite the latter’s effort being brilliantly saved by Alves once more, Gameiro teed up Griezmann for his sixth La Liga goal of the season from the rebound.

Gameiro should have sealed the three points five minutes later when he fired straight at Alves when one-on-one, but again Atletico made the most of the second ball as Mario Suarez chopped down Griezmann.

Atletico captain Gabi took over penalty duties, but again Alves couldn’t be beaten from the spot.

Nani and Eliaquim Mangala forced Oblak into saves late on as Valencia made a valiant push for the equaliser.

Yet, the hosts were finally caught out deep into stoppage time when Gameiro burst through on goal and this time slotted past Alves, sparking wild celebrations from Simeone on the sidelines. – Agence France-Presse