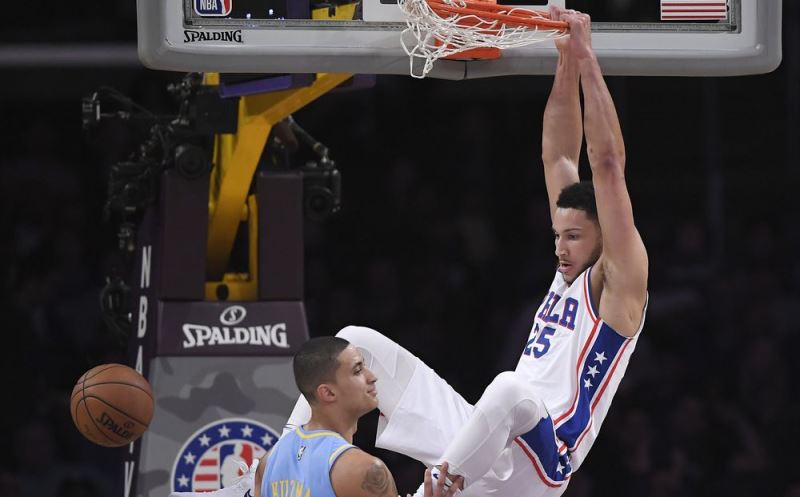 The dominating 23-year-old Cameroon 7-footer (2.13m) sank 14-of-20 shots from the floor and 16-of-19 from the free throw line, pulled down 15 rebounds, passed out seven assists and blocked seven shots.

“Just being aggressive,” Embiid said of the reason for his epic night. “I just wanted to come out and get down low and be a (force) down there.”

Embiid, who had 19 points in the fourth quarter, produced the highest-scoring game for the 76ers since Allen Iverson scored 46 in 2006.

No player in NBA history had scored 46 points with 15 rebounds in a game while adding so many blocks and assists and Embiid warned he still isn’t in top form.

Australian guard Ben Simmons, 21, added 18 points, nine rebounds, 10 assists and five steals for the 76ers in a stunning effort that was nonetheless overshadowed by Embiid’s heroics.

“At the beginning I thought we were so young and we had to work so hard. But we have come along. We’ve still got a lot of work to do but it’s coming together.”

Brandon Ingram, 20, had a career-best 26 points and 11 rebounds to lead the Lakers while Kyle Kuzma, 22, added a career-high 24 points but highly touted 20-year-old Lonzo Ball spent the fourth quarter on the Lakers bench for the second game in a row, managing only two points.

LeBron James scored 31 points to lead the Cleveland Cavaliers in a 115-107 triumph at Charlotte. It was the third win in a row on a four-game road trip for the Cavs (8-7).

“We faced a little adversity throughout some of the games and you’ve got to be resilient.”

Kevin Love added 22 points and 10 rebounds for Cleveland while France’s Nicolas Batum scored 16 points for Charlotte in his first game of the season following elbow surgery.

“Obviously Nic makes such a difference and as he gets more into rhythm I think you’ll start to see the potential that our group has,” Hornets coach Steve Clifford said.

Dennis Schroder scored 21 points while Dewayne Dedmon had a career-high 20 points and added 14 rebounds as the Atlanta Hawks routed Sacramento 126-80.

The Hawks (3-12) enjoyed their first home win this season and most lopsided victory since beating Detroit 141-97 in March 1994.

The Jazz were without injured French center Rudy Gobert while the Knicks did not use French center Joakim Noah, eligible after serving a 20-game performance-enhancing drug suspension.

John Wall produced 27 points and Bradley Beal contributed 26 to lead the Washington Wizards to a 102-93 victory at Miami while Karl-Anthony Towns had 26 points and 16 rebounds to lead host Minnesota over the San Antonio Spurs 98-86.

Indiana guard Darren Collison scored a season-high 30 points as the Pacers outlasted host Memphis 116-113 while Portland’s Damian Lillard had game highs of 26 points and 11 rebounds in a 99-94 win over visiting Orlando. –Agence France-Presse