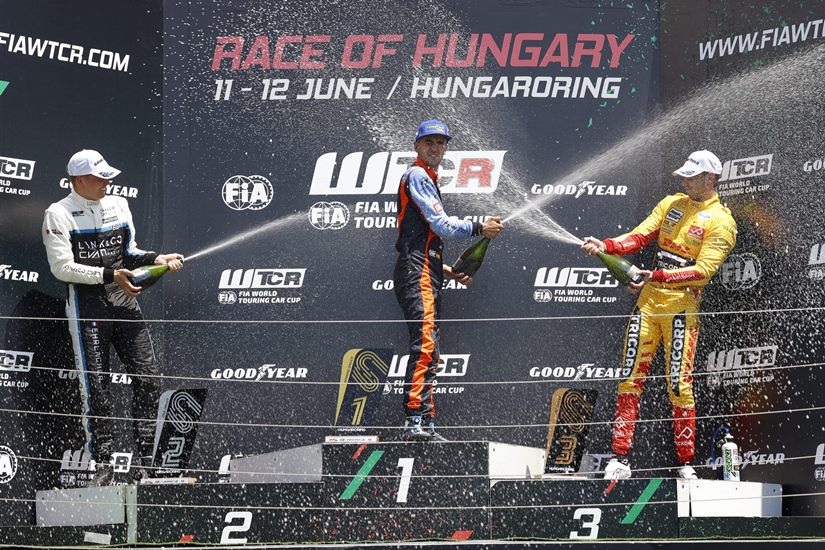 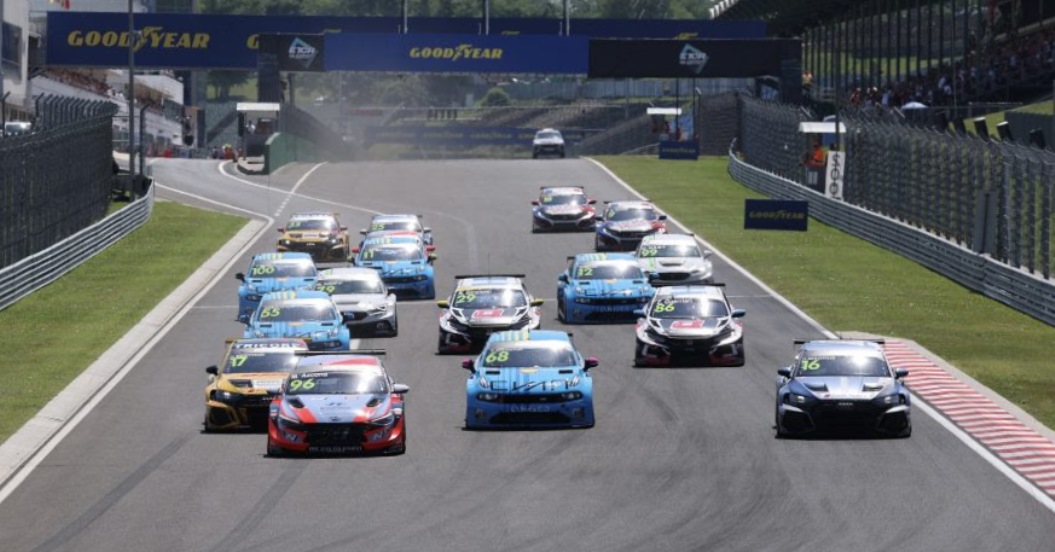 Mikel Azcona emerged from a sun-baked Hungaroring as the WTCR − FIA Touring Car World Cup’s new Goodyear #FollowTheLeader after he claimed his second win of the season in fine style for BRC Hyundai N Squadra Corse.

Driving a Hyundai Elantra N TCR, the 25-year-old from Spain produced a faultless drive from pole position to win Race 1 and move ahead of ALL-INKL.COM Münnich Motorsport’s Néstor Girolami at the top of the provisional WTCR standings.

The Belgian, 22, took the 10 points on offer for posting the fastest time across the three sections of Saturday’s action-packed Qualifying. He then beat China’s Ma Qing Hua to fourth place in Race 1 before taking the chequered flag in Race 2 in seventh position.

But while Magnus placed seventh, Santiago Urrutia took the Race 2 victory from the partially-reversed grid, the Uruguayan resisting intense pressure from Rob Huff throughout the 14-lap spectacular. Despite Huff’s every effort aboard his Zengő Motorsport CUPRA Leon Competición, Urrutia held on by 0.380s behind the wheel of his Cyan Performance Lynk & Co 03 TCR as Huff made it a double triumph in the WTCR Trophy for independent racers.

It was almost as close in the battle for third place between Girolami and home hero Norbert Michelisz with the Argentine proving resolute in his defence. They were separated by 0.745s across the finishing line as Ma delivered another consistent weekend by placing fifth ahead of Ehrlacher.

A six-place grid penalty for a clash with fellow Hungarian Attila Tassi carried over from the first event of the season in Pau dented Michelisz’s chances of a strong result in Race 1, the 2019 King of WTCR settling instead for 12th with the vociferous local fans cheering his every move.

Dániel Nagy endured a tough weekend for local team Zengő Motorsport. After a mechanical failure led to a high-speed crash in the second phase of Qualifying, the Hungarian was nudged wide by Tom Coronel in Race 1 and could do no better than P17 in the final classification as a result. He attempted to hit back but more contact led to lengthy repairs and he wasn’t classified in the final results.

Meanwhile, Tassi, who at 22 was the youngest of the Hungarian trio in action this weekend, drove his LIQUI MOLY Team Engstler Honda Civic to P14 in both races.

RACE 1: Mikel Azcona (ESP) BRC Hyundai N Squadra Corse, Hyundai Elantra N TCR
“I’m really happy. The start is very important in these races, especially at this track. Sector 2 is normally very difficult to overtake. I did my best from the start and tried to defend at T1 and T2 which is normally where all the overtakes happen. But, in the end, we had a fair battle in T1 and T2 and I took the inside which is the best position. From this point I tried to manage sector 2 to make a gap. It’s always easier when you are in front and you have clear air, where you don’t have cars in front. In the end I tried to use this opportunity and it worked. No mistakes, tried to save the car in four wheels until the end of the race and I’m very happy. Thanks to the team, the car was working amazing and I have to say the front tyres were amazing.”

RACE 2: Santiago Urrutia (URY) Cyan Performance Lynk & Co, Lynk & Co 03 TCR
“Yeah, it was tough. I hear some drivers who say when they take a pole position ‘it was the lap of my life’. This is the race of my life. I’m not sure because I don’t remember every race that I have done, but I tell you this one was really really hard. I could not make a mistake since lap one because I knew Rob was quick. Before the race, I saw him in race one and he was so quick on the first lap so I knew if I don’t make a gap it’s going to be difficult. I did a good start but I could not manage to make a gap because he was always behind me, I could always see him close in my mirrors. Then came the safety car. Under the safety car I said OK, it can go either way: either I will go quicker or slower, because you don’t really know how your car will react after that. I had to do a good restart and I did do a really good restart and that’s what give me the win at the end. But again, congrats to Rob who was really good and also to Néstor who had kilos in the car and were really quick. I’m happy for my people, Cyan Performance Lynk & Co. Another win in this track [after last year].”