Sports247
Home 2017 Excitement till the very end in Vios Challenge 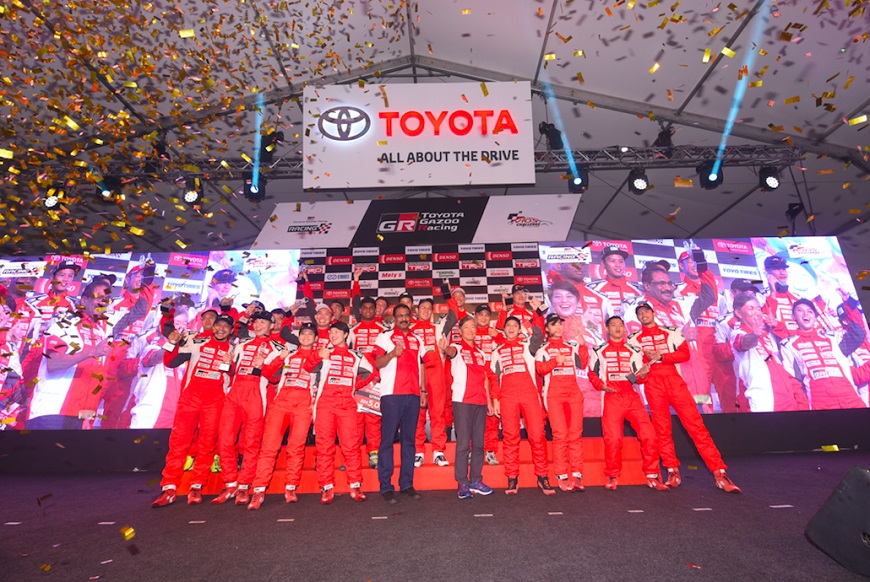 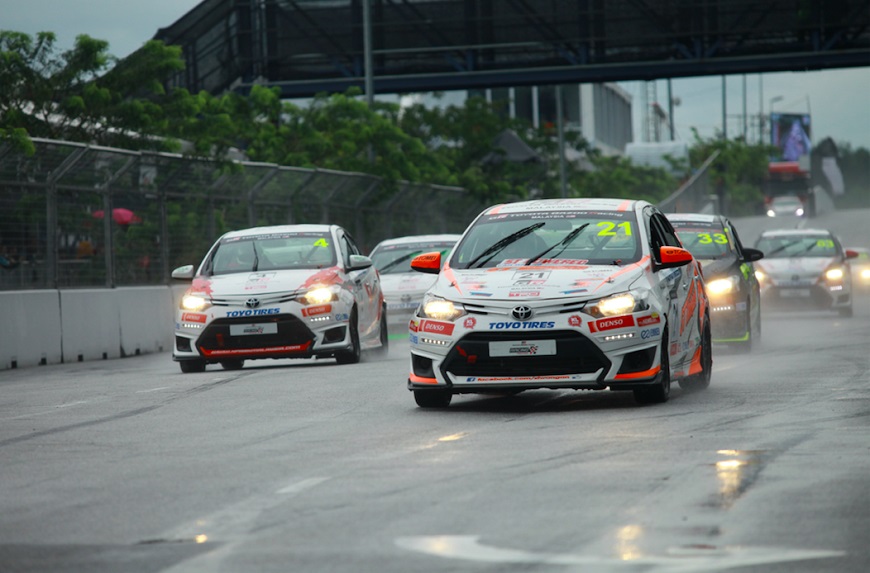 The surprising results from Saturday’s races in the Vios Challenge carried on to Sunday’s events and heaped on the added element of excitement to the plot.

All three classes of racing yielded plenty of oohs and aahs from the crowds who were riveted to the action of the day’s events at the Toyota GAZOO Racing (TGR) Racing Festival.

The first draw of the day came from the Super Sporting category where Mark Darwin who made a great start from pole and moved over to defend his position.

However, he had closed the door well into Tengku Djan and the pair contacted, sending Darwin into the outside wall and forcing him into retirement.

The race had to be restarted sans Darwin and with Djan alone on the first row, made a clean run to pull ahead of the pack made up of William Ho, Mitchell Cheah and Ser Ming Hui.

However, Djan’s bumper began to flail from the earlier collision and was pulled into the pits on lap 4 to remove the offending part, dropping him into eighth.

William Ho then had to face a charging Mitchell Cheah who sniffed the opportunity to take the win and muscled his way past William on the next lap. The move broke Ho’s side skirt, forcing him to pit to remove the part.

Ser Ming Hui took advantage of the melee to inherit the lead which he held to the chequered flag. Mitchell was handed a 15 second penalty for jumping the start thus promoting Syafiq Ali and Boy Wong to second and third respectively.

In the Promotional Class, Shawn Lee had been expected to make a clean sweep of his wins once again in Race 2 but to the surprise of his rivals, made a rare mistake in the fast Turn 6 on the opening lap.

The spin left him pointing the wrong way on the track and he had to let all his rivals pass before he could get moving again.

This promoted Shukri Yahaya to the lead with Danny Koo in second place. Diana Danielle who had been clocking respectable times managed to secure the third spot, managing to be the first lady to stand on the podium in the Vios Challenge.

Bad luck however struck Janna Nick, Venice Min and Geraldine Gan as they had to retire from their fine run.

In the Sporting Category, Brendan Paul was expected to go for an easy second win but he lost in his drag to the first corner to Brandon Lim and Patrick Tam who made a quick breakaway.

Patrick kept the pressure on Lim and on Lap 4, he made a brave move to dive into Turn 16 and into the lead. The pair pulled clearly away and both were trying to out pace each other all the way through the race.

The battle began brewing lower down the field with Geraldine Read having a great scrap with Adzeem Eqwan, Tan Seng Lock and Tan Su Teik but it was Read who took the brunt of it and had to drop out of the battle and into the clutches of the leading duo who were lapping the field.

Patrick caught Read in the dying stages of the race and in her haste to yield to a blue flag, she came into Brandon Lim’s path thus ending his charge for the win.

The biggest excitement was for the final race of the day, the second Super Sporting Class race. Despite the delay due to torrential rain, the crowd remained to watch the race was not to be missed.

The top six from the previous race were now lined up on the grid in reversed order. By token of his fifth position in Race 1, Djan once again found himself on the front row beside the young Mitchell Cheah who finished sixth.

As the track remained sodden, the race began in earnest after the convoy followed the Toyota Camry safety car for the initial three laps.

Tengku Djan was gunning hard but the young Mitchell of the Dream Chaser Team had none of it. He was a picture of calm despite Djan’s incessant attempts at passing.

Lap 9 saw Djan tap the Dream Chaser Team’s car, sending Mitchell wide. Despite that, Mitchell managed to recover his Vios and did not lose his first spot.

Djan continued to relentlessly pursue Mitchell but as the pair continued to tangle, William Ho slowly crept up on the duo from his lowly 7th position.

William Ho found his opening and made a daring dive into the tight Turn 16 on lap 12 but Djan refused to yield. The pair traded paintwork up the hill and in the process, Djan suffered a puncture and had to pull out of the race.

William himself suffered a slow puncture but not before he was slapped with a 15 second penalty for his move on Djan. Boy Wong who remained safe throughout the race took a well-deserved 2nd ahead while William managed to limp home into third despite the penalty and puncture.

“It was quite a stressful first few laps with Djan behind me. All I had on my mind was to go in the corner slow and come out faster to stay in front of Djan,” said the delighted Mitchell.

The crowd that turned up at the MAEPS leg of the TGR Racing Festival was truly rewarded with excellent racing and great entertainment from both the racing action as well as the off-track activities.

It is an event not to be missed and our southern fans can look forward to the next Toyota GAZOO Racing (TGR) Racing Festival on 19th and 20th January 2018 in Johor Bahru.