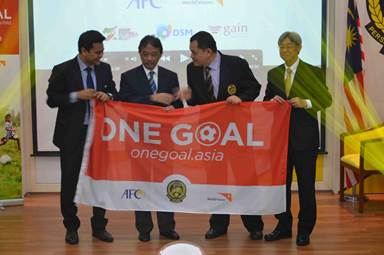 THE Football Association of Malaysia (FAM) today announced their pledge to support the regional One Goal nutrition awareness campaign that is spearheaded by the Asian Football Confederation (AFC) and World Vision.

Focused on providing nutrition for every child in Asia by leveraging on the power of and the passion for football in the region,  the ‘One Goal’ campaign seeks to tackle the poor nutritional practices and access that have been holding back Asia and Asian football.

FAM will raise awareness for the initiative by displaying the One Goal flag, which highlights the campaign website onegoal.asia, during all Malaysian matches played from now on, beginning with the match between Malaysia and the Philippines on 1 March 2014.

With the 10-year long One Goal campaign having only been launched in November last year, Malaysia is leading the way as the first country to pledge support via its national football governing body.

“The football association of Malaysia is proud to be amongst the first to lend its support to such a worthy cause. If all regional footballing bodies can come together to address this concern of proper early nutrition, I believe we will have a better chance of seeing the children of tomorrow take Asian nations to the next level,” said Sultan Ahmad Shah.

Asia is home to close to 578 million of the 1 billion malnourished people around the world, while some 100 million of the 165 million children globally who are stunted – a condition where physical and intellectual growth is impaired due to chronic under nutrition – are Asian.

On top of the One Goal campaign, FAM will also work with AFC, Asian Development Bank (ADB), Joint United Nations Programme on HIV/AIDS (UNAIDS) on a football-based HIV/AIDS Communications Campaign and prevention programs that will help tackle the risk of HIV transmission among young people.

Informational videos and more information on the One Goal campaign can be found at www.onegoal.asia.