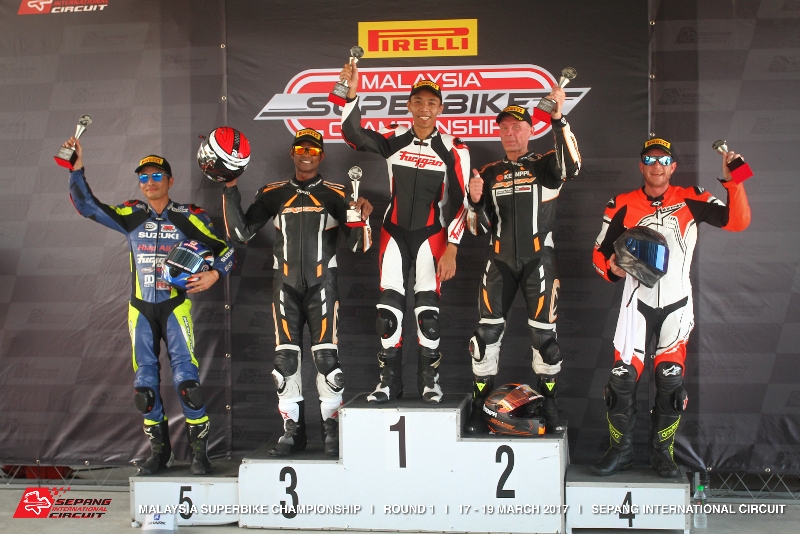 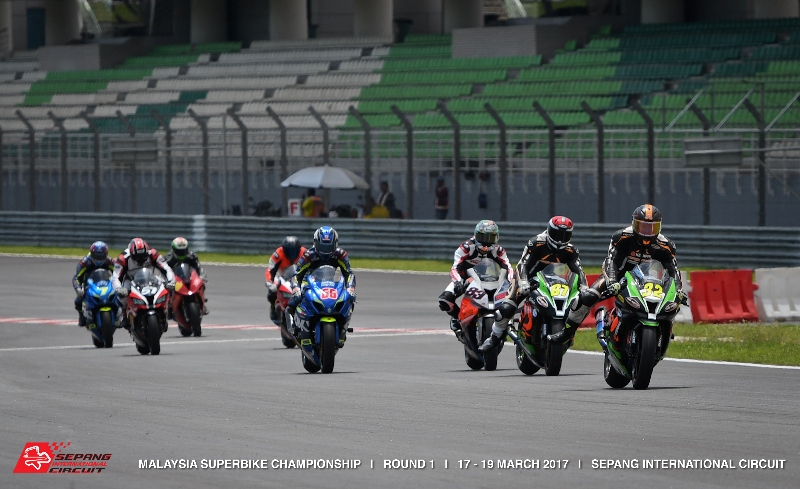 Riding a BMW HP4 machine for HKM Times Bike Racing Team, Farid, who failed to finish Race 1 yesterday, survived a strong challenge from Jouni Karhu to win the 24-lap contest around SIC’s 2,609-meter South Track in 25 minutes 34.918 second to deny the Finland’s mission for a double victory for Round 1.

Third in yesterday’s opening race, Jonathan Serrapica turned the tables on Malaysian Nasaruddin Yusoff and Scotland’s Keith Parrot when the Swiss rider won Race 2 despite a strong challenge from his Malaysian and Scottish rivals.

Serrapica secured victory in 26 minutes 10.007 seconds on his Yamaha R1 machine; with Race 1 winner Nasarudin Mat Yusop taking second place in the 24-lap contest in his BMW S1000RR machine. Parrot, who was second yesterday for Race 1, had to be contended with third place.

Nasaruddin now leads the Superstock Championship with 45 points; with Serrapica in second with a total haul of 41 points. Parrot is third with 36 points and four more rounds to go.

It was a similar story in the Supersport Championship when former Moto2 rider Azlan Shah Kamaruzaman, who has a DNF for Race 1 yesterday, scored a sensational victory to totally outclass his rivals.

Azlan, who adopted a wrong tyre strategy for the opening race and ending up failing to finish yesterday’s race, was like a rider obsessed when he blasted from the back of the grid to second place by midway through the first lap before taking leadership in Race 2 from Race 1 winner, Ismael Smalji.

The Bike Art Racing rider was clearly a class of his own; as he continued his blazing speed and eventually finishing the 24-lap race more than 44 seconds ahead of his team-mate Smalji. Iqbal Quzaimy Azhar of ARD Performance Motorsports took third to complete the podium while the other riders were classified a lap behind or more.

After one round, Smalji now leads the championship with 45 points.

The KTM RC championship witnessed a total domination of Muhammad Ibrahim Norrodin-the younger brother of SIC Racing Team Moto3 rider, Adam Norrodin – who supplemented his Race 1 victory with another comfortable win for a double win in the Orange Class for Round 1.

In a 16-lap race under scorching heat, Ibrahim Mohd Norrodin took the chequered flag in 20 minutes 18.160 seconds to beat Mohammad Reihan and Izam Ikmal Izamli, who finished second and third for today’s race.

Full actions of all today’s race were screened live on SIC’s official Facebook page and Youtube through live streaming, capturing more than 110,648 viewers at its peak with up to 533,417 reach.