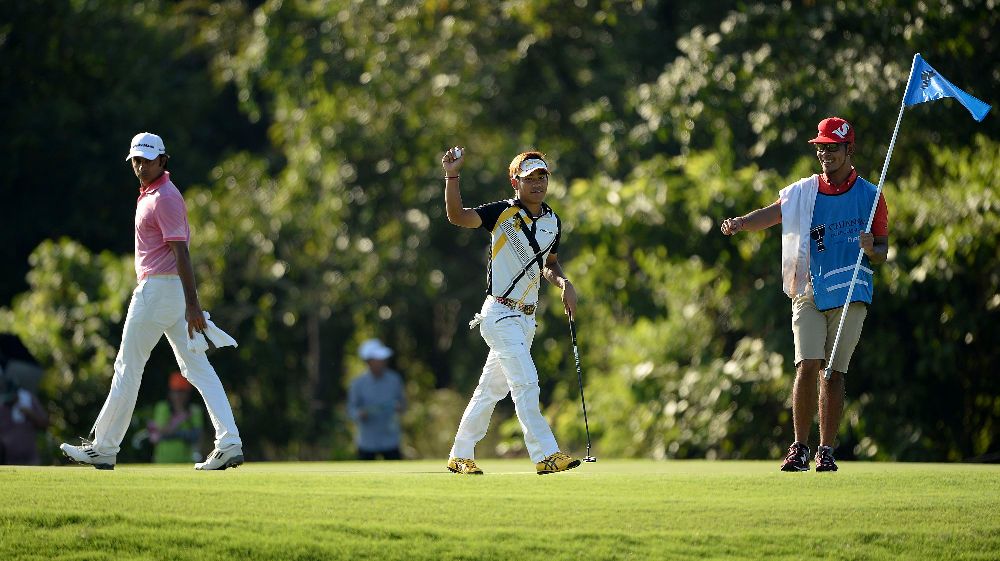 Thanyakon Khrongpha stayed on track to win a first Asian Tour title after firing a five-under-par 67 in the third round of the Chiangmai Golf Classic presented by PTT on Saturday.

The lanky Thai tapped-in for birdie on the last hole for a 15-under-par 201 total which was two shots better than Indian duo Rashid Khan, who produced a superb 66, and overnight leader Jyoti Randhawa, whose 70 kept him in contention to win his ninth Asian Tour title.

Australian rookie Kalem Richardson fired the low round 64 to tie for fourth place with countryman Scott Barr on 204 at the US$750,000 Asian Tour event staged at the majestic Alpine Golf Resort Chiangmai.

Reigning Order of Merit champion Kiradech Aphibarnrat of Thailand placed himself in the title mix following a bogey-free 66 while Major champion Jason Dufner of the United States slipped to tied 24th following a 73.

“I’m feeling a little nervous but I think there is more excitement than pressure,” smiled Thanyakon, who won the gold medal in the team event at the 2007 and 2009 South East Asian Games.

A three-time winner on the local circuit last year, the 24-year-old Thanyakon was cruising on three-under before dropping two bogeys on 11 and 12. He bounced back immediately with three straight birdies from the 13th hole before narrowly missing an eagle putt on 18.

“I felt a little angry with myself after I bogeyed 11th and 12th. I could have avoided it but I told myself to get over it and I’m glad I was able to recover strong. Overall, today’s result was much better than I expected,” said the Thai.

Khan, who won his first Asian Tour title on home soil in March, birdied the last two holes to stay in the title mix. He reaped the rewards of working with a mental coach, saying it has helped him stay patient on the course.

“I’m excited but I’ll need to keep doing what I’ve been doing. I was struggling with my irons and gave myself long putts which was a bit frustrating. I kept myself patient and I’m trying not to lose my temper on the course. I’ve talked about this with my mental coach and I’m starting to see the results,” said the 23-year-old Khan.

Randhawa was rattled by an opening bogey and had to dig deep to keep himself in the title race. At the age of 42, the former Asian Tour number one and eight-time winner hopes to put his experience to good use.

“The young boys these days are good and experienced enough to play under pressure. It’s a young man’s game now. But experience does matter. Hopefully my experience will count but it is tough to chase young people because they have the energy to go for it,” said Randhawa.

Home favourite Kiradech rolled in six birdies for his best round this week to continue his chase for a first victory in 2014.

“I didn’t roll the ball well as I wanted to on the greens but I’m focused on chasing the leader.  I hope to get some early birdies tomorrow to put some pressure on the leader. I cannot make any mistakes if I want to win,” said Kiradech, a two-time Asian Tour winner.

Scores after round 3 of the Chiangmai Golf Classic 2014 being played at the par 72, 7481 Yards Alpine Golf Resort course (a- denotes amateur):