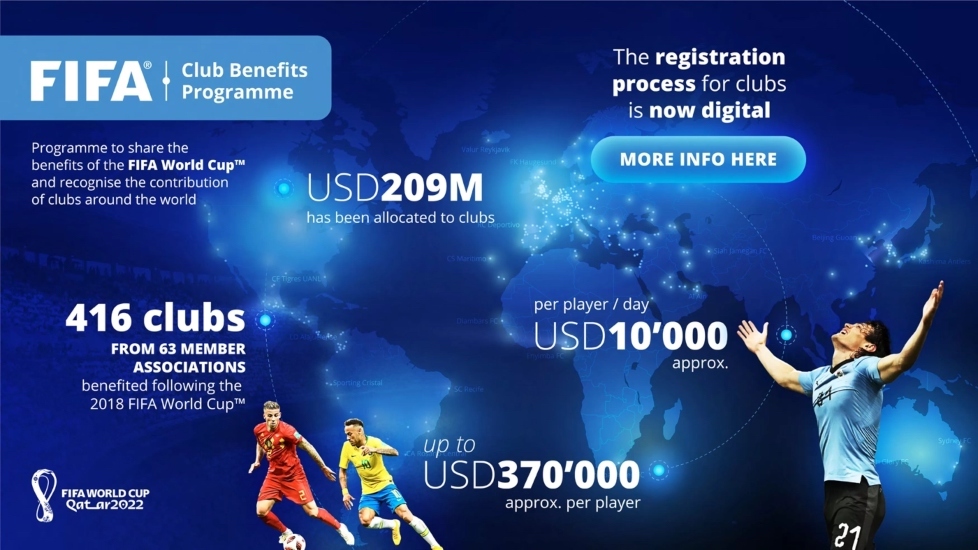 As part of its commitment to recognise the contribution that football clubs make to the successful staging of the FIFA World Cup™, today FIFA started the application process for its Club Benefits Programme which will see USD 209 million distributed to clubs across the world.

For the first time, clubs will be able to apply digitally through the FIFA Professional Football Landscape platform with approximately USD 10,000 to be received for each one of the days the relevant player remains with his national team during the FIFA World Cup 2022™ and the official preparation period.

Amount to be paid out under Club Benefits Programme

Clubs to be compensated for each day players remain in the competition, including the official preparation period

For the first time, clubs to apply digitally via FIFA Professional Football Landscape

The compensation will be paid to all clubs for which the footballer has played in the two years prior to the FIFA World Cup 2022. The Club Benefits Programme is part of a broader collaboration agreement between FIFA and the European Club Association, which was first launched ahead of the 2010 FIFA World Cup™ and further extended in 2015 to cover both the 2018 and 2022 FIFA World Cups™.