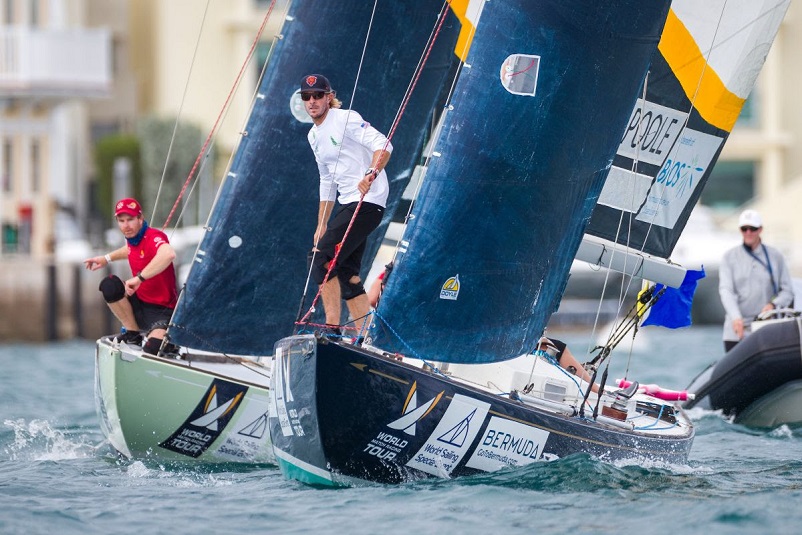 If the conditions on Day 1 of the 70th Bermuda Gold Cup and 2020 Open Match Racing World Championship were spectacular, today they were nearly perfect. What’s the difference? A steadier, stronger breeze more oriented to the length of Hamilton Harbour as opposed to the width.

In a coincidental stroke of symmetry, the group victors were both decided in come-from-behind victories. Poole defeated Robertson in Group A by gaining the lead around the second windward mark. In Group B, Williams snatched the win from Mirsky in a masterful bit of positioning in the final half of the run to the finish.

“I guess we had it but Ian kept the pressure on and we choked a bit,” said Mirsky, “so we’ll learn from it going forward.”

“We’re a little bit disappointed to be honest,” Robertson said. “We had a comfortable lead after the first lap and let him get back into it up the second beat.”

Poole got back into his match versus Robertson by playing the right side of the second upwind leg. He went through the leeward gate nearly two boatlengths behind but saw the wind shifting back to the right and knew that he wasn’t going to get past Robertson by following him up the beat.

“Coming down to the leeward gate (Robertson) was looking to go (around the) right (gate) and we were like, ‘Well we have to split at this point.’ We were looking at the clouds and they were showing pressure shifting back to the more westerly direction since the rain had moved off, so we committed to a left turn. We rounded and came back at him in a good righty, enough to force him back left. At that point we had to dig our heels in for the righty and it came good in the last couple of lengths to the top mark.”

Poole rounded the windward mark with his bow tucked inside Robertson’s leeward quarter. With that position he was able to give Robertson a little luff, enough to allow Poole to peel away for a jibe towards the finish with a nearly two boatlength lead in hand, which he took across the finish line for the group win.

“(Poole) did a nice job to keep it close enough and get back into the game,”said Robertson. “We learned some tough ones there. Dropping our first race in the last match and dropping down to second in our group is a little disappointing, but it’s good to get that kick in the arse to go into the quarters with something behind you.”

Williams has blended speed with positioning brilliantly through the first seven races, and did it again versus Mirsky. He trailed for three-quarters of the match, although never by more than two boatlengths, and then struck when he was able to get his bow inside Mirsky’s transom (left) when both were on starboard jibe heading down the run to the finish.

The next five minutes to the finish happened in a flash. First, Williams got a penalty for luffing too quickly after establishing the overlap. Then Williams luffed again and this time the on-water umpires penalized Mirsky for not keeping clear. With the penalties offset, Williams merely had to hold his position to keep Mirsky outside the pin end. Mirsky aided Williams’s effort by having a lapse in crew work.

“(Williams) did an amazing job as we were both on starboard to swing his bow behind our transom from above us and then hook us,” Mirsky said. “He got a penalty, but had us in a powerful position above the layline to the pin. Then we got a penalty after that in trying to drop our kite and do the big storm of maneouvers to get to the finish.” 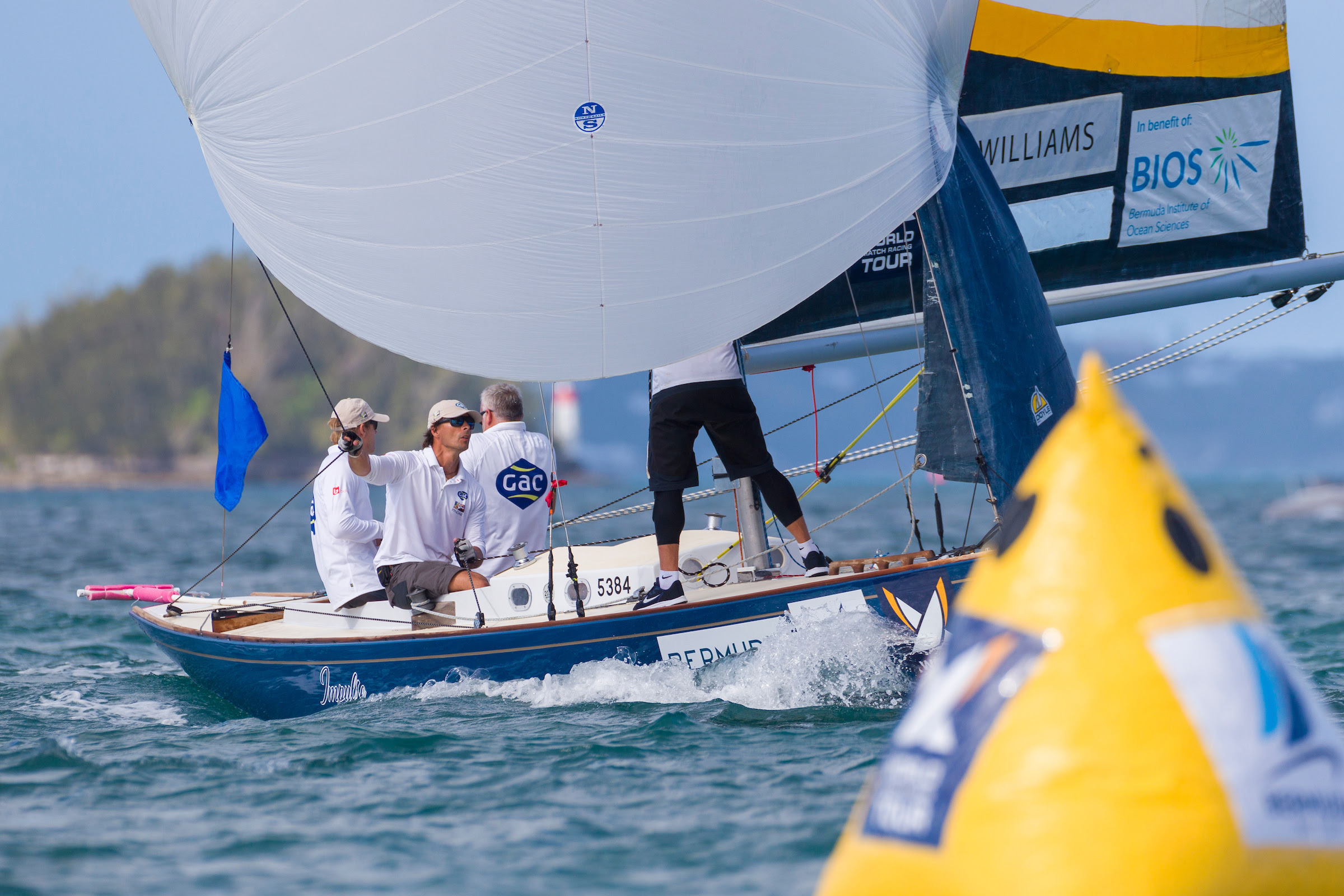 “We rounded top mark right behind (Mirsky) and managed to lengthen up the starboard jibe and get into a situation where we were jibing across his air and trying to get hooked into leeward on starboard,” Williams said. “That’s a great spot to be, and the game from there is to hold him hot and prevent him from getting to the pin end.”

On the flip side of those thrilling matches was the hard-luck day of the Berntsson Racing Team. The Swedish crew finished 1-2 on the day and dropped to fifth place in Group A after losing the “woulda, coulda, shoulda”game. Twice.

Berntsson lost to Robertson when they misread a course change to begin the second lap of their race. Then they lost to Dackhammar when they got penalized for interfering with another match while approaching the finish.

“We got all of our mistakes out of the way in one day,” said the affable Berntsson, who’ll have to forge a path to the quarterfinals through the Repechage Round. “We’ve done it before so it’s nothing new to us.”