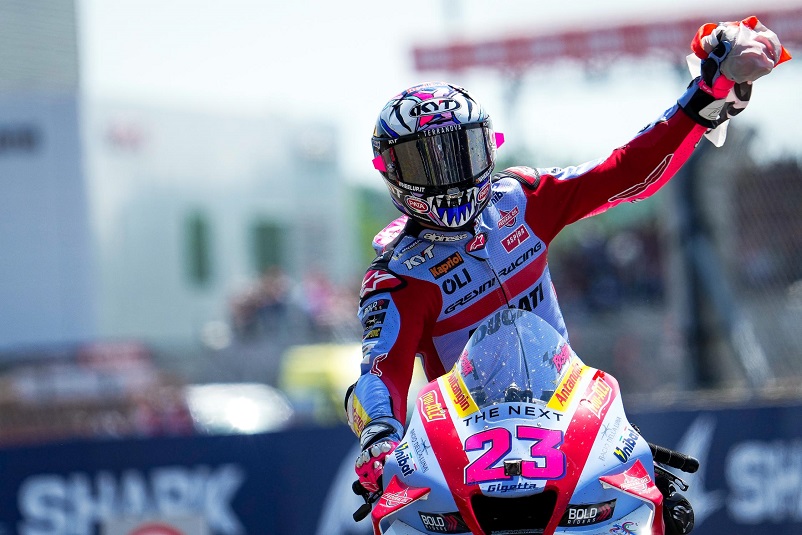 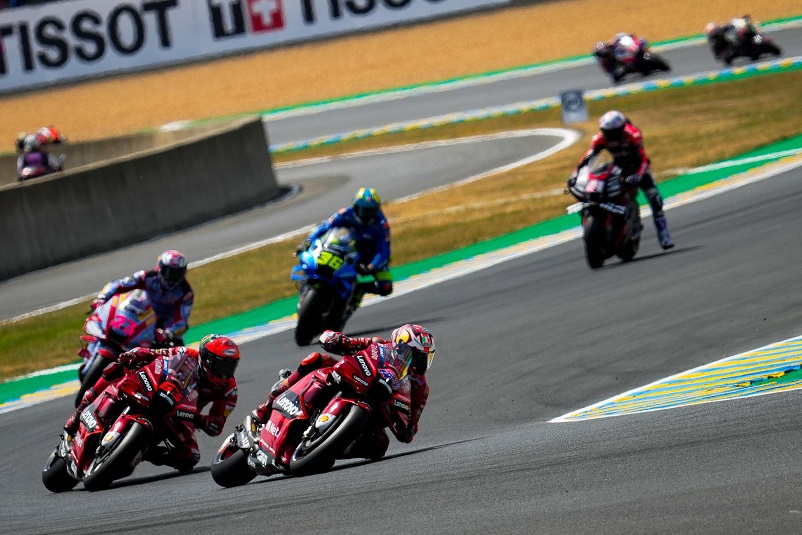 For the third time this season, Enea Bastianini is a MotoGP™ race winner. The Gresini Racing star put in a flawless performance in front of over 110,000 spectators to come out on top of a pulsating SHARK Grand Prix de France. The Beast capitalized on a mistake from long-time race leader Francesco Bagnaia (Ducati Lenovo Team) to take the maximum 25 points, while Jack Miller (Ducati Lenovo Team) celebrated his second podium of the season, with Aprilia’s Aleix Espargaro making it three premier class rostrums on the spin.

Local heroes Fabio Quartararo (Monster Energy Yamaha MotoGP™) and Johann Zarco (Pramac Racing) were unable to mark their home GP with a podium, as they had to settle for fourth and fifth.

The launch from the line

As the lights went out, the atmosphere in the circuit hit fever pitch as riders revved up for the start of Round 7 of 2022. Miller got the perfect launch from the line to take the holeshot ahead of Bastianini, who had fought his way through from the second row. Bagnaia was in third with Suzukis Alex Rins and Joan Mir split by Takaaki Nakagami (LCR Honda Idemitsu) in P5. A poor start from Espargaro saw him drop to seventh, while Quartararo also had a difficult time getting off the line, the Frenchman being swallowed up by a number of riders before he worked his way back up the field.

A wild first lap came to a close with Marc Marquez (Repsol Honda Team) aggressively lunging up the inside of both Quartararo and Nakagami, to move into P7, with the Repsol Honda rider rubbing elbows with his Japanese counterpart.

As the second lap began, Zarco was having an equally difficult start to the GP. The number 5 started ninth after being slapped with a three place grid penalty for a Q2 infraction, and he was locked in a battle mid-pack with Brad Binder (Red Bull KTM Factory Racing), with the two making contact at Turn 6 and the RC16 losing a front wing as a result.

The manic start to proceedings continues back at the front. Bagania and Rins had both picked off Bastianini to drop him out of the podium places, though for the GSX-RR, his race ambitions would come crashing to a halt at the beginning of the third lap. In a scary moment, Rins went off track at Turn 2 and travelled at speed through the gravel before coming back on track at Turn 4, but unfortunately, he couldn’t keep his machine upright as it returned to the tarmac. He temporarily rejoined but retired soon after.

As a result, it was a Ducati one-two-three with the factory riders building up a gap out front. A Miller mistake out front allowed his teammate Bagnaia through on Lap 4, and the race began to settle as riders found their groove. Just outside the podium places, Mir led Espargaro, Quartararo and Marquez.

Further back, Tech3 rookie Remy Gardner crashed out of the race, while three laps later, he would be joined back in the box by teammate Raul Fernandez, compounding a difficult day out for Herve Poncharal’s side.

Bastinaini’s tyre conservation is renowned within the paddock, and coming up to the midway point, it was a matter of when rather than if he would overtake Miller, who was using a soft-soft combination. Eventually, it came on Lap 12, with the Gresini rider going through on the Aussie at Garage Vert.

Soon after, there was some change just behind them, with Mir hitting the deck and tumbling through the gravel at Turn 14 and allowing Espargaro and Quartararo to gain a position each. However, the Aprilia rider still had work to do as he was still 1.1s away from Miller in third. There was also disappointment for Jorge Martin (Pramac Racing) as he recorded a fourth DNF of the year after a Turn 9 fall.

After a settled number of laps, the victory fight sparked into life as Bastianini began to swarm all over the rear end of Bagnaia out front. The pressure began on the 17th lap and continued for five more before The Beast made his first move at the Dunlop Chicane. The two went wheel-to-wheel up until Turn 6, with Bagnaia posting a classy response. The fight wasn’t over though, with Bastianini forcing an error from his Ducati counterpart at Garage Vert, with Pecco running it wide and dropping to P2. That blunder left a second between them and in an effort to reel in the satellite rider, Bagnaia pushed it too hard around the final corner and slid into the gravel and out of the race.

From there, Bastianini just had to keep it steady to bring home his third victory of the year, while Miller was comfortable in second. Attentions switched the remaining podium place, with home fans willing on World Champion Quartararo in the closing laps, but he could never quite get close enough to Espargaro, who put in a calm and composed performance to secure third. 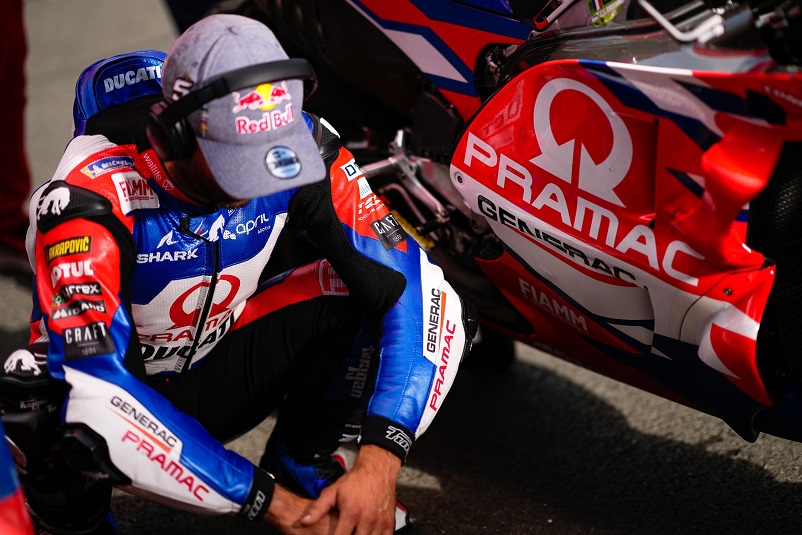 Coming in fifth was Zarco, who displayed some excellent pace throughout, and it looks to be a case of what could have been for the man from Cannes. Marquez rounds out the top six while Nakagami can be pleased with another seventh place finish. Despite missing a wing from the early stages, Binder claimed P8, while his factory teammate Miguel Oliveira (Red Bull KTM Factory Racing) recorded a DNF.

It was certainly a race to remember in Le Mans, with French GP living up the billing in front of a euphoric crowd. Next up for MotoGP™ is the Italian Grand Prix in Mugello, where we’re sure to see even more twists and turns in this fascinating World Championship.