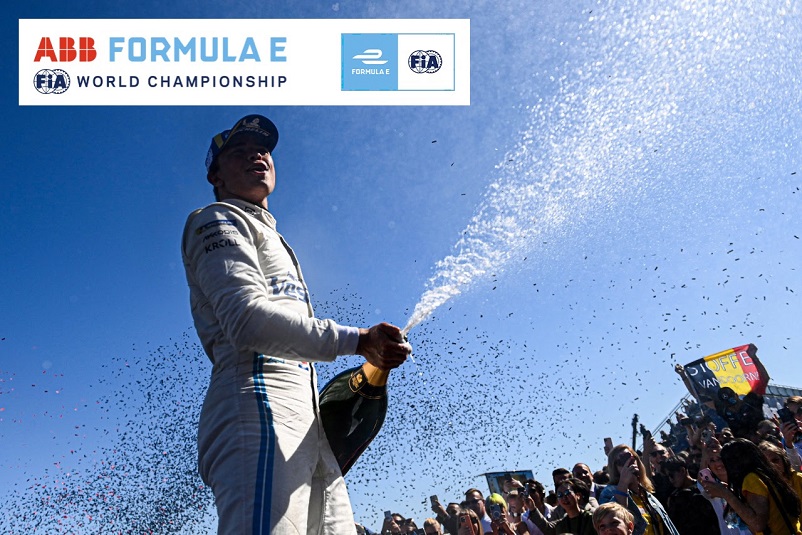 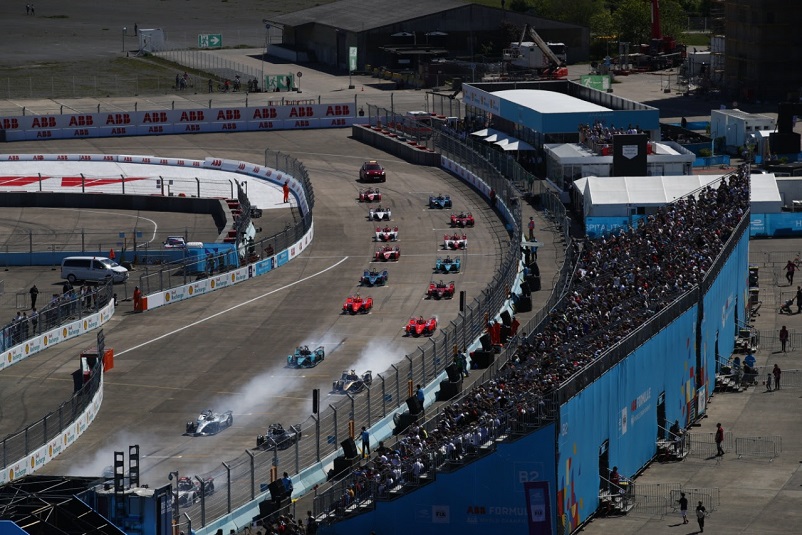 Stoffel Vandoorne stretches his lead in the Drivers’ standings in third

Mercedes-EQ’s Nyck de Vries delivered a supremely controlled drive to win the second race in the 2022 Shell Recharge Berlin E-Prix double-header, heading home ROKiT Venturi Racing’s Edoardo Mortara and Mercedes-EQ teammate Stoffel Vandoorne.
Reigning champion de Vries powered to victory at the Tempelhof Airport circuit, the scene of his Season 7 title triumph, with Mortara following 2.5s back as Saturday’s windy conditions made way for weekend-high temperatures. Vandoorne made it two Mercedes-EQ-run Silver Arrow 02 cars on the podium and three Mercedes-EQ powertrains in the top three.
The Belgian’s third-place finish also extended his silverware streak to three races. Lucas di Grassi (ROKiT Venturi Racing) came home fourth to extend that to four Mercedes-powered cars in the top four in a dominant outing on home soil.
Robin Frijns (Envision Racing) wound up a battling fifth after a race-long back-and-forth between the Dutchman, António Félix da Costa (DS TECHEETAH), who finished in sixth and a gaggle of cars behind all fighting to maximise their points haul as Season 8 passed its half-way stage.
Oliver Rowland (Mahindra Racing) made good progress from 10th at the outset to an eventual seventh – the Yorkshireman running as high as fifth at one stage. TAG Heuer Porsche Formula E Team’s André Lotterer took the chequered flag in eighth position, not quite able to capitalise on practice and qualifying pace. Jean-Éric Vergne crossed the line in ninth, just ahead of fellow title challenger Mitch Evans [Jaguar TCS Racing] who took the final point in 10th.
After eight races and at the halfway point in Season 8 of the ABB FIA Formula E World Championship, Vandoorne is top of the Drivers’ standings running on 111 points, with Mortara moving into second on 99 points and Vergne now third, a further four points back. Mercedes-EQ sit atop the Teams’ standings on 176 points, with ROKiT Venturi Racing next on 148 points.
Round 9 in the biggest-ever 16-race calendar is the Jakarta E-Prix on 4 June, the first time the ABB FIA Formula E World Championship has raced in Indonesia.
NYCK DE VRIES, MERCEDES-EQ FORMULA E TEAM, #17 said: “We have had a difficult ride the past three races, honestly I am just very pleased to be back. I have had a bad time in the past three races, so I am very pleased to come back after a difficult day yesterday. My engineer is always really positive which is nice.
“Of course [I was worried about the driver challenges behind], Edo had been very strong all weekend so we definitely had to keep it clean, but the team managed it very well on their side and I executed it. I am very pleased.”
EDOARDO MORTARA, ROKiT VENTURI RACING, #48 said: “The race was quite good obviously, we are standing here on the podium. But congrats to Nyck and Mercedes, they were having a better pace than us. I was trying to hang with him, but he was definitely quicker in the end. It is still a great weekend for us, two pole positions, a victory yesterday and a second place today.
“It shows that Mercedes are doing things right [with ROKiT Venturi Racing powertrain]. They have a very competitive package, and I am very happy to be driving one of these cars for the last three years.”
STOFFEL VANDOORNE, MERCEDES-EQ FORMULA E TEAM, #5 said: “It was a pretty good race to be honest, a little bit less action than yesterday for me. But nonetheless it is great to be back on the podium, our cars were flying again today and after a tricky qualifying it was important to not lose momentum and to get back to speed in the race. But a double podium this weekend, I am definitely happy with that.
“It felt good [the move on Lucas di Grassi]! Lucas is a tough one to fight, and I had a little more pace than him at that point and managed to pull it off cleanly.”
The guest of honor at the race on Sunday was the Governing Mayor of Berlin and patron of the 2022 Shell Recharge Berlin E-Prix, Franziska Giffey.
She met Formula E Founder and Chairman, Alejandro Agag; Jamie Reigle, Chief Executive Officer, and Alberto Longo, Co-Founder and Chief Championship Officer, and confirmed that Berlin will continue to host Formula E races. “We are delighted that the ABB FIA Formula E World Championship is taking place in our capital for the eighth time. Berlin is the only city that has been on the racing calendar every year since the inaugural season in 2014.”
Mayor Giffey continued: “The iconic Tempelhof Airport is the venue for the event for the seventh time. The track has quickly become one of the most well-known racetracks in Formula E and I am therefore delighted that it has been contractually secured that the ABB FIA Formula E World Championship will also take place on the Tempelhof site for the next two years.“
During the grid walk and a visit to the pits of the TAG Heuer Porsche Formula E Team, Mayor Giffey was able to see the technology of the all-electric racing series. “Formula E not only offers us exciting electric racing, but is also an important platform to promote technological and sustainable innovations that can facilitate our transition to a greener and electric future,” she said.