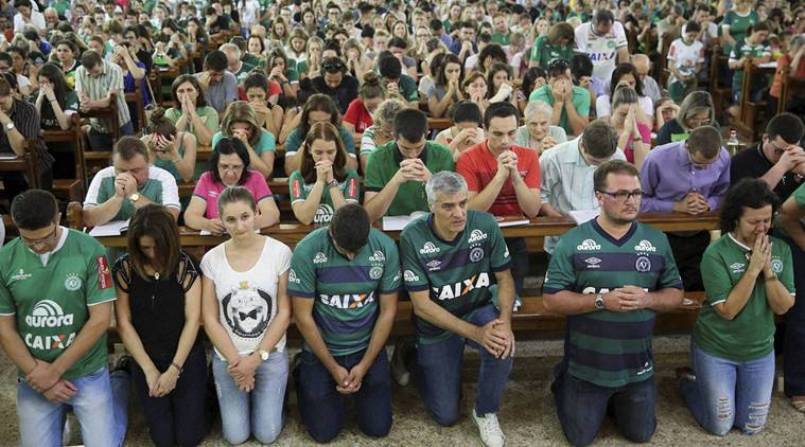 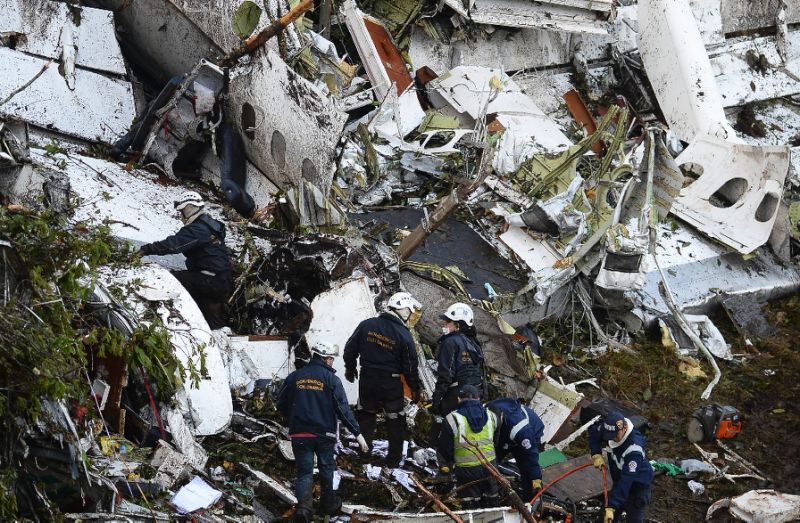 Emotional tributes were paid Wednesday to the Brazilian football team Chapecoense Real that was virtually wiped out in a plane crash in the Colombian mountains that killed 71 people.

The charter plane, a British Aerospace 146, reported electrical problems just before the crash as it arrived in Medellin where Chapecoense were to play in the Copa Sudamericana final.

But a Colombian military source said the airliner may have run out of fuel. “It is very suspicious that despite the impact there was no explosion. That reinforces the theory of the lack of fuel,” the source told AFP.

The weather at the time of the disaster was bad.

Two flight crew and a journalist following Chapecoense for the game against Medellin also escaped.

Brazil ordered three days of national mourning for the team.

Fans flocked to the Chapecoense stadium in Brazil to mourn the team, who have emerged from nowhere over the past two years to take South American football by storm.

Other Brazilian clubs have offered them players so they can carry on competing. Special funds have also been set up.

Ronaldo joined Real Madrid teammates in a minute’s silence for the Brazilian team.

“The pain is terrible. Just as we had made it, I will not say to the top, but to have national prominence, a tragedy like this happens,” club vice-president Ivan Tozzo told Globo SporTV.

“It is very difficult, a very great tragedy.”

The plane went down about 50 kilometers (30 miles) from Medellin, in a remote mountain area called Cerro Gordo.

Chapecoense were on their way to play Atletico Nacional of Medellin in the first leg of the Copa Sudamericana final.

The two black box recorders have been found but no immediate details were given.

The dead included most of the team and 20 Brazilian journalists traveling to cover the match.

Four people did not turn up for the flight including a journalist and two politicians.

“It’s one of those things in life. Only God knows why I ended up staying behind,” said Luciano Buligon, the mayor of Chapeco in southern Brazil.

Crying, Plinio Filho, the head of the club’s advisory council, recalled the players telling him they were off to “chase a dream” as they left.

“The group was like a family. It was a group of friends, where everyone laughed a lot, even in defeat,” he said.

Footage of the club on the plane before take-off aired on TV channel Gigavision in Bolivia, where the team departed from the city of Santa Cruz after taking a commercial flight from Brazil.

The same plane was used two weeks ago to fly the Argentine national team with Messi on board to San Juan, Argentina for a World Cup qualifying match, specialist websites said.

Chapecoense coach Mauro Stumpf told Gigavision he hoped the plane would “bring (us) luck” like it did when the team flew with the same company to a quarter-final match last month.

The British Aerospace 146 airliner entered into operation in 1999 and previously belonged to two other airlines, a spokesman for the manufacturer told AFP.

Britain’s Air Accidents Investigation Branch said it was sending experts along with representatives of the plane’s manufacturer BAE Systems to Colombia to help the investigation.

Rescuers found a scene of devastation when they came across the plane.

“We found ourselves faced with a disastrous scene. The plane was completely destroyed,” fire service captain Elkin Gonzalez told AFP.

The six survivors were recovering in hospital.

His last-minute save in the semi-final had sealed the team’s place in the Copa Sudamericana final.

The journalists killed included six employees from the Brazilian affiliate of Fox Sports television. One of them, Mario Sergio, was a well-known announcer and former Brazilian international player.

The cup final first leg had been scheduled for Wednesday.

In an emotional gesture, Colombia’s Atletico Nacional called for Chapecoense to be awarded the cup.

After decades in the lower divisions, Chapecoense returned to Brazil’s top-flight Serie A in 2014 for the first time since 1979.

“We have moved from a dream to a true nightmare,” said Buligon, the mayor. – Agence France-Presse