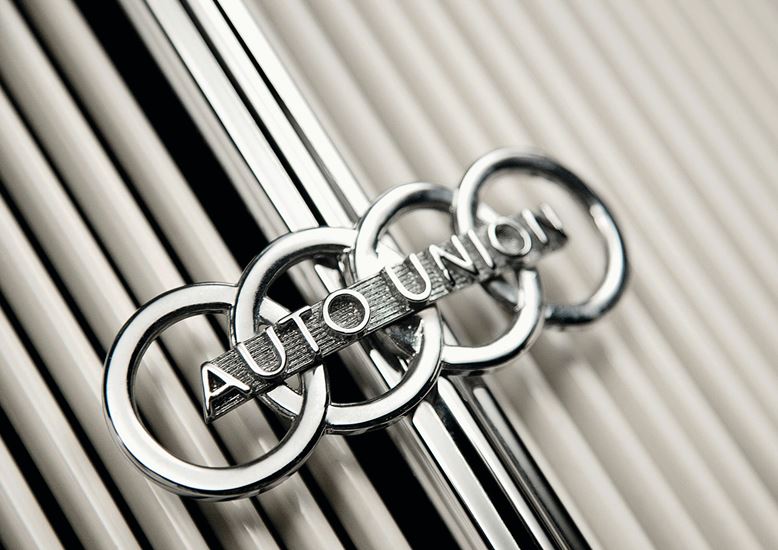 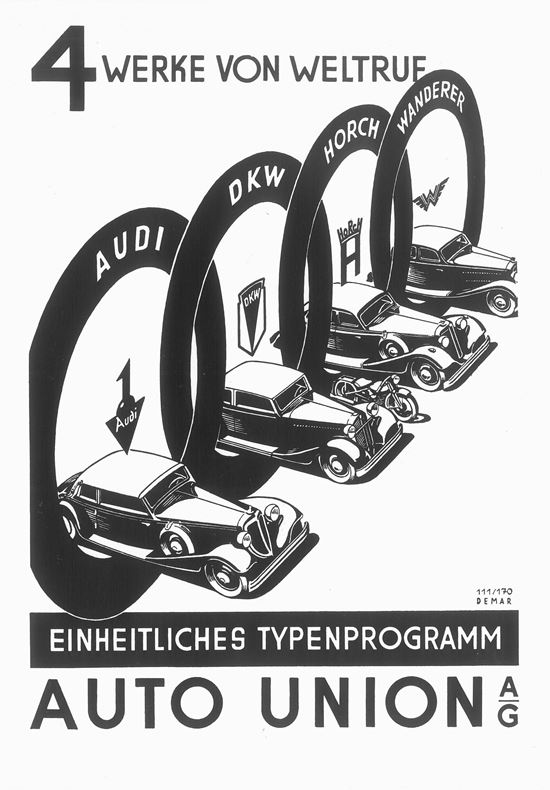 This year the Audi Four Rings logo celebrates its 90th birthday. Everyone who would like to learn more is invited by Audi Tradition to the presentation at the Audi museum mobile. On Thursday December 8th, Professor Sebastian Mock, from Vienna, and Audi historian Ralf Friese will have quite a few stories to tell about the history of Auto Union AG. Please register in advance; admission is free.
On June 29, 1932, on the initiative of the State Bank of Saxony, the former Audiwerke AG, Horchwerke AG, and Zschopauer Motorenwerke J. S. Rasmussen AG (DKW) companies merge to form Auto Union AG. The new entity simultaneously concludes an agreement with Wanderer Werke AG on the purchase and lease of Wanderer’s automotive division.
The new group is based in Chemnitz, with administration located at the DKW plant in Zschopau until 1936. Following its creation, Auto Union AG is the second-largest motor vehicle group in Germany. The company logo shows four interlocking rings, representing the inseparable unity of the four founding companies.
The brand names Audi, DKW, Horch, and Wanderer are retained. Each of the group’s four brands is assigned a specific market segment: While DKW is active in the motorcycle and small cars segment and Wanderer builds and sells mid-size cars, Audi markets cars in the deluxe mid-size segment and Horch stands for luxury cars at the top end of the market.
A new beginning – the Four Rings in Bavaria
While Sebastian Mock, Full Professor for Civil and Corporate Law at the Vienna University of Economics and Business, will examine the consequences of the Great Depression for the German automobile industry and the associated challenges during the foundation of Auto Union AG, Audi historian Ralf Friese will concentrate on the new beginning in Ingolstadt.
In 1945, after the end of the Second World War, Auto Union AG, located in the Soviet Occupation Zone, is expropriated. Its factories are dismantled and in 1948 the company is removed from the commercial register of the City of Chemnitz. At the end of 1945, senior Auto Union employees initially establish a depot for Auto Union spare parts in the garrison town Ingolstadt.
On September 3, 1949, this becomes Auto Union GmbH, which in the same year begins producing delivery trucks and motorcycles. Tumultuous decades follow, until finally in the 1980s the Audi brand begins to find a more premium position on the market.
In this context, the “Vorsprung durch Technik” is accompanied by developments such as quattro, TDI, aerodynamics in body development and consistent lightweight construction, since 1985 the product and the company have the same name.
With the recent redesign of the Four Rings as part of the introduction of the new Audi Q8 e-tron, Audi shows that the brand and its logo can continue to reinvent themselves, even after 90 years.