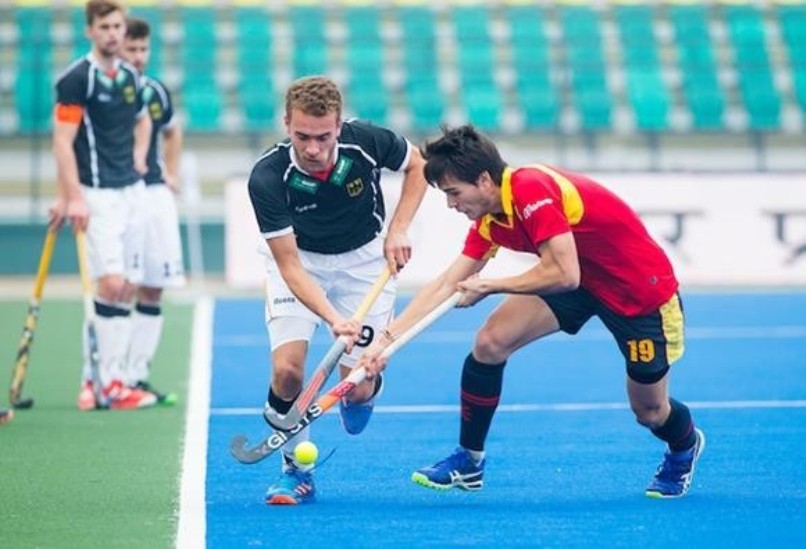 There were wins for New Zealand, Germany, England and host nation India on an entertaining opening day of the Uttar Pradesh Hockey Junior World Cup Men 2016 in Lucknow.
The day’s action began in Pool C, with New Zealand battling to a hard earned 1-0 win over Japan. The New Zealanders scored the only goal of the game in the 55th minute, with Oliver Logan finding the target with a well taken drag-flick.
The Japanese came close on numerous occasions in the latter stages, but the junior Black Sticks held on to make a winning start to their competition. “To absorb that much pressure was pretty good for us,” said New Zealand’s David Brydon. “Normally we’d be leaking a few so to keep a clean sheet is awesome.”

Reigning champions Germany also made a winning start to their title challenge, but were made to work hard by an organised Spain. Anton Boekel’s 25th minute strike was cancelled out by Spain’s Manual Bordas I Fabregas in the 48th minute, but German Olympian Timm Herzbruch scored seven minutes from the end to give his team all three points.

The second part of the day saw attention switch to Pool D, where England claimed a 4-2 win over South Africa. Edward Horler scored two near identical penalty corner efforts in the 5th and 9th minutes before Peter Scott made it 3-0 two minutes later.

A fine solo goal from Matthew de Sousa reduced the deficit in the 13th minute and things got very interesting when Ryan Crowe made it 3-2 with 14 minutes remaining. However, Jonty Griffiths’ fine strike from the top of the circle sealed the win for England.
Following an energetic and colourful opening ceremony, India and Canada took to the field to contest the final match of the day.  India delighted the noisy home fans with a high-quality performance, winning 4-0 thanks to goals from Mandeep Singh, Harmanpreet Singh Varun Kumar and Ajit Panday all on target. The Canadians were resilient in the first half, but India took control of the second period and were deserving winners.

The opening ceremony and the match was watched by Canadian High Commissioner Nadir Patel, who said: “Canadians love sports and as a proud Canadian, I am thrilled to be here to witness the game and cheer for our national team.  Canada has always cherished its friendship with India and opportunities like these in the arena of sports reiterates the vibrant relationship that both countries share.”

Tickets for the event, which is taking place from 8-18 December, are on sale and can be purchased by clicking here.
Fans can find scores, standings, fixtures, photos, videos and more via the official event website on FIH.ch as well as through FIH Twitter, Facebook and Instagram using the hashtags #HJWC2016 and #RockTheJuniors.
RESULTS
Pool C: New Zealand 1, Japan 0; Germany 2, Spain 1.
Pool D: England 4, South Africa 2; India 4, Canada 0.