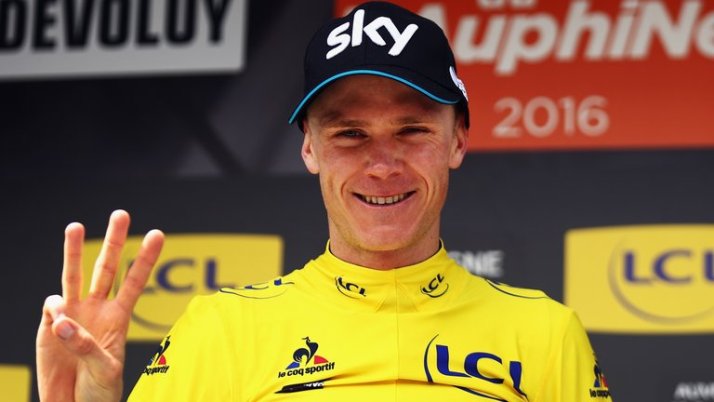 Chris Froome held on to win the Criterium du Dauphine for the third time as fellow Briton Stephen Cummings won the seventh and final stage on Sunday.

The two previous times Froome won the Dauphine, he went on to claim Tour de France glory a month later.

“It’s a massive satisfaction to win the Dauphine for the third time,” said Froome, who held up three fingers on the winner’s podium.

“This is a great time for me to have a win under the belt. It’s a boost of confidence ahead of the Tour de France but there’s still some work to do before July.

“I’m not at my best yet. I hope to reach that by the start of the Tour de France. I’ve not raced much this year in order to be at my best during the third week of the Tour,” added Froome ominously for his rivals.

The 31-year-old had to survive some nervous moments in the final 15km of Sunday’s 151km run from Le-Pont-de-Claix to Superdevoluy as Spaniard Alberto Contador launched several accelerations on the penultimate climb.

Frenchman Romain Bardet also tried his chances on a rapid descent between the final two climbs but Froome doggedly chased down every attack.

He finished 12 seconds clear of Bardet with Ireland’s Dan Martin third at 19sec.

Australian Richie Porte was fourth at 21sec with Contador, himself a two-time Tour winner, settling for fifth at 35sec.

Cummings, 35, who won a memorable stage at last year’s Tour, outwitting French pair Bardet and Thibaut Pinot in a dramatic finish, was the last of a 20-man breakaway group to wilt and finished 3min 58sec clear of the chasing pack.

It completed a fantastic race for Cummings’s African Team Dimension Data as they won two stages and both the green points and polkadot king of the mountains jerseys through Norway’s Edvald Boasson Hagen and Daniel Teklehaimanot of Eritrea respectively.

“This is the day I picked out before the race. I was just thinking that going in the break was good training for the Tour de France but I also knew that there wouldn’t be many riders left and that the favourites would watch each other,” said Cummings, who matched Boasson Hagen’s victory from stage four.

Martin won the sprint for second with Bardet third, moving both up a place in the overall standings thanks to the bonus points available on the line.

Tasmanian Porte, who started the day second, was caught out in the uphill sprint finish and lost two places.

When Martin launched his sprint for the line, Porte was inadvertently blocked in by his former teammates at Sky and even bumped into Froome.

“I feel sorry for him but he’s in fantastic form ahead of July. He’ll be one of the main contenders at the Tour too,” said Froome of his close friend Porte. – Agence France-Presse