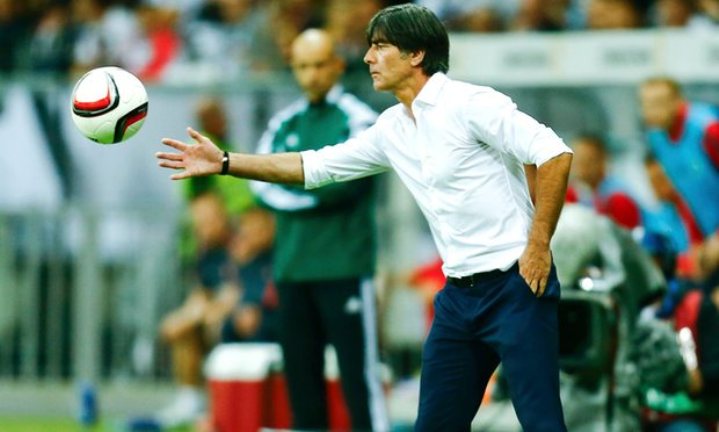 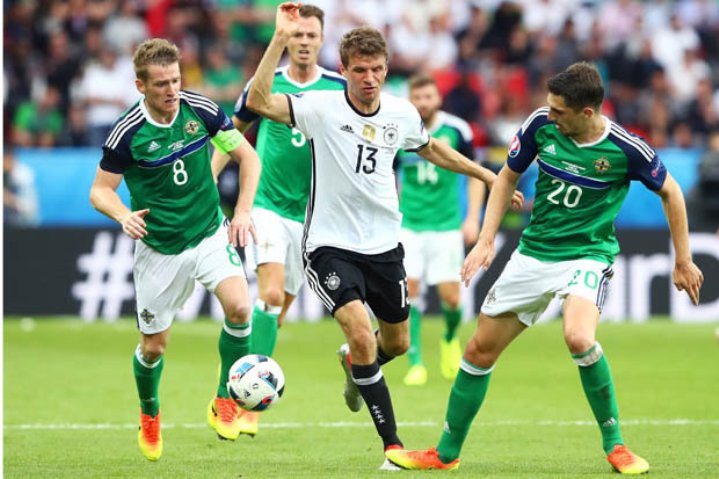 Germany have built a reputation as a tournament team under Joachim Loew and two below-par years since their World Cup triumph, he is relishing the business end of Euro 2016.

After a flattering scoreline in the 2-0 win over Ukraine and an unimpressive goalless draw with Poland, Germany booked their last 16 berth with a 1-0 win over Northern Ireland.

Now comes the moment of truth for Loew’s Germany.

They face Slovakia in Lille on Sunday and, should they advance, their Euro 2016 title credentials will be put to the test against Italy or Spain in the quarter-finals.

As any Germany fan knows, die Mannschaft have never beaten Italy at either a World Cup or European Championship finals in eight attempts.

The feeling back in Berlin is that the German team and head coach Loew have rested on their laurels since Brazil 2014.

Two years after right-back Philipp Lahm and striker Miroslav Klose retired, Loew has yet to settle on full-time replacements.

Loew, Mario Goetze and Thomas Mueller have all bitten back at thinly-veiled criticism from the German media in press conferences in France.

Michael Ballack, Loew’s captain at Euro 2008 when they lost the final to Spain, has been the loudest critic of Loew’s side.

In a newspaper column, the ex-Chelsea star described the goalless draw against Poland as a “wake-up call at the right time” adding “you can’t say everything’s rosy”.

“It’s good that there is a discussion in Germany whether this team has the character to sometimes win ugly,” wrote the 39-year-old.

Germany had the world at their feet when Goetze’s volley sealed their fourth World Cup title at the iconic Maracana stadium.

The performance in the Rio de Janeiro final cemented coach Loew’s status as a national treasure and made his players heroes in football-mad Germany.

While Germany left golden memories in Brazil, they forgot to bring their eye-catching brand of attacking football back home with them.

From the dizzy heights of their 1-0 win over Argentina, Germany crashed back down to earth with away defeats to Poland and the Republic of Ireland in Euro 2016 qualifiers.

They also threw away a two-goal lead in a 3-2 friendly defeat to England in Berlin in March.

Now Loew must prove his side can still cut the mustard on the big stage.

They face Slovakia having lost 3-1 to Jan Kozak’s side in a May friendly in Augsburg.

“We lost to Slovakia at the end of May, so we know what’s coming,” said Loew, who fielded an inexperienced side for the friendly.

“From now on, opponents are going to have to do something or they know they’ll be going home.

“It’s one of the reasons I’m looking forward to the knockout stages.”

But Loew has a few issues to address.

Captain Bastian Schweinsteiger is waiting in the wings and has yet to start in France after a knee injury.

Finishing is a problem too as Germany converted just one of their 29 chances against Northern Ireland.

Forwards Goetze and Thomas Mueller have yet to get on the scoresheet.

Ex-international Christoph Metzelder says Goetze is showing signs of what he can do after a season spent mainly on the bench at Bayern Munich.

“Mario has improved after three games, he has rhythm and confidence, so I think he should keep his place,” Metzelder told SID, an AFP subsidiary.

But the inclusion of Gomez, the match-winner against Northern Ireland, is seen as a step back.

Many pundits see the burly striker as ill-suited to Germany’s fast-footed attack.

“Gomez was very dangerous in the penalty area, but I don’t know if he is the long-term solution,” said ex-Germany goalkeeper Jens Lehmann.

Loew will celebrate a decade in charge after Euro 2016 and under his guidance, Germany have always reached at least the last four at major tournaments.

Criticism from pundits and former players is water off a duck’s back to the 56-year-old.

“Nothing surprises me anymore,” Loew has said on the subject of whether Germany have the mettle and leadership to reach the later stages in France.

“I read something from a former leading player and it conjures up a smile on my face.

“In 2014, we already had the same discussion. Then we won the World Cup and suddenly everyone was an awesome leader.

“In all honesty, it’s all been said before.”