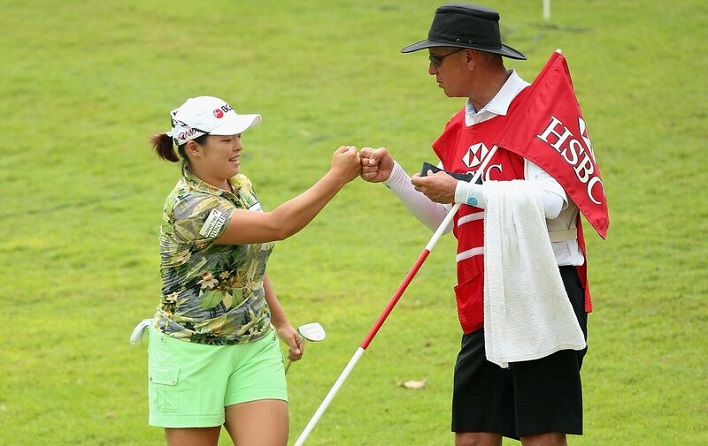 South Korea’s Ha Na Jang carded a superb second round 6-under 66 to join fellow country woman Mirim Lee at the top of the leader board of the HSBC Women’s Champion 2016 at 8-under par on aggregate.

The 23-year-old Jang enjoyed a bogey-free round in windy and, at times, damp conditions that saw four birdies and an eagle (hole 7), her second in two days.  The nine-time tour champion has had a fantastic start to the season, which has carried through to the prestigious Sentosa tournament. She said:

“First round and second round, two eagles, so I feel very comfortable. I was saying to myself not to do too much thinking and just be patient. A lot of birdies, two more days, keep concentrating, I can do it!”

Like Jang, Lee also sailed through the Serapong course today without a single bogey on her card. For the 25-year-old six-time tour winner, it was a case of keeping it simple:

Thailand’s Pornanong Phatlum and Suzann Pettersen of Norway lie one shot off the lead at 7-under par after rounds of 67 and 69 respectively. One shot further back and tied in fifth place at 6-under par are Amy Yang (Korea), Gerina Piller (USA), Sun-Ju Ahn (Korea) and Shanshan Feng (China).

Defending champion Inbee Park made a slow start with three bogeys in the first four holes but recovered somewhat to close the round at one-over while world No.1 Lydia Ko also fell to the curse of the first with a double-bogey, which the 18-year-old never really recovered from. Park is tucked in at tied-20th while Ko has slipped to tied-41st at the half way mark.

Singapore’s lone representative Koh Sock Hwee improved on her first round effort with a 1-over 73 that included five birdies. She commented:

“I felt a little shaky at the start but told myself to stay patient. I made five birdies today, which I am very happy about.”

The HSBC Women’s Champions is a four-day festival offering the best in golf, music and food.  British pop band Take That will perform live in Singapore for the first time in over two decades, with a one-off concert on Saturday while Electronic Dance Music DJ Jack Novak from the US joins local DJ talents – DJ FARZ and DJ Li.A – to spin for fans at the end of each day’s play.

Celebrity chef Monica Galetti headlines the culinary element of the four-day festival. Visitors to the HSBC Women’s Champions will be amongst the first in Asia to sample the Samoa-born Galetti’s critically acclaimed dishes. A limited number of tickets are still available. Please visit www.sistic.com.sg/events/hsbc0316 for further details.