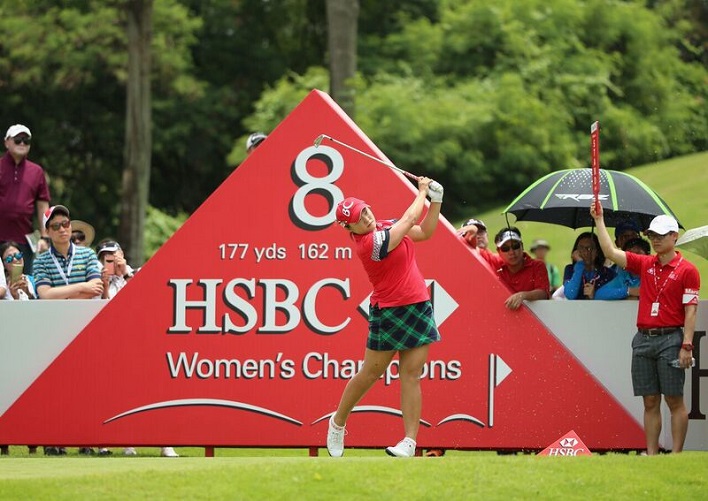 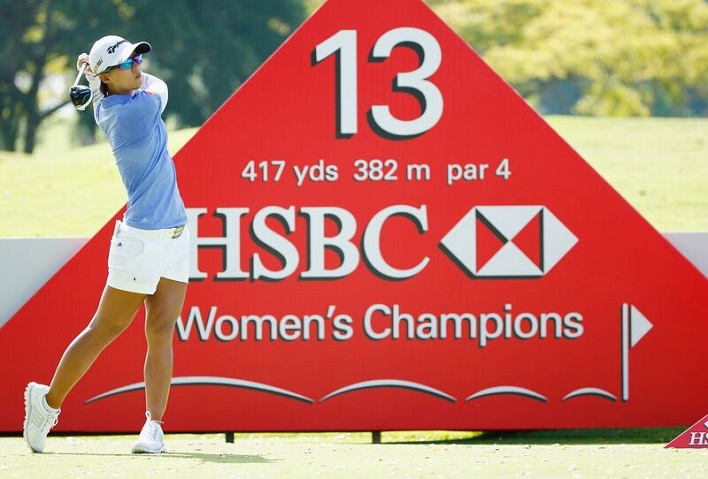 Joint overnight leader Ha Na Jang of South Korea has a slender one-shot lead over Thailand’s Pornanong Phatlum to top the leader-board after round three of the HSBC Women’s Champions at Sentosa Golf Club.

Played in slightly overcast but hot conditions, the 23-year-old shot a bogey-free round of 68, including two birdies either side of the turn, to finish at 12-under par on aggregate. Speaking after her round, Jang, whose sole LPGA Tour victory came in last month’s Coates Golf Championship, said:

“I missed a few greens yesterday but today just one miss which is really fantastic. Tomorrow I’ll just try to enjoy the game because Pornanong is a good friend. We’re really close. Just keep it simple, same as every day, not too much thinking because I know how to play and score, just keep it simple.”

By contrast, Phatlum played an aggressive round that saw her make two bogeys and six birdies, including an all-important birdie on the 18th, to put real pressure on the leader. Still without a win in her seventh year on tour, this could be the popular Thai’s best chance yet.  Said Phatlum:

“Today my short game was very good. Maybe tomorrow I have to prepare myself mentally before going out on the course. Have to be ready, and don’t think too much. I’m confident for tomorrow.”

One shot further back at 10-under par are joint overnight leader Mirim Lee of South Korea and compatriot Amy Yang.

The low round of the day went to Thailand’s Ariya Jutanugarn who carded a 6-under par 66 to finish in fifth place alongside Brooke Henderson, Stacy Lewis, Chella Choi, Na Yeon Choi and Suzann Pettersen at 8-under par.

After two difficult days on course, World No.1 Lydia Ko found her form in round three, shooting a bogey-free round of 5-under par 67. But tied in 20th place and eight shots off the lead, the New Zealander has almost certainly left herself with too much to do on the final day. Asked what her game plan is for tomorrow, Ko said:

“Hopefully I’ll continue the good rhythm from today. It was good to play alongside two good players like Mi Hyang and Cristie, especially Cristie, she was playing well, and she’s a good person to kind of feed off because she’s putting well every single round I’ve played with her.”

“Hopefully we’ll have a similar grouping. Just give myself a lot of opportunities. Some of the holes out there are tough, so I’ve just got to play smart golf, but then when I have the birdie opportunities, grab them!” continued Ko.

Ko Sock Hwee continues to fly the flag for Singapore producing another respectable round, carding two-over par 74 to finish round three tied in 58th place among the 62 competitors.

The HSBC Women’s Champions is a four-day festival offering the best in golf, music and food.  British pop band Take That perform live on Saturday night, while celebrity chef Monica Galetti headlines the culinary element of the four-day festival with a pop up food both in the HSBC Chill Zone.

With a closely contested leader board, round four promises spectators a thrilling finish on Sunday.

For more information on the HSBC Women’s Champions 2016, visit the tournament website at http://www.hsbcgolf.com/womens orwww.facebook.com/hsbcwomenschampions