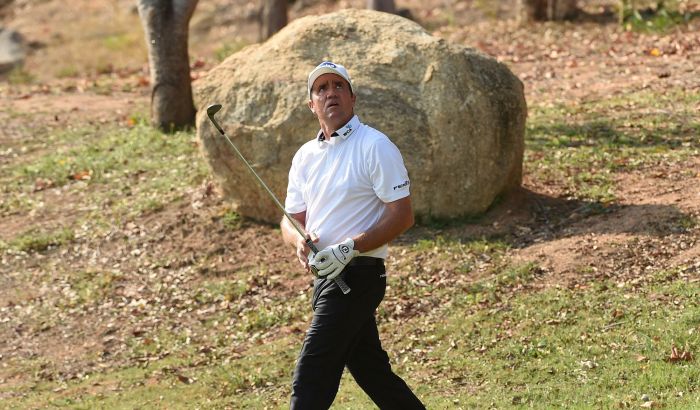 Australian Scott Hend birdied two of his closing four holes to open up a two-shot lead after a wind-swept third round at the True Thailand Classic presented by Chang on Saturday.

Chasing an eighth Asian Tour victory, big-hitting Hend battled to a two-under-par 70 at the Black Mountain Golf Club to lead from American Peter Uihlein, who came home in 69 at the US$1.75 million event sanctioned by the Asian Tour and European Tour.

Thomas Pieters of Belgium shot the day’s best of 66 to lie three back of Hend, who was also the third round leader in the inaugural edition before finishing joint runner-up last year.

Co-overnight leader Pelle Edberg of Sweden made two closing birdies to salvage a 73 to lie alongside Pieters while Thai duo Prom Meesawat (69) and Panuphol PIttayarat (74) ended the day in joint eighth place, five off the pace.

Swirly winds kept the leaders bunched together for much of the day before big-hitting Hend brilliantly chipped in from the fringe for birdie on 15 before setting up another easy birdie on 17 by using his length to great effect where he nearly drove the green.

“The winds were a bit tricky, but I had low energy. Getting old, it just catches up sooner or later. You always have a bad body week. If you deal with it well, you get away with it,” said the 42-year-old, who struggled in the World Golf Championships in the U.S. last week where he was 22-over-par.

“It’s just another round of golf for me tomorrow. We practice for a result, we practice to try and get a win. If you’re not in this position, you get upset with yourself. When you’re actually here, you’ve got to try to enjoy it and embrace it. It’s not very often you get a chance to lead a tournament on a Saturday night, let alone on a Sunday.”

First day leader Uihlein, who has finished top-10 in his last two starts, bounced back from sickness with four birdies on the card in his bid for a second European Tour victory.

“It was tough out there but fun. I was pleased with how the day went and how I handled it mentally. I holed some nice putts out there,” said the former world amateur number one golfer. “I feel like each time I am in this potion, I get more comfortable and more confident. I’ll tell you what … you would rather be in that position all the time instead of not having it all year.”

The 24-year-old Pieters, who won twice in Europe last season, nearly withdrew from the start of the True Thailand Classic after battling with a bout of fever but found himself contending following a bogey-free card.

“I was very sick last week … still on antibiotics. I’m feeling better day by day, should be fine tomorrow,” he said. “In the last half a year, my driver hasn’t been as accurate as I want it to be but this week, it’s been like on automatic pilot. I’ve been finding fairways and it’s going long which helps on this golf course.”

Home town hero Prom, a two-time Asian Tour winner, knows he needs to produce a special round on Sunday to emerge victorious. He is counting on his putter to strike it hot at Black Mountain.

“My round was very good although I still missed putts on 16 and 17,” said the burly Prom who notched three birdies against no bogeys. “Still in contention but I’m going to play my own game tomorrow. That’s the key on this course. I’m still in with a chance.”

Scores after round 3 of the True Thailand Classic presented by Chang 2016 being played at the par 72, 7,492 Yards Black Mountain course (am – denotes amateur):