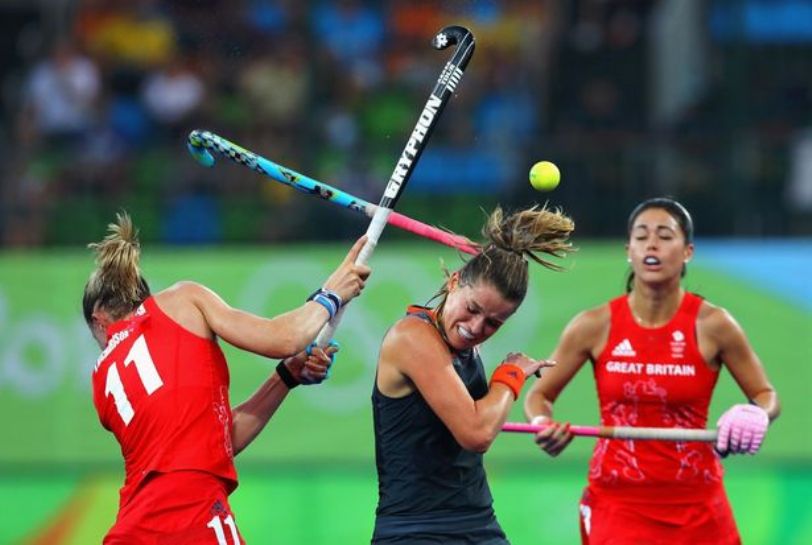 Great Britain women have won the Olympic gold medal for the first time in their history thanks to a stunning shoot-out triumph over the Netherlands, while Germany defeated New Zealand to take bronze on a dramatic final day at the Deodoro Hockey Centre.

GB goalkeeper Maddie Hinch was the heroine for Team GB, making numerous key saves in the match before keeping a clean-sheet in the shoot-out as she played a starring role to help her team achieve a moment of sporting history.
The result ended the Dutch quest for a third successive Olympic gold medal, following their victories at the Beijing 2008 and London 2012 Olympic Games.
The match itself – watched by a huge crowd packed full of Dutch and British fans – was certainly not short of drama, with Hinch providing early evidence of the pivotal role she would play by saving a penalty stroke from legendary Netherlands captain Maartje Paumen before Lily Owsley gave Great Britain (FIH Hero World Ranking: 7) a first quarter lead.
The Netherlands (WR: 1) were almost totally dominant in the second period, levelling the scores within a minute of the restart when 2015 FIH Hockey Stars Player of the Year Lidewij Welten supplied Kitty van Male who made no mistake with a sensational backhand strike into the roof of the net.
Although Hinch continued to deny the Dutch at regular intervals and Naomi van As rattled the cross-bar, the Dutch eventually netted again when drag-flick expert Paumen producing a rare strike from a penalty corner to give her team a 2-1 lead.
Remarkably, Great Britain hit back almost immediately when Crista Cullen slapped home from open play just before half time, but the Dutch continued to control the game in the third quarter, launching wave after wave of high paced attacks before making it 3-2 thanks to Van Male’s second of the game.
The Netherlands continued to dominate in the fourth and final quarter, but it was the gritty Brits who tied the scores when Nicola White bundled home a penalty corner to take the match into a shoot-out where Great Britain shot-stopper Hinch came into her own.
Hinch – who also starred in last year’s shoot-out victory over the Netherlands in the final of the Unibet EuroHockey Championships in London – made saves from Willemijn Bos, Ellen Hoog and Laurien Leurink before Margot van Geffen crashed her effort against the post with Great Britain leading 1-0.
Van Geffen’s miss meant that if Holly Webb scored, Great Britain would be the Olympic champions for the first time in their history. Webb made no mistake, keeping a cool head to fire past Netherlands goalkeeper Joyce Sombroek to give Team GB an incredible victory against all the odds.
In the bronze medal match, Germany (WR: 9) were forced to soaked up huge amounts of pressure from New Zealand (WR: 4) for most of the first two periods and into the early stages of the third before taking a shock lead in the 34th minute. 21-year-old attacker Charlotte Stapenhorst was the scorer, forcing home from close range after a brilliant passing move ripped open the Black Sticks back-line.
Die Danas added to their lead four minutes later with another fine attack, with Lisa Schütze showing the killer instinct in front of goal that the dominant New Zealanders appeared to be sadly lacking. Olivia Merry pulled the Black Sticks back into it when she forced home a penalty corner resulting in even more sustained pressure on the Germany backline, but a virtually flawless defensive performance ensured that the Europeans claimed their first Olympic medal since winning gold at Athens 2004.
It was a painful defeat for New Zealand, who lost the bronze medal match for the second Games in succession.
“It’s unbelievable, I think it’s a dream come true for us”, said Germany’s Lisa Altenburg, who claimed bronze one day after husband Valentin Altenburg coached Germany’s men to the same prize. “We worked so hard and a few years ago no one would expect that we could win the bronze medal. This is overwhelming.”
The women’s medal matches brought the curtain down on a wonderful two weeks of world class hockey that was both thrilling and utterly unpredictable. Along with Argentina’s success in the men’s competition on Thursday (18 August), Great Britain’s victory means that both Olympic hockey gold medals have gone to first time winners.
Complete information about the hockey competitions at the Rio 2016 Olympic Games can be found on the official website: rio2016.com/en/hockey.
Rio 2016 Olympic Games Hockey (men) – Day 14
Results
Bronze Medal Match
Germany 2, New Zealand 1.
Gold Medal Match
Netherlands 3, Great Britain 3 (0-2 SO)
Final standings
Gold: Great Britain
Silver: Netherlands
Bronze: Germany
4: New Zealand
5: USA
6: Australia
7: Argentina
8: Spain
9: China
10: Japan
11: Korea
12: India