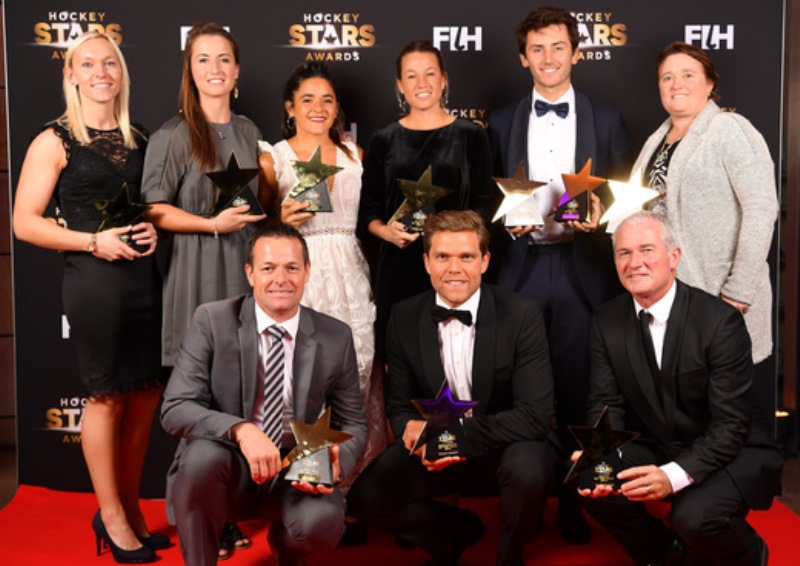 The International Hockey Federation (FIH) has revealed the 2017 Hockey Stars Awards winners, recognising the sport’s top performers from last year at a glitzy event at stilwerk in Berlin, Germany.
Argentina’s Delfina Merino was voted 2017 Female Player of the Year while Belgium’s Arthur Van Doren secured both Male Player of the Year and Rising Star of the Year, the latter for the second year in a row.
Van Doren was not the only star to build on last year’s success. Argentina’s Maria Jose Granatto won the Female Rising Star of the Year for the second consecutive year after picking up the same award in India just over 12 months ago.
England and Great Britain’s Maddie Hinch was another to secure back to back success as she was named Female Goalkeeper of the Year while Vincent Vanasch added to Belgium’s awards as he was voted Male Goalkeeper of the Year.
In addition to the athletes, awards were given to the best Coaches for 2017. Australian legend Alyson Annan won Female Coach of the Year as she led the Netherlands to both the Hockey World League and Rabobank EuroHockey Championship titles.
The Male Coach of the Year was split. Argentina’s Max Caldas, who steered Netherlands men to the Rabobank
EuroHockey Championship trophy, and New Zealand’s Shane McLeod, who guided Belgium to a triumphant victory at the Hockey World League Semi-Final in Johannesburg, South Africa, both shared this year’s award.
The world’s top officials were also recognised. Sarah Wilson from Scotland was voted by her peers as Female Umpire of the Year and South Africa’s John Wright, who retired after the Hockey World League Semi-Final in his homeland, won Male Umpire of the Year.
Whilst the Coach and Umpire awards were a result of a peer vote – the Player, Rising Star and Goalkeeper awards consisted of both a peer vote, which included fellow players and coaches, as well as a fan vote in which over 100,000 votes were received through the FIH website.

Speaking about this year’s awards, FIH President Dr Narinder Dhruv Batra said: “Tonight’s winners should feel incredibly proud of their achievements. Being named as the best in the world by peers and fans is the result of years of hard work, determination and sacrifice – attributes that have driven them to the top of the game.”

He continued: “In return they have not only earned success on the field, they have also played an incredibly important role in inspiring future generations. On behalf of the FIH and the hockey family, we offer our sincerest of congratulations and look forward to seeing them build on their success for many years to come.”