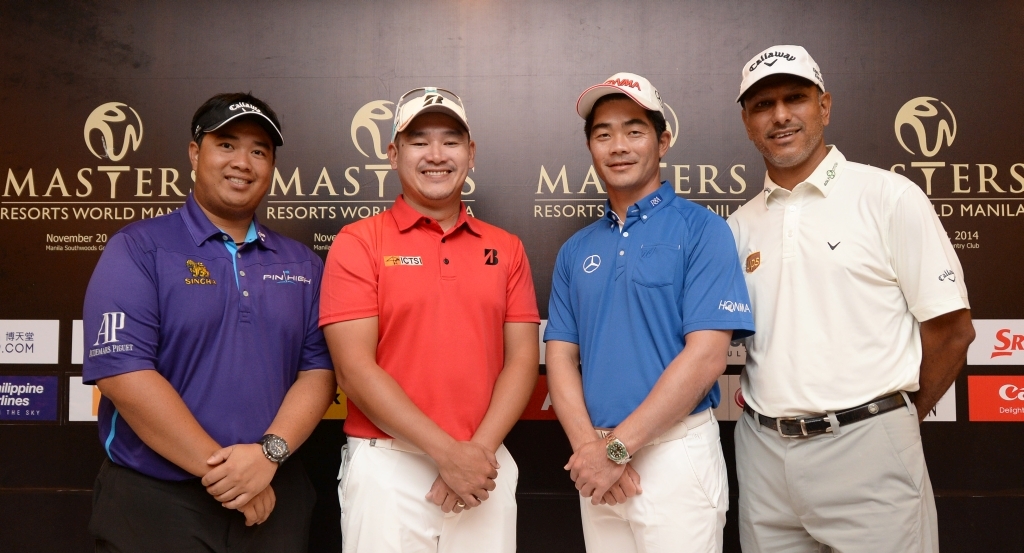 Filipino star Angelo Que hopes to ride on home ground advantage as he seeks to win the US$1 million Resorts World Manila Masters presented by 918.com which starts on Thursday.

The in-form Que, who has enjoyed three top-10s in his last four starts on the Asian Tour, headlines a stellar cast at Manila Southwoods Golf and Country Club which includes title holder Liang Wen-chong, reigning Asian Tour number one Kiradech Aphibarnrat of Thailand as well 14 of the current top-20 players from the Order of Merit.

“I feel at home here, it’s my home course and my home country. I’ve been playing solid the past few months and I’m looking forward to it. I’ve been working a lot with my coach yesterday and today and hopefully it would be the week where I’m going to do it,” said Que, who is fifth on the Merit list.

“I think we’ve got one of our strongest fields here in a full-field Asian Tour event this year. It would mean the world for me and my family if I can win it this week.”

At the inaugural Resorts World Manila Masters last season, the 35-year-old Que was the joint halfway leader before fading over the weekend rounds to settle for tied 25th position. But with a recent run which included a runner-up finish at the Hong Kong Open where he lost in a play-off and a tied eighth finish at the CIMB Classic in Malaysia which was jointly sanctioned by the PGA Tour, Que is brimming with confidence.

“My mind is stronger now, I’m thinking clearer on the course and making good decisions which helps a lot. I’ve made great decision and it’s the key to winning a golf tournament and finishing well,” said Que, who is a three-time Asian Tour winner.

Kiradech, who secured a fourth place finish in Chiangmai last week, is confident of challenging for Liang’s title in his first appearance in the Resorts World Manila Masters.

“The course is in good shape, small greens and nice fairways. It’s in fantastic condition right now. I’m been playing well the last couple of months except that I have not won titles. Last year, I wasn’t here so I’m hoping that I can win the title and I want to tell Liang that it won’t be easy to defend his title as we’ve got a strong field this week,” said the 25-year-old Thai, as he looked cheekily across the table to Liang during a press conference.

With the Manila Southwoods’ Masters course suited to long hitters, Kiradech hopes to make the most of his big-hitting game by claiming a third Asian Tour victory.

“I’m striking the ball well and hitting the ball on target. I hope my putting is good this week. I’m happy there’s not too much rough here so that I can whack it. I can reach most of the par fives in two here,” added Kiradech.

Liang, the only Chinese to become the Asian Tour number one in 2007, hopes to relieve the good memories from last year’s triumph where he came from behind to beat Thailand’s Prom Meesawat in a play-off before generously donating half of his winnings to the victims of Typhoon Haiyan, which had hit the Philippines a week prior to the event.

“It feels like yesterday that I won the Resorts World Manila Masters. I had very good memories from last year. I hope I’ve helped the victims in a way or another and I hope they are doing better now. It’s my pleasure to be back here and I look forward to a great week here,” said Liang, who arrived fresh off a fifth place outing in Japan last weekend.

“I know we have got a strong field but I’m feeling good about my game. I just want to enjoy it out there and hopefully I can successfully defend my title on Sunday.”

Liang, who started his career on the Asian Tour since 1999, sang praises for the development of golf in the region. “I’ve played on the Asian Tour for many years. It’s getting really competitive out here and it’s good to see young players coming out and winning on Tour. Golf is developing here in Asia. Players get to play in more tournaments now and prize money has grown over the years,” said the 36-year-old.

Indian star Jeev Milkha Singh, a two-time Asian number one, hopes a return to the Philippines which was the scene of his first two Asian Tour victories will help turn his golfing fortunes around where he currently languishes in 1,077th position in the world rankings.

“It’s been about 20 years since I came back here. I was only about 22 or 23 years old,” he recounted. “I’m glad to be back after so many years and it’s good to have gone through that rough patch which gives you the positive vibes and the good memories from the last time I played here. I hope to build on those and play my best this week,” said Singh, who has been ranked in the world’s top-50 previously.