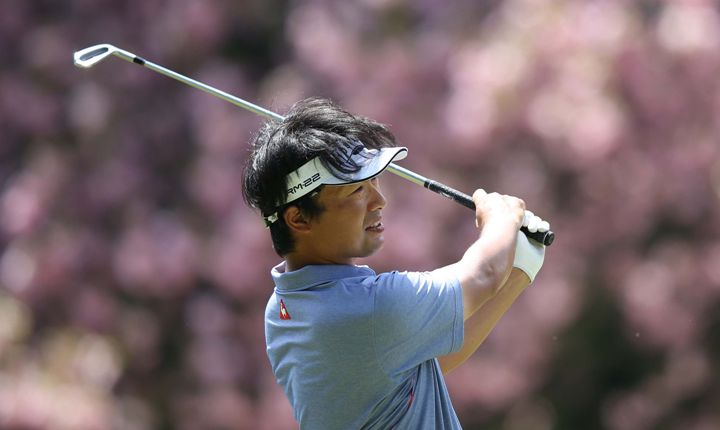 Japan’s Kodai Ichihara fired a sparkling six-under-par 65 to lead by one shot over newly-wed Shiv Kapur at the halfway stage of the Panasonic Open Golf Championship on Friday.

The ever-smiling Ichihara (main pix), who is chasing for a career breakthrough, matched the low round of the week to lead on eight-under-par 134 at the Chiba Country Club, Umesato course.

After taking a month’s break from golf to get married, India’s Kapur fired a solid 67 to be in prime position to end an 11-year title drought at the 150 million Yen (approximately US$1.27 million) event sanctioned by the Asian Tour and Japan Golf Tour.

Japan’s Azuma Yano was a further shot back in third place following a 69 while Hung Chien-yao of Chinese Taipei, also searching for a first win, registered a 67 to sit in fourth place on 137, three shots back from the leader.

Ichihara, who played on the Asian Tour from 2008 to 2013 before losing his card, fired seven birdies to edge closer to a maiden victory.

He hopes to make a return to the Asian Tour by winning this week after missing out on the chance to regain his Tour card through Qualifying School in the last three years.

“I created a lot of birdie chances and converted. That’s what you need to do for a low score and I did that. It was nice. It was a good round today, but my confidence is still high after shooting a good score in windy conditions yesterday (round 1),” said Ichihara.

“I have to focus shot by shot. I really want to get back on the Asian Tour so I can’t make silly mistakes. The bogey on seven was a bad mistake because I bogeyed the same hole yesterday,” said the Japanese.

Kapur overcame the blustery afternoon conditions by trading six birdies against two bogeys as he chases for his first silverware since winning the 2005 Volvo Masters of Asia in Thailand and earning the Rookie of the Year award in the same season.

“All the credit goes to the wife. I can’t deny that. Ever since I got engaged, I’ve been playing well,” laughed the 34-year-old Kapur, who married his wife Maya on the holiday isle of Bali on April 3.

“It was pretty good with the way the wind was blowing. It was tough to pick where the wind was coming from but I hope the conditions stay like this during the weekend. I’ve been playing in Europe for the last 10 years and I have the experience to play in a lot of wind,” he said.

China’s Wu Ashun, a member of Team Asia in the EurAsia Cup earlier this year, fired a 71 after struggling in the cold conditions on his homeward nine. He trails Ichihara by four shots.

“It was so sunny before I teed off so I decided not to take a sweater with me. It is still okay because I played quite well in this windy conditions. I’ll be happy if it stays windy during the weekend. I think that will give me a chance to make a move up the leaderboard,” said Wu.

The halfway cut was set at two-over-par 144 with a total of 78 players making the weekend.

Scores after round 2 of the Panasonic Open Golf Championship being played at the par 71, 7130 Yards Chiba CC course (am – denotes amateur):