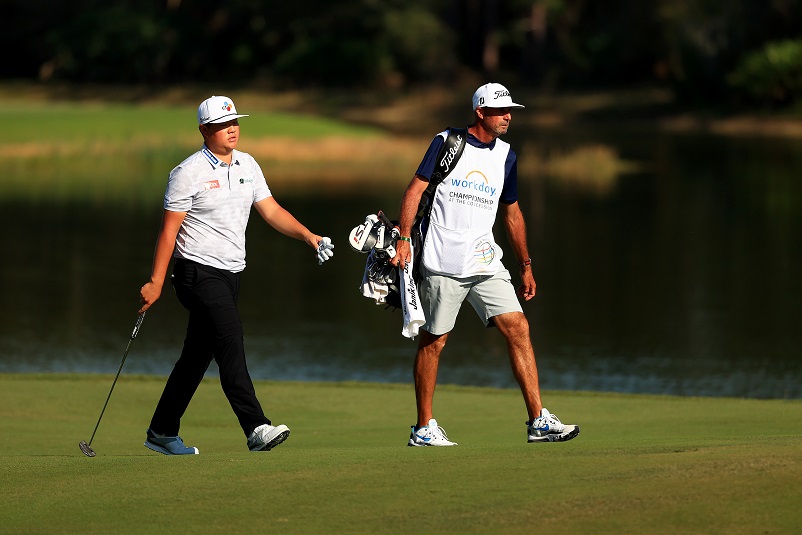 Korea’s Sungjae Im shot a solid 4-under 68 in the first round of the World Golf Championships-Workday Championship at The Concession to lie two shots back of co-leaders Webb Simpson and Matthew Fitzpatrick on Thursday.

Bidding to become only the second Asian to win a World Golf Championships title, the 22-year-old Im carded six birdies against two bogeys at The Concession Golf Club to end the day in tied seventh position.

Im, who won his first PGA TOUR title at The Honda Classic last March, was in typical rock-solid form as he hit 11 fairways and 14 greens in regulation and made birdies on Hole Nos. 2, 3, 5, 8, 15 and 17. His longest birdie of the day came on the fifth when he rammed home a 28-foot putt.

“I got some rest during my break and prepared well for the WGC this week. It was a pretty solid round and I hope to continue my form until the final day,” said the 22-year-old Korean, who began 2021 with five consecutive tournaments which yielded one top-five and two top 20s.

“The Concession course is new for all of us. The winds made it very difficult, but even without any wind, the course itself is not an easy one to play. The pin placements allowed me to attack some holes for my good score.”

Simpson, 35, birdied three of his last four holes en route to a 66 to post his first sub-par opening-round score in eight starts at the WGC-Workday Championship, which is a replacement event for the WGC-Mexico Championship. The seven-time TOUR winner is seeking his first WGC title in what is his 21st WGC appearance, with his career-best result being a runner-up finish at the 2019 WGC-FedEx St. Jude Invitational.

“Very pleased with the start,” said a delighted SImpson. “I worked on a couple things last week with putting alignment and with my driver and I saw good things from that today. You always want to see it first round back, but it doesn’t always happen that way, so I was happy to see like tough tee shots with trouble, really stepping up and making good swings. And made a lot of putts today, so that was a good feeling.”

The 26-year-old Fitzpatrick matched Simpson, with his 66 tying his lowest first round score in his PGA TOUR career. He entered the week in good form after finishing T5 at The Genesis Invitational last week.

“it was a good day, obviously played well last week. The golf course is in unbelievable shape. The greens are running about 12 on the Stimp, That’s great for me, I love it when it’s like that. I think it makes you think, this golf course, you’ve got to think about where you’re hitting your tee shots and your approach shots,” said the Englishman.

Defending champion Patrick Reed opened with a 68 while reigning FedExCup champion and World No. 1 Dustin Johnson endured a disastrous 77 which featured two double bogeys to end the day 11 shots back of the leaders.