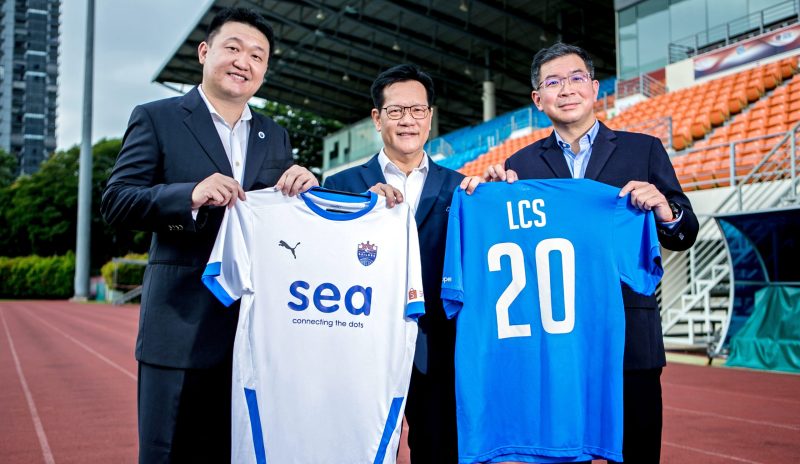 Lion City Sailors FC – formerly known as Home United Football Club – will make its debut in the upcoming Singapore Premier League (SPL) season under the new ownership of leading homegrown internet company, Sea. The club unveiled its new name, kit, and squad for the 2020 season, as it aims to achieve SPL success and spark a new era of development for Singapore football.

Sea, Singapore’s largest consumer internet company and parent of Shopee, Garena, and SeaMoney, is assuming 100% ownership of the club. Forrest Li, the founder, Chairman and Group CEO, of Sea, will serve as Chairman of Lion City Sailors FC.

Forrest said, “Sea is proud to be a Singaporean company, and we are proud to play our part in elevating Singapore football to the next level. By uniting with a club with a rich heritage, exceptional fans, and a great organisation, we intend for Lion City Sailors to set a new benchmark for footballing excellence in Singapore and the region. As a passionate fan myself, I know that Singapore has a huge community of people who love football, and our hope is that Lion City Sailors will strengthen that passion and ignite a new era for the development of the game locally. We look forward to supporting the development of Lion City Sailors and guiding this great club into a new period of success.”

Lion City Sailors represents a natural extension of Sea’s long-standing commitment to the development of Singapore football, which includes Garena’s sponsorship of the Young Lions in 2016. Forrest has also sat on the Football Association of Singapore Council since 2017.

Winston Wong, the outgoing Chairman of Home United, said, “We are proud of all that the club has achieved over the years, and proud to pass the baton over to Sea, a company that shares our passion for football, commitment to community, and focus on achieving success. Thanks to the hard work of the club’s management committee over the years, the club is in a strong position both on and off the field, and ready for the next phase of success with Sea. All of us are excited to see the club reach even greater heights in the years to come.”

Accomplished coach and star signings to ignite the 2020 SPL season

Lion City Sailors will be targeting domestic silverware and a place in the AFC Champions League. As it sets its sights on success in 2020, the Lion City Sailors coaching team will be led by Aurelio Vidmar, the former Socceroos captain. He joins after a hugely successful stint in Australia where he led Adelaide United to the 2008 AFC Champions League final, becoming the first Australian team to earn this distinction.

Outlining the club’s ambitions for the upcoming season, Head Coach Aurelio Vidmar said, “The players and staff have worked really hard over the pre-season to lay the foundations for success this season. This is a hugely exciting moment for the club and we will work hard to give our fans a lot to cheer about this season.”

The launch of Lion City Sailors is set to inject fresh momentum for the SPL, with the Football Association of Singapore (FAS) welcoming more corporate involvement that can invigorate the league. The FAS has identified this pilot project as an opportunity to build a sustainable model for local football that will encourage other corporate partners to follow suit.

The President of the FAS, Lim Kia Tong, expressed confidence that Sea’s involvement will strengthen the league. He said, “The FAS is committed to enhancing the professionalism of the SPL in order to establish it as a quality product. This pilot project is a significant milestone for the league as it enters its 25th season and marks a historical chapter that could potentially shape the future of the professional football landscape in Singapore. Sea has a proven track record of building and managing successful businesses, and the FAS has complete confidence in their ability to steer the club to new heights.”

Youth development will remain an integral part of Lion City Sailors’ DNA as the club looks to groom the next generation of talents and bolster the ranks of its senior setup, as well as the Singapore national team.

“We aim to provide our youths the best possible platform to pursue their passion for football and develop their talents,” Forrest added. Plans are in the works to enhance the structure of the current youth academy.

The new SPL season kicks off on 29 February 2020, where Lion City Sailors will take on defending champions Brunei DPMM at the Bishan Stadium.