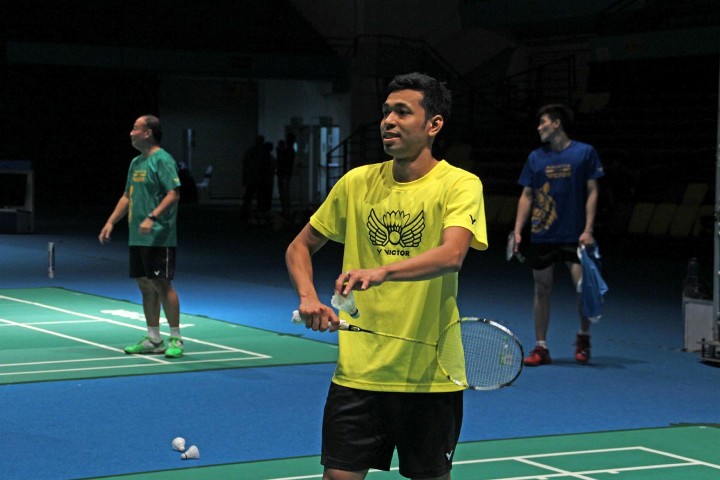 National champion Iskandar Zulkarnain Zainuddin is a confident and enthusiastic figure during a training session with other national shuttlers who are preparing for the Celcom Axiata Malaysia Open SuperSeries Premier which begins at the Malawati Stadium in Shah Alam on Tuesday.

The Johor-lad was forced to pullout from last week’s Yonex Sunrise India Open SuperSeries in New Delhi following a heel injury he sustained in the second round during the Swiss Open Grand Prix Open in Basel.

His injury has heeled and the smiles are back in the Malaysian camp. Iskandar has been jovial in training and sparring with “Abang” Datuk Lee Chong Wei, Chong Wei Feng, Goh Soon Huat with plenty of zest and drive in his game.

He wants to make the main draw in the Malaysia Open but he is also aware that he has a tough first round opponent in Indonesia’s Sony Dwi Kuncoro in the qualifying rounds which get underway on Tuesday.

Iskandar is 2-0 down in the head to head count but it has only made him all the more determined to get things right and hopes to be “third-time lucky” to kick-start his Malaysian Open campaign.

“I have recovered from the heel injury. It was painful when I sustained the injury in the Swiss Open…but since the pus was drained out the recovery was fast. Now I can train without worries,” said Iskandar after a sparring round with Chong Wei.

“Now I can jump and smash without fear. My movements on court do not pose me worries. My heel injury could be a blessing in disguise for me.”

If Iskandar clears the first hurdle against Sony Dwi Kuncoroi in the qualifying round the Malaysian will meet either Thai veteran Tanongsak Saensomboonsuk or Indian youngster Sameer Verma for a place in the main draw.