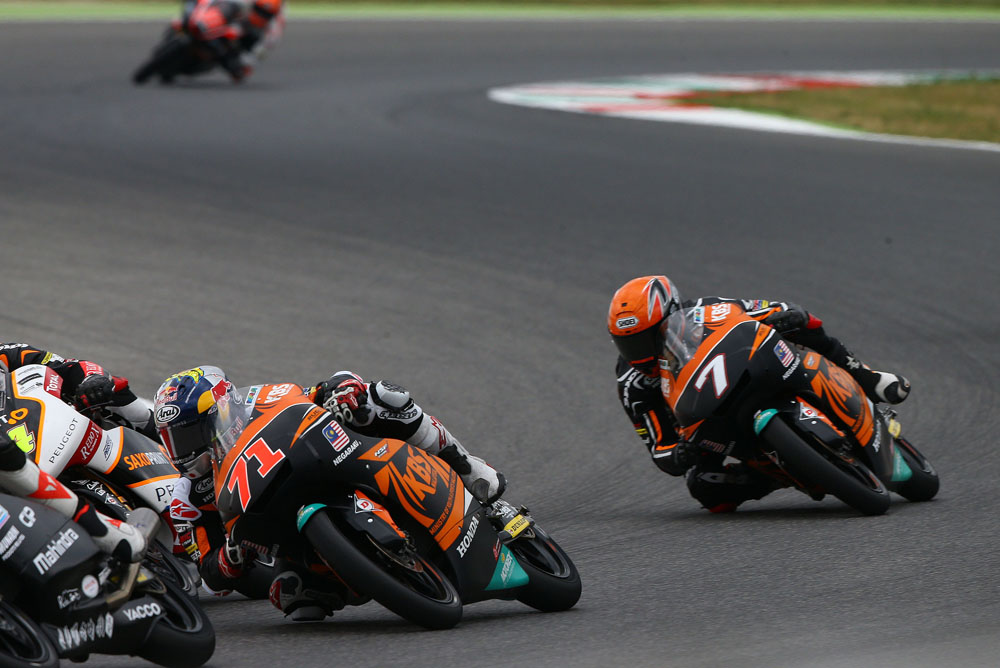 Starting from row eight on the grid, Sasaki made a blistering start off the line claiming six places on the opening lap. The determined sixteen-year-old relentlessly battled within the leading group, momentarily holding third place with five laps to go. Looking in strong form Ayumu Sasaki fought hard to cross the line in an impressive eighth place, scoring valuable points and elevating his position as the leading rookie.

Following a tough start to proceedings in Mugello, Adam Norrodin upped his game in today’s twenty lap race, posting his quickest time of the weekend and finishing just outside the points in a hard fought 18th place. The eighteen year-old Malaysian rider showed renewed confidence as he consistently battled for the points, retaining his position in the leading pack until the chequered flag.

Johan Stigefelt – Team Manager
“This has been a great race for us today. We saw this morning that Ayumu had very good pace and could use his bike a lot better than he did in the qualifying. This just shows that you should never give up. Both riders were in the top group today, which was great to see. Their times were very good and we could see how hard they were pushing.
At one point Ayumu came up to third place and looked very strong. He definitely had an opportunity to be on the podium. In the end he finished just seven tenths from first place and this is great. He defended his position and pushed until the very end, so we are very happy with this result. Unfortunately Adam couldn’t make it into the points today but it was still a very positive race for him. He has struggled from the start of the weekend but today he really came back fighting. His lap times improved a lot and he looked a lot better on track.
We are looking forward to Barcelona next week.”
#7 ADAM NORRODIN – P18
“I’m disappointed that we didn’t get points today but it was good to race in the big group. We knew it would be close here, so I’m glad I was able to improve my pace and go with them. I made a good start but I struggled a little on the straight because my gearing was a bit short, so I just pushed as hard as I could in the corners to make up for it. I’m happy that I could fight with the front group today but for sure I want to do better in Barcelona next week.”
#71 AYUMU SASAKI – P8
“I felt very good with the bike today; everything just clicked into place this morning and I knew I could push. I focussed a lot on adapting my riding style here and it really helped. In the race I felt like I could fight for the podium. I now know what I have to do to further improve my riding style and the plan for practice, so this is a big step in the right direction for me. I’m happy with eighth place today; it’s good but it’s still not what I want. We will try again harder in Barcelona. I know the track there much more, so I’m looking forward to this.”